A look at dividend payouts for the S&P 500

I thought I would take a look at the dividend announcements that are being made; and how the present situation compares to the past. I wish I had access to a longer history but, alas, I have to go with what I can find freely. Unfortunately, the numbers I could find at the S&P site are quite limited and misses the results from the 1974 bear market, which is probably closer to the current bear market in terms of severity (actually, I would like to compare to the 30's but that is too far back and there isn't much (free) information available from that period, let alone anything about dividend announcements.)

I don't generally care about dividends—my ideal company is one that does not pay dividends and, instead, re-invests in high return projects—but dividends do provide powerful signals. For instance, a company will generally avoid cutting its dividend even if it faces financial problems. Some executives and insiders even go so far as to issue debt to pay the dividend rather than cut it. The goal here is to attract passive dividend investors and newbie investors who invest blindly based on dividends. I have cited the crazy example of AIG, which issued shares while increasing its dividend in the first quarer of 2008, all the while the company was just about to implode. A lesser damaging example involves the Canadian banks, who have been issuing a ton of (mostly preferred) shares over the last year rather than cutting their dividend. On top of diluting shareholders, some of the preferred shares seem to pay more than the dividend on the common shares (i.e. cost of financing the common dividend is higher than if it was cut.) However, I will admit that tax treatment may make preferred shares less costly than they seem so the Canadian banks aren't destroying as much shareholder wealth as it seems. So any cuts or cancellations should dividends should be viewed as powerful signals.

For macro investors, dividends are also useful in providing a valuation benchmark. I prefer to use P/E ratios but some like to look at dividend yield as well. High dividend yield implies the market may be cheap while low dividend yield may mean it is expensive. As with any valuation measure, it's not fool-proof and can take years to impact the outcome.

One of the important things I wanted to look at was how present dividend announcements compare to past bear markets and economic recessions. Unfortunately, I couldn't find any data stretching back to prior bear markets. In fact, I couldn't even find data that goes to the 2000 to 2002 bear market :( So, my analysis here is not that satisfying (if someone has a Bloomberg terminal and has the same chart going back many decades, please e-mail it to me so that I can post it.) Anyway, the following chart plots dividend initiations, increases, cuts, and cancellations for S&P 500 companies: 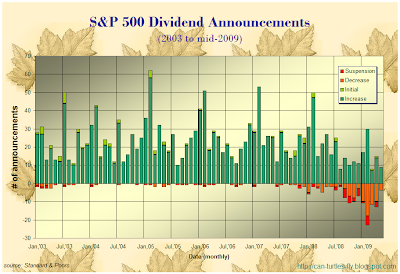 The chart plots the number of announcements so keep in mind that the same company may make multiple announcements. A lot of the negative changes likely come from financial companies. Because the data doesn't go very far back, it's hard to say how the present compares to the past. All we can do is to concentrate on the last two years.

Given how I suggested that dividend cuts or cancellations aren't undertaken lightly by management, we can assume that the huge number of cuts and cancellations in the last year will have long-term consequences. In other words, insiders and management of these companies likely forsee, not just a short-term decline in profits but, some serious problems that may lurk for a long time. They wouldn't cut the dividend just because they faced one or two quarters of weak profits.

Perhaps the most interesting thing to me is how most of the negative changes occurred this year. I had the feeling, and maybe others following the financial crisis too, that serious problems started developing way back in early 2008. It's amazing that companies didn't do much until this year. I'm specifically thinking of financial companies who were facing mounting losses in 2008 and yet probably didn't do much until the first quarter of 2009. A lot of consumer discretionary companies have also been in a bear market for over an year and may not have curbed their dividends (perhaps they were waiting for Christmas to save them?). Of course, commodity businesses only got hit in 4Q07 so I can see them not doing anything on the dividend front until this year.

If dividend announcements are more positive in the future, it may imply that we have hit a bottom. This is something one may want to watch to confirm their bottom thesis. I suspect it will lag reality by many months so one probably can't trade off that but those who aren't traders and not trying to hit the exact bottom can use it to confirm their views.

Anyone looking at historical P/Es, especially the 10-year P/E (aka CAPE), can easily see that the late 90's was a huge bull market with valuations hitting the stratosphere. Well, you can also look at dividend yields as another measure of market valuation.

Some argue that dividends may not behave like they did in the past because companies buy back their shares a lot more (share buybacks only took off in the late 1980's). I personally dismiss that view and do not think share buybacks significantly altered the landscape. One can figure out if share buybacks have changed the investing world by looking at the dividend payout ratio now versus, say, the 70's (for those not familiar, the payout ratio is the percent of reported earnings that are actually paid out as dividends.) The following chart plots the dividend payout ratio and the trailing twelve-month (TTM) dividend yield: 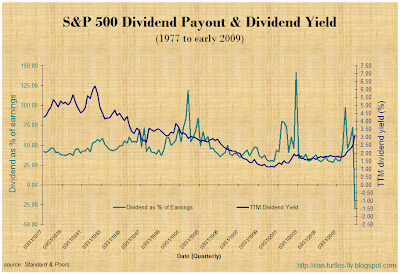 As you can see from the chart, the payout ratio hasn't changed much over the last 30 years. It has hovered around 40%, with some spikes during recessions. You get these spikes because earnings drop during recessions but companies, as mentioned before, try their best to maintain their dividend. As mentioned earlier, some companies issue debt to pay dividends—not good for shareholders—and you can see this with payouts above 100% in 1991 and 2003. It should also be noted that a payout over 100% doesn't necessarily mean every single company is paying out more than they are earning. Instead, all it means is that the market as a whole is paying out more than they are earning. If you are a stockpicker then it may not matter much as long the company you own isn't paying out more than it is earning; but if you are a passive investor who buys the whole market index, then it does matter that there is more being paid out as dividends than are being earned.

As for the negative payout ratio in the 1st quarter of 2009 (the last data point), that's because the earnings are negative for the S&P 500. It's really confusing and hard to say if the negative earnings—all of it due to financial companies—are "real" or not. Bulls argue that negative earnings produced from marking assets to market will be reversed in the future. Bears argue that they won't reverse and the losses are real. My feeling is that the marks will reverse but the degree of reversal is hard to ascertain.

The current yield of about 3% is back to the early 90's yield. If interest rates stay really low then stocks don't look that expensive. I think the yields will rise over time (although not any time soon) therefore dividend yields aren't high enough right now. If the dividend yield hits 4% to 5% then stocks are attractive for long-term investors (long-term bond yield averages about 4% so a dividend yield that beats that is generally favourable.) Issues such as political risk, inflation, taxes, and so forth need to be discounted for as well but I'm ignoring them.