Showing posts from February, 2017
Show all

( update Mar 5: Replaced the video with the list version which lists all the videos and added a URL link in case embedded video doesn't work. Actual video is the same but now it is easier to navigate to the other videos.) Here is a good Q&A with Charlie Munger that occurred after the Daily Journal meeting (refer to post from prior week for that). I like Munger because he is opinionated and speaks his mind, and these set of videos are great. I think there is more to be learned from these videos than the main meeting video. I am always impressed with how much knowledge Munger has. I'm amazed at how much he knows about topics that has little to do with him and doesn't invest in. Thanks to J. Bryan Scott for posting these videos. First few videos are short but they get longer afterwards.
Post a Comment
✖ READ MORE >>>

February 27, 2017
Talk about picking up pennies in front of a steamroller... The market becomes less and less attractive by the day so I'm mostly just doing research on various industries/stocks and tracking numerous special situations (mostly risk arbitrage). Even investing in mergers has become risky in my eyes because I don't have a good feeling for the new US administration. There is elevated risk of the US government blocking deals (particularly CFIUS blocking foreign deals). I don't recommend this to anyone who doesn't invest in Canadian dollars since the returns very miniscule compared to potential currency movements . So, unless you invest directly in C$ or can hedge the fx rate, this isn't a very safe deal. Anyway, I decided to take a position in the Manitoba Telecom Services (TSX: MBT) buyout by BCE (TSX: BCE). It's a cash and stock deal with maximum cash limit (prorated) so it complicates matters. The return is very tiny but it closes within a month. I have typic
Post a Comment
✖ READ MORE >>> 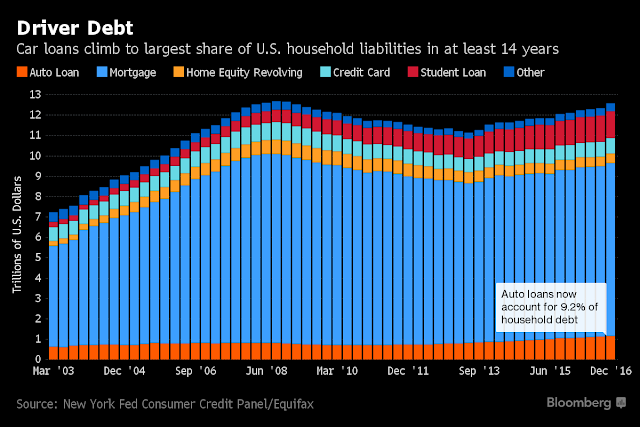 American Consumer Debt Since consumer spending is a huge driver of American GDP (almost 70% of GDP), it's a big deal for any investor. The same isn't true for some other countries where consumers aren't a big part of the GDP. Consumer spending is heavily influenced by consumer debt and here is how the picture stands right now. As can be seen from the very good Bloomberg chart (original source is New York FedRes I think), consumer debt shot up to around $13 trillion in 2008. After the financial crisis, debt declined, as mortgages shrunk. But as the economy improved in the last few years, it looks like debt has been increasing and is near the pre-crisis levels. (source: " Car Loans on the Rise as U.S. Households Borrow More: Chart ," Anne Riley Moffat‎, Bloomberg, February 17, 2017) Not easy to tell from the chart but the big changes in my opinion are the increased auto loan and student loan portions. Auto loans apparently stand at the h
Post a Comment
✖ READ MORE >>> 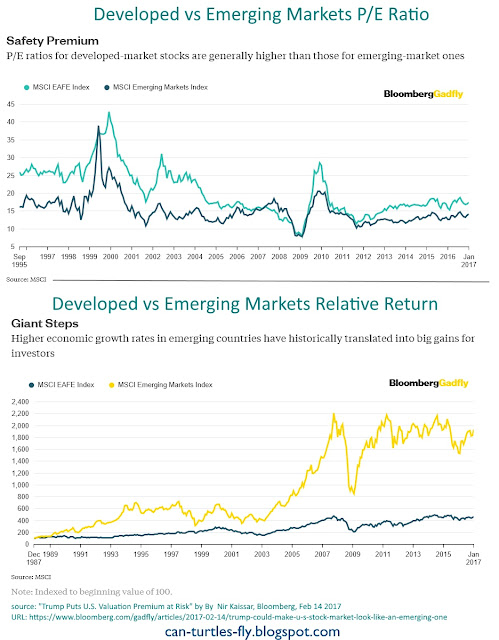 Emerging Market Valuations & Returns Most people already know this but emerging markets tend to have lower valuations and produce higher returns. The difficulty is that emerging markets have much higher valuations, with a few countries/regions experiencing catastrophic declines. If you can avoid those blow-ups then emerging market generally offer higher return potential. Having said all that, we had a massive global trade boom, with massive growth in developing countries--right from Brazil to China to Vietnam. It's not clear to me if we are entering a protectionist era where emerging markets, who tend to be exporters and hence will get hit asymmetrically during any trade war, will suffer for a long period, maybe a decade. (source: " Trump Puts U.S. Valuation Premium at Risk ," Nir Kaissar, Bloomberg, February 14, 2017)
Post a Comment
✖ READ MORE >>>

I don't really agree with many of Charlie Munger's political, and some business and economic, views, but the thing I love about him is that he is outspoken and doesn't care what people think of him. Munger hosted the 2017 Daily Journal annual meetings and here is a video someone shot, along with a transcript. The last part of the transcript file contains 2 articles written by Charlie Munger (possibly never published anywhere?) starting on PDF page 11. I haven't read them yet but if I find it interesting, I'll blog about it. I wish someone close to Charlie Munger or with access to his files publishes similar stuff that he wrote (especially when he was more active and at his prime in the 70's/80's) and is probably lost to time. It's going to be hard to get access or permissions to his writings once he isn't around (it'll be hard for his family or estate to tell what is confidential and sensitive and what's not). Some of Munger's thought
Post a Comment
✖ READ MORE >>> 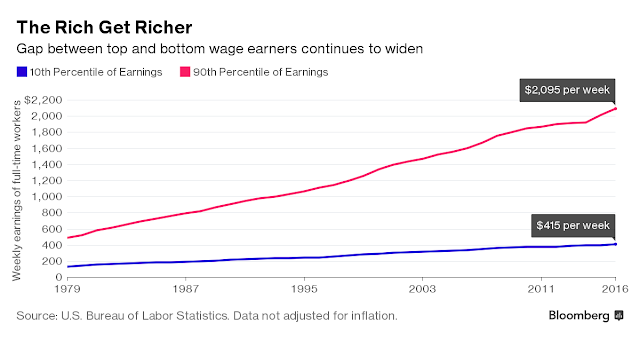 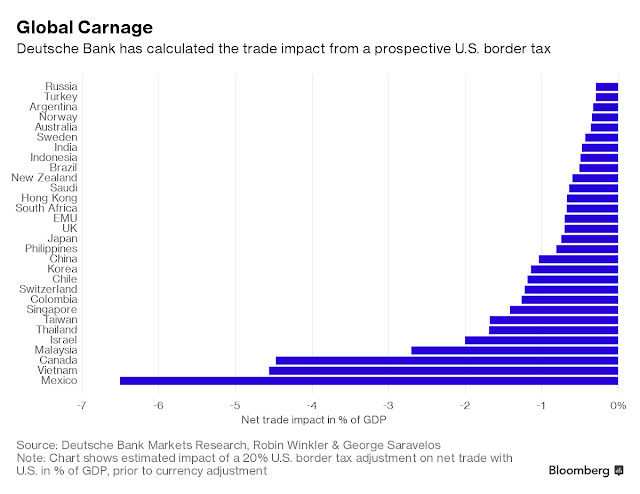 Potential Impact of US Border Tax Bloomberg recently had an article quoting Deutsche Bank report on the impact of the proposed American border tax--there are several ones being floated around but this report seems to assume 20% tax, which is closer to the Republican House position--and there was a nice graphic of the impact on various countries. The biggest negative impact is forecast to be in Mexico, Vietnam, and Canada. All three will likely enter a recession immediately (assuming retaliatory taxes offsetting the GDP contraction aren't enacted). For some reason the data doesn't seem to include China, which will probably be the #2 loser from such a tax. (source: " Here's a Glimpse of the Global Trade Carnage From a U.S. Border Tax ," Jeff Black, Bloomberg, February 1, 2017) When we are closer to the imposition of the US border tax, which seems almost certain under the Trump administration, I'll write a more detailed post but here are
Post a Comment
✖ READ MORE >>>

Articles for the Week Ending February 4, 2017

February 04, 2017
Certainly an interesting start to the year, with an unusual US presidency, FedRes tightening underway, US$ strengthening, and Chinese capital outflows still continuing (or at least seems that way). Some governments appear to be becoming nationalist and protectionist and we may be seeing the end of the global trade boom. I need to think about this more but it sort of resembles the change from 1910s/1920s to 1930s. Things aren't exactly the same but that period was also characterized by a trade boom--countries were different and Asia/Latin America didn't play much of a role--followed by extreme retrenching from global trade. I also have a feeling that labour (workers) may do better over the next decade while capital (investors) don't do as well (relatively speaking). Basically the opposite of the last decade (if you are interested in this thinking, read the Jeremy Grantham GMO letter). Note that everything I say is from a developed country (USA/Canada/Europe/etc) point of v
Post a Comment
✖ READ MORE >>>