Showing posts from September, 2010
Show all

I haven't talked him in a long time but even I am surprised by the boldness of it all. Phil Falcone, the contrarian investor whom I had likened to Wilbur Ross , is turning into someone else. In bold move that could make or break his reputation, Phil Falcone is betting as much as 40% of his partners' funds in LightSquared, a company trying to provide 4G wireless communications throughout America. The goal is to provide wholesale wireless services through a network of terrestial towers and orbiting satellites. Reuters has a lengthy story on Phil Falcone : Harbinger's two main investment funds are the owners of LightSquared, an upstart Reston, Virginia-based telecom company that plans to use two orbiting satellites to bring high-speed Internet service to some 260 million in the U.S. by 2015. Roughly $3 billion or 40 percent of Harbinger's assets are tied-up in LightSquared, say people familiar with the funds. Formerly known as SkyTerra Communications, the telecom co
2 comments
✖ READ MORE >>>

A graphic on the smartphone market

I have been researching Nokia lately and here is an interesting graphic. (On another note, I don't know if anyone else is researching Nokia but I just learned that Nokia Siemens, its equipment manufacturing subsidiary owned 50% by Nokia, is consolidated in its financial statements.) On top of the hard-to-see colours, I don't like charts that only focus on a small period, such as the two years in the following graphic. Nevertheless, it's an interesting graphic that captures the current state of affairs in the smarphone market. (source: gigaom )
Post a Comment
✖ READ MORE >>> 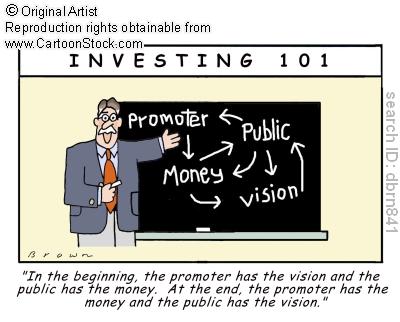 Some thoughts on Nokia

September 26, 2010
(Image by Brett Ryder. " The curse of the alien boss ," The Economist. August 5, 2010) The above pic comes from an article in The Economist and refers to Nokia's history. At one time, Nokia used to make rubber boots. In fact, the pre-cursor to the Nokia Corporation started off in 1867 as a forestry company. Nokia has gone through many changes over its 100+ year life. The question now is whether it can adapt and maintain, or possibly strengthen, its market position. Nokia is on my watchlist and I've been following it closely of late.
2 comments
✖ READ MORE >>> 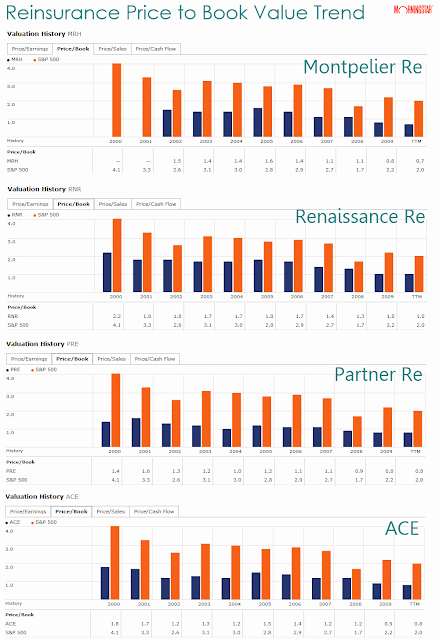 The only long-term "buy & hold" investment I have right now is a small-cap/mid-cap reinsurance company called Montpelier Re (MRH). I purchased it a few years ago and I'm slightly down overall, mainly because US$ declined against C$, and also because I made a newbie valuation mistake (I didn't know insurance companies should be valued based on book value.) In any case, in the last two years, I have thought about purchasing more shares. The company is very high-risk and is a black box (I have no clue what their insurance model is or how well it can handle adverse events) but I like how the company has been run in the last few years (management has bought back around 25% of shares in the last 3 years while shares were trading below book value). One of the most difficult things for newbies like me is trying to figure out what is a proper valuation for a company. One approach is to look at historical market value to the present but one can never be sure if there is a
3 comments
✖ READ MORE >>>

Longest US recession since the Great Depression ended in June 2009

September 20, 2010
An Associated Press story via The Toronto Star : The longest recession the United States has endured since the Great Depression ended in June 2009, a group that dates the beginning and end of recessions declared Monday. The National Bureau of Economic Research, a panel of academic economists based in Cambridge, Mass., said the recession lasted 18 months. It started in December 2007 and ended in June 2009. Previously the longest post World War II downturns were those in 1973-1975 and in 1981-1982. Both of those lasted 16 months. ... Any future downturn in the economy would now mark the start of a new recession, not the continuation of the December 2007 recession, NBER said. That’s important because if the economy starts shrinking again, it could mark the onset of a “double-dip” recession. For many economists, the last time that happened was in 1981-82. To make its determination, the NBER looks at figures that make up the nation’s gross domestic product, which measures the total
Post a Comment
✖ READ MORE >>> 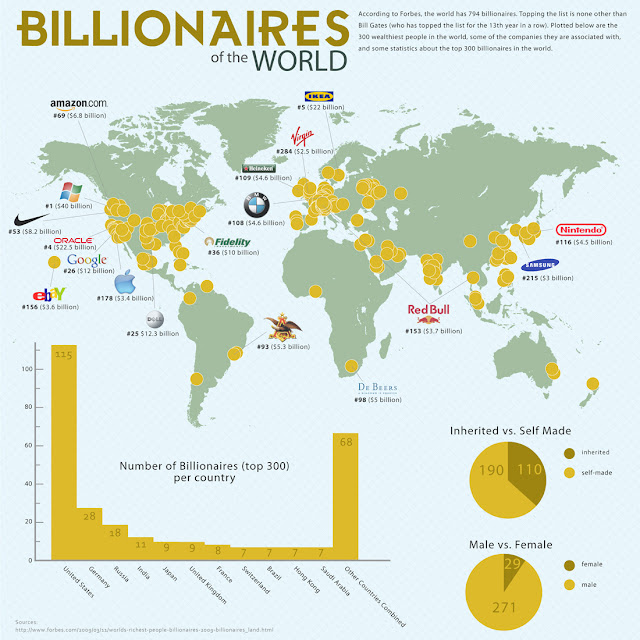 Toronto Film Festival is upon us—or at least anyone that cares around here—so I thought I would do a movie-related post. Here are some tables listing the movies with the top all-time gross after adjusting for inflation (US market only), top movies that never opened wide (not adjusted for inflation), and the top grossing genres since 1995 (not adjusted for inflation). Click on the images for a larger, more legible, one. Top Movie Gross - Inflation Adjusted (USA only) source: Box Office Mojo The industry has changed over time—importance of movies has declined over time due to competition from other entertainment—so many of the top grossing films of all time are from several decades ago. The top 5 in order are: Gone with the Wind (1939) [$1.6 Billion 2010 US$] Star Wars (1977) [$1.4B] The Sound of Music (1965) [$1.1B] E.T.: The Extra-Terrestrial (1982) [$1.1B] The Ten Commandments (1956) [$1.0B] Note that these numbers are for the US market only and it is highly unlikely that any
Post a Comment
✖ READ MORE >>>

Better to use P/E ratio without any interest-rate adjustment

September 03, 2010
I ran across an interesting article by Mark Hulbert on using the P/E to forecast future returns . Mark Hulbert cites a study by Clifford Asness, " Fight the Fed Model: The Relationship Between Stock Market Yields, Bond Market Yields, and Future Returns " (Dec 2002), that suggests that using a raw P/E ratio is better than using one that is adjusted by the interest rate .  Recall how many look at the P/E ratio (or its inverse, the earnings yield) relative to bond yields (or interest rates). The Asness study appears to show that the absolute P/E value matters most.
1 comment
✖ READ MORE >>>