Showing posts from March, 2017
Show all

March 28, 2017
Not sure if this an isolated event or a symptom of a possible Canadian housing bubble, but Home Capital Group (TSX: HCG), just terminated its CEO. I don't follow Canadian financials so not sure but I think HCG may be the largest alternative real estate lender in Canada. CBC News reports  (Mar 28 2017): Home Capital announced Monday after stock markets had closed that that Martin Reid, its president and CEO, was out, effective immediately. Investors responded by sending shares of Home Capital down $2.66 to finish at $25.06 on the TSX. Reid has been replaced by Bonita Then, a member of Home Capital's board of directors, until a new permanent CEO can be hired. "Home Capital requires leadership that can bring to bear a renewed operational discipline, emphasis on risk management and controls, and focus on improving performance," said Kevin P.D. Smith, the chair of company's board, in a statement. In February, Home Capital said it had received an enforcement n
Post a Comment
✖ READ MORE >>>

March 27, 2017
BCE (TSX: BCE) buyout of Manitoba Telecom Services (TSX: MBT) was successfully completed. I ended up with a return of about 1.8%, which is satisfactory. The best case outcome (if payment was 100% cash) of about 2.1% didn't materialize; instead, I ended up with a mix of cash and stock (original expectation was 0.7% but BCE shares rose (and I didn't hedge) so I gained about a percent from it). I wouldn't entertain these situations in the past but my portfolio is a little bit larger and transaction costs have come down a lot in a decade, so it is worthwhile for the time being. Sold: $59.06
Post a Comment
✖ READ MORE >>>

Is the Market Overvalued?

March 27, 2017
We are in a very unusual time in my opinion. Presently valuations are high--whether you look at P/E (or the inverse, earnings yield), P/Sales, stock market valuation to GDP, Q ratio, or whatever else you want to use--but many argue it is not a bubble. Generally, the majority can make seemingly plausible arguments for high valuations during the bubble (otherwise you wouldn't end up in a bubble in the first place) so the fact that consensus says there is no bubble doesn't mean much. However, what is different right now, is that the contrarians and those that believe we are in a bubble, can't seem to make a strong case. I think the reason is due to there being no psychological or behavioural elements that are driving the bubble--the mania is missing. I think what is happening is that the mania is not in stocks but in bonds. The bond market, which is larger than the stock market, has a big bubble. Investors are literally buying bonds without any regard for yield, with big c
Post a Comment
✖ READ MORE >>> 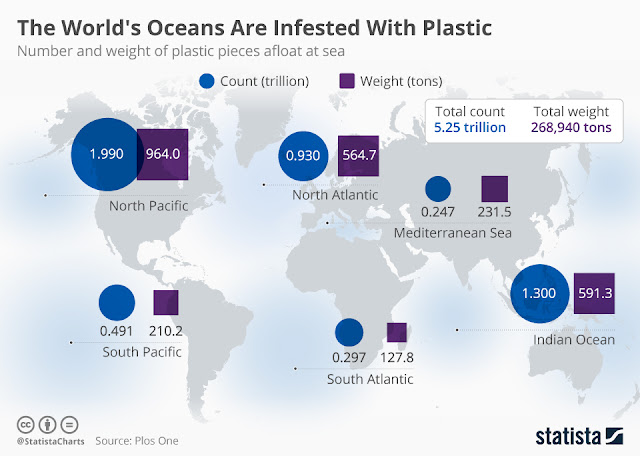 Plastics & Pollution A new environmental scourage created over the last 50 years has arisen due to the invention of plastics. Very useful and unique but plastics don't degrade in nature very easily. Unfortunately, they are starting to pollute the oceans on a large scale... source: " The World's Oceans Are Infested With Plastic " (Niall McCarthy, Statista.com, Mar 22, 2017)
Post a Comment
✖ READ MORE >>>

The Thing About Healthcare...

March 25, 2017
Adam Davidson of The New Yorker had a good opinion piece about why healthcare is so important and unlike anything else and I thought I would highlight some of his points here. I struggle with healthcare spending and government policy because, on the one hand, healthcare is spiraling out of control and growing way beyond inflation or economic growth (not just in USA but in Canada and most of the developed world actually); but on the other hand, it is so important that as Davidson alludes to below, it should really be thought of more as an investment in the long-run future of the country rather than an expenditure per se. Titled " What the G.O.P. Doesn't Get about Who Pays for Healthcare " (Mar 23 2017) and directly addressing the Republican Party in USA, Adam Davidson writes (as usual, bolds are by me): In economics, when a person has some money, they can do one of two things: invest it or use it to buy something they want to consume. Most of the time, they consume. T
Post a Comment
✖ READ MORE >>>

The Bizarre Case of Sears Holdings

March 23, 2017
Concerns that Sears (SHLD) is headed toward bankruptcy have been reignited. The company's shares closed Wednesday down more than 12 percent, falling below $8, after the struggling department store expressed doubt about its future as a retailer. "Our historical operating results indicate substantial doubt exists related to the company's ability to continue as a going concern," Sears said in an annual filing with the Securities and Exchange Commission. (source: " Sears tells investors nothing's changed, despite 'going concern' statement ," Krystina Gustafson, CNBC, Mar 22 2017) Headed for bankruptcy, right? Yet... Hopes raised by a chairman’s letter on future strategy March 9 were crushed Wednesday when Sears Holdings listed a “going concern” statement in its annual report. The same day, Bruce Berkowitz increased his position in the dying retailer 2.05% in his third purchase of the month. (source: " Bruce Berkowitz Buys More Shares of Sea
Post a Comment
✖ READ MORE >>>

March 23, 2017
Matt Levine of Bloomberg highlights how anyone can file anything on EDGAR , the SEC online report dissemination system (same thing probably can happen in other countries as well?). The person may still be criminally liable depending on what they file but that is after-the-fact, so one shouldn't blindly accept regulatory filings: The Securities and Exchange Commission's Edgar system for making securities filings is notoriously prone to hacking. "Hacking" maybe isn't the word; it's very low-tech. You submit an application to the SEC, have a notary stamp it, and get back your Edgar ID. Then you can just make whatever filings you want on Edgar. Want to say that you just bought Facebook Inc.? Sure, whatever, go right ahead, knock yourself out. Want to buy stock in a smallish public company, make an Edgar filing claiming that it's being taken over, and then sell your stock on the reaction to the fake news? Yeah that can sometimes work, though not as well as yo
1 comment
✖ READ MORE >>> 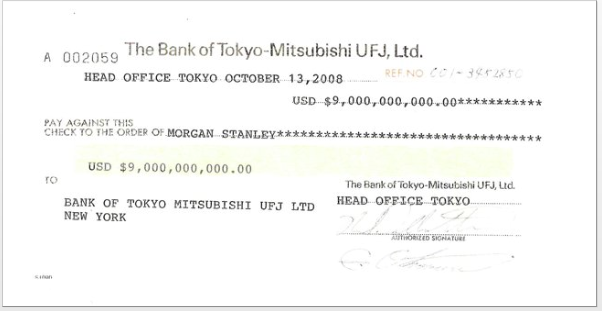 2008 Redux: Mitsubishi UFJ's $9 Billion Cheque to Save Morgan Stanley From Andrew Ross Sorkin: As detailed in Too Big to Fail: How Wall Street and Washington Fought to Save the Financial System — and Themselves , Morgan Stanley received a $9 billion investment from Mitsubishi UFJ in the fall of 2008 that kept the firm from collapsing. The payment was supposed to be wired electronically, but because it needed to be made on an emergency basis on a holiday, Mitsubishi cut a physical check, perhaps the largest ever written. Below is a copy of the $9,000,000,000.00 check.   source: Andrew Ross Sorkin website , November 20, 2009. URL:  http://www.andrewrosssorkin.com/?p=355 Great book by the way--Too Big to Fail. One of the best ones on the Financial Crisis. There is a lot of whitewashing--particularly Henry Paulson's actions during the crisis; and the whole George Bush administration, Ben Bernanke and some of the incompetent bank executives' actions before th
Post a Comment
✖ READ MORE >>> 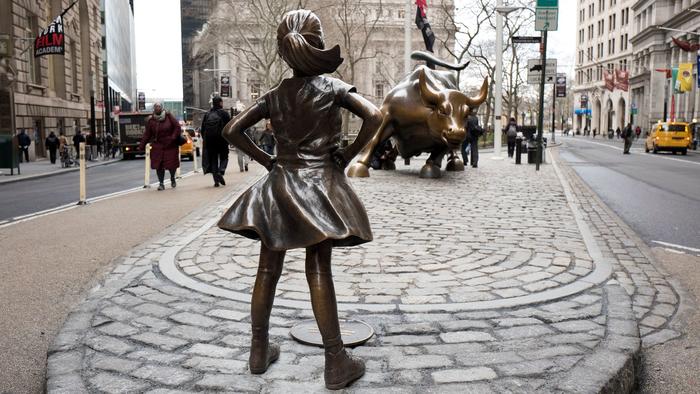 Charging Bull was controversial and this Fearless Girl statue is bound to be as well... Photo by Mark Lennihan for Associated Press; via LA Times, March 8 2017 ("Why there's a statue of a fearless girl facing Wall Street's 'Charging Bull' ").
Post a Comment
✖ READ MORE >>> 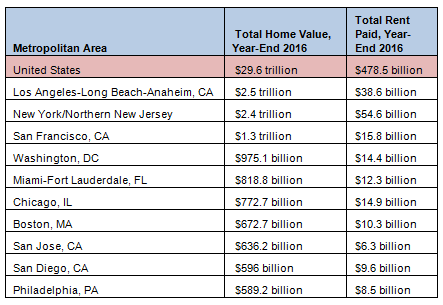 Value of US Residential Real Estate & Rent Not entirely sure how accurate the figures are but, based on computations by Zillow , Reuters reports that the total value of US residential real estate is around $29.6 trillion. Total rent paid is around $478.5 billion. The rental yield is only like 1.6% -- does that seem right? Anyway, here is the data. (source: " Data Dive: What $30 trillion will get you ," Beth Pinsker, Reuters, January 5, 2017)
2 comments
✖ READ MORE >>>

March 04, 2017
Various articles I encountered over the last few months that you may find interesting... (Recommended) " When Bankers Started Playing With Other People's Money " by William D. Cohan (The Atlantic, Feb 28 2017) --  (Except from Why Wall Street Matters by William D. Cohan) : When Wall Street investment banks became public: "On April 10, 1970, nearly a year after first filing its IPO prospectus with the SEC, DLJ pulled it off, raising $12 million from the public and as a result fundamentally altering how Wall Street has functioned ever since. “Going public changed Wall Street permanently and forever,” Richard Jenrette (the J in DLJ) told the Times. “If Wall Street had remained in a private mode, it would have acted like a club and been so vastly undercapitalized that someone would have taken it over long ago. There would have been no alternative but to have let the [commercial] banks take over”—something that the Glass-Steagall law, of course, had made illegal.&quo
Post a Comment
✖ READ MORE >>>