Showing posts from June, 2011
Show all

June 26, 2011
Vulture Investors Get a Bad Rap (Great speech by Danny Devito from the movie, "Other People's Money") I haven't seen the movie—speech doesn't reflect the type of moview—but this is one of the greatest investing-related speeches in any movie. It sort of touches on the conflicts between employees, investors, and government. Vulture investors never have a good reputation but they underpin capitalism.
1 comment
✖ READ MORE >>>

I ran across an article by John Hussman that illustrates the probability of Greek bond defaults (based on what the bond market yields imply): (source: " Greek Yields: 'Certain Default, But Not Yet'" by John P. Hussman, Hussman Funds Weekly Market Comment, June 20, 2011) From the article, First, even with yields on short-term Greek bills pushing toward 20% annualized, the implied probability of a near-term default is very low. Indeed, the only way that Greek yields would be consistent with even a 50% chance of default in the next 3 months is to assume a 95% recovery rate. That sort of default is highly unlikely, because it would do nothing to materially alter the overall debt burden. For plausible recovery rates, the implied probability of a near-term Greek default is less than 7%. Simply put, despite the strained political and social situation in Greece, the bond market is demonstrating very little concern about a near-term default. At the point that a near-term
1 comment
✖ READ MORE >>> 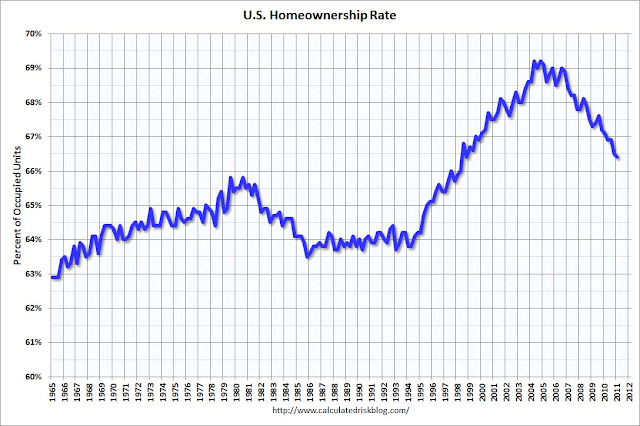 June 12, 2011
Here are some articles that I found interesting and insightful... (Recommended) "Stephen Elop's Nokia Adventure" (Bloomberg Businessweek): This is a good article on Nokia and its CEO, Stephen Elop. This article touches on why Nokia rejected Meego, its internal operating system, and also why Google and its Android platform was rejected. Anyone interested should check out the accompanying video and audio as well. Unfortunately for Elop, Nokia stock has fallen off a cliff and things aren't pretty. Investigation of Muddy Waters' allegations against Sino-forest (James' Analysis): Not sure who this person is but he seems to have started a blog with good analysis of the allegations by Carson Block of Muddy Waters. According to 'James,' some allegations appear incorrect while others may be plausible. I think the Sino-forest saga is only in chapter 1 and there is likely to be more to all this. Fundamentally-weighted passive investing and pure passive in
1 comment
✖ READ MORE >>> 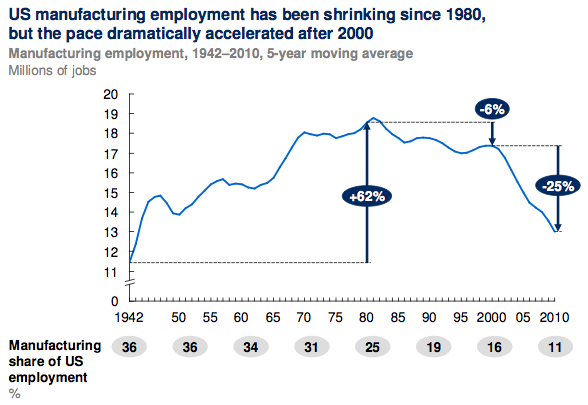 The Decline of Manufacturing in USA (source: " The Easiest Way to Understand Why We Can't Create Jobs " by Derek Thompson for The Atlantic. Content originally from " An economy that works: Job creation and America's future ," McKinsey Global Institute)
Post a Comment
✖ READ MORE >>>

Sino-forest sells off... potentially the biggest Chinese RTO scandal... and one of the biggest in Canada 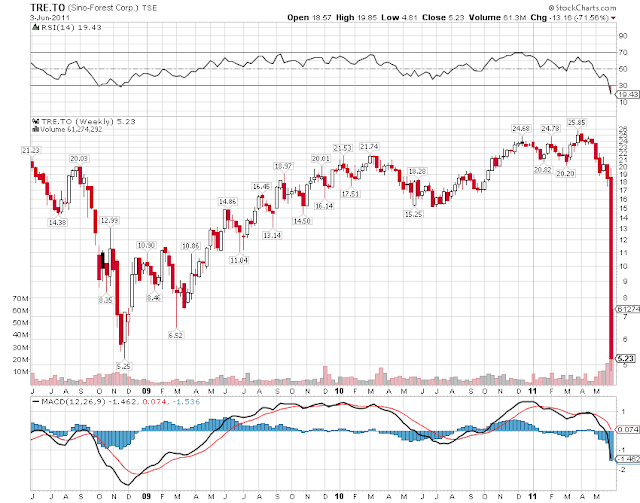 NOTE: Do not construe anything written below as implying that Sino-forest is a fraud. I'm simply repeating some who are presenting information that casts doubt on Chinese RTOs, including Sino-forest. Their opinions may or may not be correct. Future of stock price movements cannot be predicted with certainty. As I and others have mentioned, it appears that a big number of Chinese RTOs (reverse-take-overs) are dubious and in some cases, outright scams. So far, most of these have been micro-caps and small-caps. However, one of the bearish research firms, Muddy Waters Research , has tackled a bigger company, Sino-forest (TSX: TRE), whose market cap before the recent sell-off was around C$3 billion. Sino-forest is a forestry company listed on the Toronto Stock Exchange—it was actually a darling of some commodity investors a few years back—with operations largely in China, with some marginal stake in New Zealand. A few days ago, Muddy Waters Research published an extremely bearish 19
Post a Comment
✖ READ MORE >>>