Showing posts from March, 2011
Show all

March 30, 2011
The Wall Street Journal has some notes on Daid Sokol's character : The 54-year-old Mr. Sokol and Mr. Buffett have much in common. Both men live in Omaha, worked as newspaper-delivery boys and grocery-store employees. Early in his career, Mr. Buffett succeeded with a famed private investment partnership. Mr. Sokol was the chief of an energy company while he was still in his twenties. But Mr. Sokol's hard-charging personality is a contrast to the folksy popular image of his boss. Mr. Sokol, chairman of Berkshire's MidAmerican Energy Holdings Co. utility operation and CEO of jet-rental company NetJets Inc. until he resigned late Monday in a letter to Mr. Buffett, was known for coming into the office at 6 a.m. and seldom taking vacations. In a self-published 2007 book on management style, "Pleased But Not Satisfied," Mr. Sokol attributed his relentless work to a "driving fear of failure." "Early in my career, I recognized that I was not always t
2 comments
✖ READ MORE >>>

March 30, 2011
A very surprising move : Berkshire Hathaway Inc. said late Wednesday that David Sokol resigned after it came to light that he bought millions of dollars in Lubrizol Corp. shares shortly before urging Chairman Warren Buffett to buy the company. Sokol was considered a possible successor to Berkshire Chairman Warren Buffett. Sokol is chairman of several Berkshire Hathaway subsidiaries. Buffett said that he was surprised by Sokol’s decision and stressed in a statement that he and Sokol don’t consider the Lubrizol trades “unlawful.” Buffett said that Sokol told him that the trades were not a factor in his decision to resign. “It is my goal to utilize the time remaining in my career to invest my family’s resources in such a way as to create enduring equity value,” Sokol wrote in his letter of resignation, according to the statement. Sokol had talked about resigning twice before, most recently about two years ago, according to the statement. Here is a letter by Warren Buffett o
Post a Comment
✖ READ MORE >>> 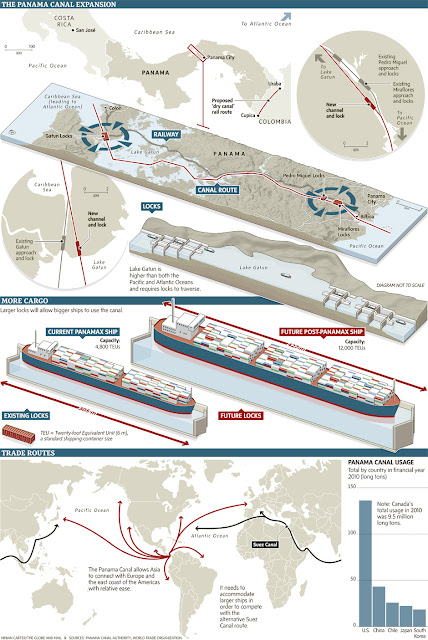 A quick note about the evolution of the hotel industry

March 22, 2011
I always like reading about how certain industries evolved over time—partly to see how the business economics had changed over time; partly to see how life used to be. I ran across an interview with the founder of the Four Seasons hotel chain and he briefly touched on how the hotel industry has changed.
Post a Comment
✖ READ MORE >>>

Opinion: Should auditors provide interpretation in the accounting statements?

March 20, 2011
The way the accounting profession is going, it may very well end up like the legal profession. What I mean is that, once upon a time—say a hundread years ago—lawyers were respected individuals; Abraham Lincoln was one and many were held in high regard. Right now, the public has a very negative perception of lawyers. Some even claim they are not helping society very much. If you are a lawyer, you still earn above-average (relative to the whole economy) compensation but the respect you get is nothing like it used to be. My feeling is that the accounting profession may head in that direction. There have been quite a number of crises of late—the recent accounting by financial firms and the fraud at companies like Enron and Worldcom a decade ago come to mind—which the auditors didn't catch. The auditors are well-paid professionals that earn above-average compensation but if they are incapable of flagging serious accounting problems then why are shareholders paying them so much? Writ
Post a Comment
✖ READ MORE >>>

Barron's is bullish on Japan 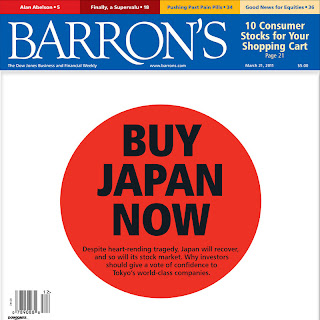 Now that a major publication is bullish on Japan, I suspect it isn't much of a contrarian call anymore. In fact, it didn't seem like much of a contrarian call last week during the thick of the crisis. The article appears to be free so anyone interested in Japan should check it out . There is a list of stocks and ETFs (not shown below) that are mentioned in the article. Unless you are a macro investor, I would stay away from the ETFs and CEFs. Many Japanese companies are worth more dead than alive... and that's the problem for investors.
Post a Comment
✖ READ MORE >>>

Some articles to kill your time

March 20, 2011
Here are some articles I found interesting. Not in any order... Disclosed Fairfax e-mails show short-seller attacks on company (The Globe & Mail): More details from the bizarre situation from a few years ago. It's amazing what some short-sellers will do. Daniel Loeb from Third Point doesn't come out looking good, that's for sure. (Recommended) Jacob Wolinsky interviews Roger Lowenstein (Jacob Wolinsky for GuruFocus): Newbies may not be familiar with Roger Lowenstein but he is one of the top (business) authors of the last few decades. He is most famous for writing a biography of Warren Buffett. (Recommended) The high-profit-margin risk (Vitaliy Katsenelson for GuruFocus): Many who are bearish, including me, are most concerned, not with earthquakes, wars, and the like, but, with the seemingly high profit margins of American companies. This article runs down the author's view of the risk. WikiLeaks cables - US diplomats' view of BYD (Reuters via The Star)
Post a Comment
✖ READ MORE >>>

Deleveraging in America (source: " The Leveraging (and Deleveraging) of America ," New York Times, March 18, 2011. Graphic accompanied the article, " A Shift in the Balance of Debt Obligations " by Floyd Norris)
Post a Comment
✖ READ MORE >>>

Is Japan really cheap? Not quite... but there is huge divergence in specific stocks 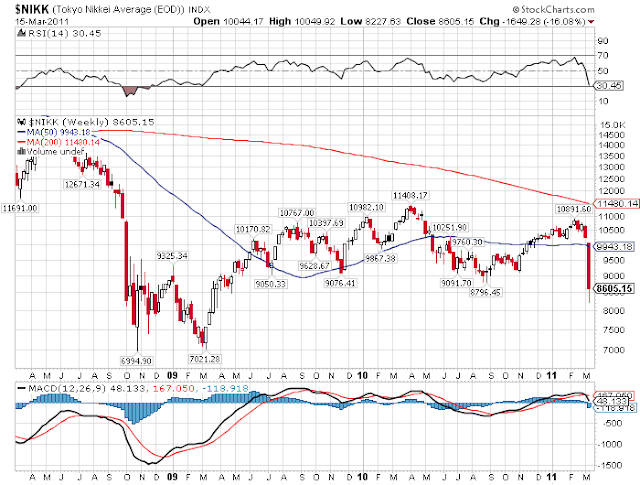 (This post was written yesterday (Tuesday in Canada) and given the huge moves in the Japanese stocks in the last few days, some of the numbers may have changed quite a bit. Japan rallied strongly yesterday but I suspect it will sell off today given how the US markets were off today.) If you're feeling brave, how do you fancy investing in the Japanese stock market right now? The Tokyo Stock Exchange plunged more than 10 percent overnight. It has now fallen by a fifth in the three trading days since the earthquake first hit. This is the scariest stock market on Earth. It's one of the fastest market collapses in history, comparable to 1929 and 1987. But Japan is still the world's third biggest economy - and a much better one than many imagine. (More on that below). So is this the time for the brave to start buying? — Brett Arends Writing for The Wall Street Journal , Brett Arends wonders if Japan is attractive—at least for those that can tolerate the risk. The Nikkei
3 comments
✖ READ MORE >>> 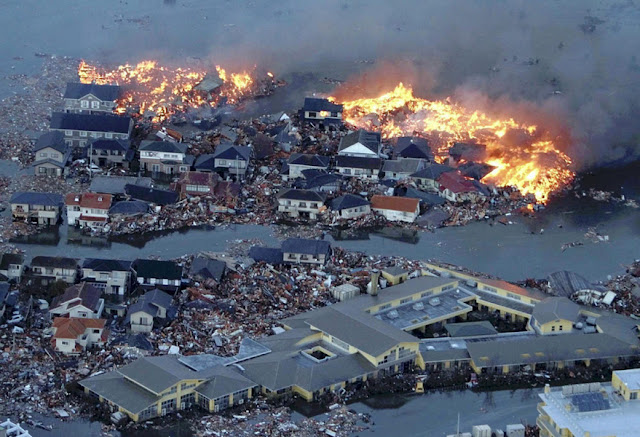 March 12, 2011
(Correction to the last sentence made on April 12, 2011, 9:45PM EST) Perhaps the biggest investment-related corporate trial in 20 years, the insider trading charges against Galleon hedge fund manager, Raj Rajaratnam, just got underway. The New York Times' DealBook has good coverage of the case and some of you may find it interesting. Unlike many other trials, prosecutors have lengthy recorded conversations and you can listen in on them. Although brief, it sort of gives an idea of what happens in some of these (trading-oriented) hedge funds. Here are some articles you may find interesting: Accused insider trading network (according to SEC) Who will be called to the stand? Recap of first day of the trial Select audio recordings Transcript of trader talk One good thing about fundamental investing is that tips don't necessarily make or break you, since you are in it for the long run and short-term price movements are a small bump on a long-term chart. However, the diffe
Post a Comment
✖ READ MORE >>> 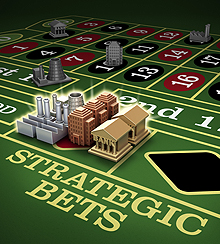 (Source: Illustration by Peter Kraemer for Strategy+Business. " Strategic Bets ," Strategy+Business, February 7, 2011) There is a pertinent story about a man who was working on an oil platform in the North Sea. He woke up one night from a loud explosion, which suddenly set his entire oil platform on fire. In mere moments, he was surrounded by flames. Through the smoke and heat, he barely made his way out of the chaos to the platform's edge. When he looked down over the edge, all he could see were the dark, cold, foreboding Atlantic waters. As the fire approached him, the man had mere seconds to react. He could stand on the platform, and inevitably be consumed by the burning flames. Or, he could plunge 30 meters in to the freezing waters. The man was standing upon a "burning platform," and he needed to make a choice. He decided to jump. It was unexpected. In ordinary circumstances, the man would never consider plunging into icy waters. But these were not ord
4 comments
✖ READ MORE >>> 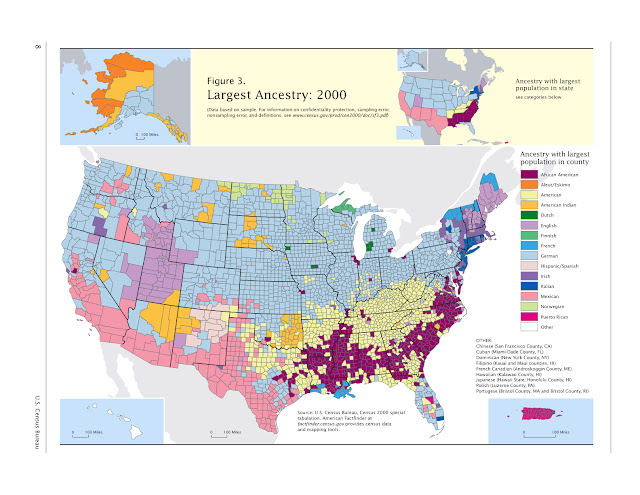 US Ethnicity (self-identified survey) (source: 2000 US Census. Downloaded from VisualizingEconomics.com ) Canadian Ethnicity (self-identified survey) (source: 2006 Census. Downloaded from wikipedia.org ) The maps here are flawed but I thought I would show them anyway since they are interesting. Since the maps plot self-identified results, they may or may not be reflective of the truth. Furthermore, respondents can write in anything so ethnicities such as "American" and "Canadian" can mean anything.
Post a Comment
✖ READ MORE >>>