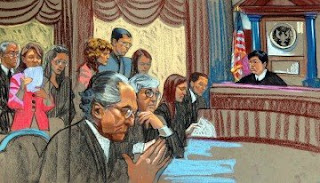 Bernard Madoff at his sentencing

Verdict in the biggest scam of all time...The Globe & Mail picks up an AP story:

Convicted swindler Bernard Madoff was sentenced to 150 years in prison Monday for fraud so extensive the judge said he needed to send a symbolic message to those who might imitate his fraud and to victims who need relief.

Applause broke out in the crowded Manhattan courtroom after U.S. District Judge Denny Chin issued the maximum sentence to the 71-year-old defendant, who said he sought no forgiveness and knew he must live “with this pain, this torment, for the rest of my life.”

Speaking after his sentencing, Mr. Madoff acknowledged the betrayal he perpetrated and the suffering he caused his investors and his family. “I cannot offer an excuse for my behaviour,” he said. “How do you excuse betraying the trust of investors who entrusted me with their life savings? How do you excuse lying and deceiving your wife who stood by you for 50 years and still stands by you?”