June 02, 2009 contrarian
Given the massive rally we have seen in the last few months, I thought it would be worthwhile to see how various industries have performed. There are many different indexes one can use but I use the Dow Jones US industry sectors given how I can easily access them from the WSJ Market Data page. If you are a professional or an amateur with access to diverse data, it is probably better to use the S&P industry classification system or the FTSE industry system since they are more widely used--I can't think of too many others that use the Dow Jones industries. One should also be careful with some of the industries because they contain less than 5 stocks.

I like looking at industry performance because I'm trying to develop my skill as a contrarian investor. In order to do that, you need to have a sense of what industries, sectors, countries, or styles, may be overvalued and what may be undervalued. Momentum investors will favour industries that have performed strongly whereas contrarians like me are attracted to poorly performing areas. Of course, one can never be sure what is overvalued or undervalued but something that has rallied strongly is possibly overvalued (if it's not overvalued then it is in a secular uptrend and that may be useful knowledge as well.)

Long time readers may also notice that some of the industries that have showed up near the bottom have been classic value traps. If you are attracted to the poorly performing sectors, you have to be really careful to avoid industries facing secular declines or other serious problems. It is ok to invest in questionable industries—many investors such as Walter Schloss has made a living off industries that one may think of as a complete waste of time; David Dreman's writings have also shown how poorly-performing stocks have outperformed—but, in the last few years, I have learned that one should wait and see how things progress. Readers may recall my interest in homebuilders, forestry companies, and cyclical industrials, among others, and how they have declined much further than what seemed cheap a few years ago (even without a stock market crash, they would have declined, although not to the same degree.)

The following table lists the best and worst industries in the last three months. This roughly approximates the bottom that was set a few months ago. The table should give an idea of what has been rallying off the bottom. 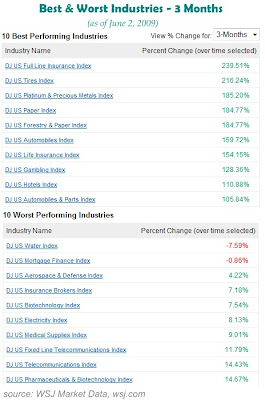 Perhaps not a surprise given the massive rally, but only two sectors (water and mortgage finance) posted negative returns in the last 3 months. Given the across-the-board rally in almost everything, there isn't anything for contrarians here.

The best performers are mostly cyclicals (tires, paper, forestry & paper, autos, etc). Some may find it bizarre that something like autos and auto & parts have done so well but it is generally normal for cyclicals—they tend to be very sensitive to the economy—to rally if economic forecasts improve. Precious metals have also done really well (3rd best) and this is probably due to shift of investor sentiment from deflationary to inflationary expectations.

The YTD charts are more of a mixed bag: 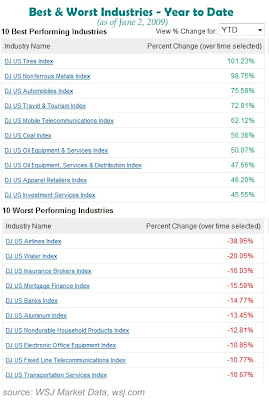 Nothing really stands out for me. Some of the energy-related industries have rallied and that makes sense given the run-up in oil and various other commodities. A contrarian industry to consider is airlines, which are down 38.95% for the year. A lot of airlines tend to go bankrupt during recessions so one needs to avoid those. Airlines will probably get hit really hard if oil prices keep going up but they will likely do extremely well if oil prices collapse.

Another interesting one that stands out is the -20% performance of the water industry. Someone that is bearish on the economy want to consider something like the water industry since it will likely hold up better, and is down for the year. Without doing research, I'm not sure if the decline this year is because it ran up too much last year (many defensive ones rallied strongly or at least held up really well last year.)

The prior two charts are only a starting point for developing an investment thesis; one really can't tell what's contrarian from 3 month or 5 month performance. The following table, which shows industry performance for the last 5 years is really the one to develop some serious contrarian ideas. 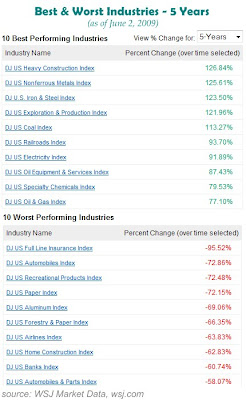 Shouldn't be a surprise to anyone how practically all of the top 10 are industries that depend on or sell commodities (except the electricity industry.) As someone who tries to be contrarian, I would avoid everything in the top section listing best performers (the only exception might be railroads and electricity.) The gains for the top ones may not seem spectacular but remember that this is after the massive crash from 2007 to 2009. A few years ago, before the crash, these industries were sporting unbelievable returns. The spectacular returns posted by many of the commodity industries is one reason I turned bearish on them a few years ago. This is not to say that these industries won't post good returns in the future—Jim Rogers suggests that commodities will stay in a bull market for another 5 to 10 years—but I follow the thinking that 'leaders of past bull markets won't be the future leaders'.

The bottom industries are a total disaster. Anything that posts -70% or worse will essentially bankrupt you. The usual suspects make this list. They range from insurance and banks; to foresty and paper; to home construction; to autos and airlines. Needless to say, airlines have been a disaster for investors since the airplane was invented so that's nothing new. Some of these, such as forestry & paper, and recreational products, may be facing secular declines. It is also possible that some of the financials like banks and insurance may be entering a secular decline.

The interesting industries that may be worth investigating are autos and auto parts. There is an industry shake-out in the works and it's possible that the industry may be strengthened once it's all said and done. The strategy I would pursue is the 'king of the hill' or 'last survivor'. That is, a lot of companies are going to go bankrupt or get taken over, and your goal is to find the strong survivor that will gain market share and hopefully increase profit from all this chaos. The risk with autos is that there may be an overcapacity problem, at least in North America, and government intervention may retain the excess capacity. So far, the actions of GM—shutting down brands, closing many dealerships, etc—will take capacity off-line and is good for the profitability of the industry. I'll start looking into autos and will post something if I find anything worthwhile.