June 17, 2009 Comdisco (OTC: CDCO)
One of the risks with liquidation is that the shareholder value can erode over time. This may occur because realized value for assets may be lower than originally estimated—this doesn't apply to Comdisco but imagine the estimated liquidation value of real estate in 2007 versus now—or because of errors with accounting statements. Due to some minor errors in the accounting statement and lowered expectation of future gains from sales, Comdisco's potential payout for the Rights holders has declined slightly whereas the overall shareholder payout has increased slightly (negligible amount.) The following graphic shows the financial statements from 4Q 2008 versus 1Q 2009: 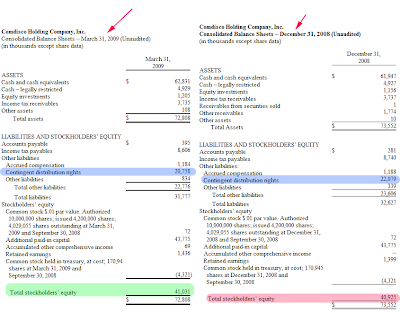 Note that the numbers in the financial statements—unaudited by the way—may not be the final outcome. Nevertheless, it gives an estimate and I rely on it.

In this case, the amount Comdisco has set aside for the Contingent Distribution Right liability has declined from $22,079,000 to $20,758,000. This is a 6% decline and is quite sizeable if you consider the fact that the market is barely up 6% this year (but, although it's somewhat sizeable, it isn't very large compared to the 58.2%liquidation estimate I came up with.)

As for book value, it increased by 0.2% so shareholders gained a bit, although it's insignificant.