In a comment to one of my posts, Mark Carter, who incidentally appears to have a good blog worth checking out, asked:


I have vaguely indicated how I view Warren Buffett in the past, but I thought I would detail my view of his investing behaviour. This is more of an opinion piece and many others would disagree with me (if you do, I'm curious to hear your thoughts). I don't follow Warren Buffett as closely as many value investors so I may get some facts wrong.

My view is that Warren Buffett went through three different phases, with each consisting of different investment techniques. The overall investment theory remained the same—what people call value investing—but his execution, tactics, and strategy differs across the three phases. Some people may break up his career into additional periods but my feeling is that the three I will describe essentially captures the styles.

I should also mention that I'm painting with a broad brush and some elements overlap across periods. Furthermore, certain investment techniques, such as special situation investing (such as risk arbitrage), has been carried out by Buffett over his entire life; what I am describing is his core investment technique.

In percentage terms (and hence, in terms of "skill"), Warren Buffett had his strongest return during his early days when he ran a hedge fund. He posted 13 years in a row with no loss and significant outperformance during the 1950's and 1960's (data below from The Superinvestors of Graham-and-Doddsville). 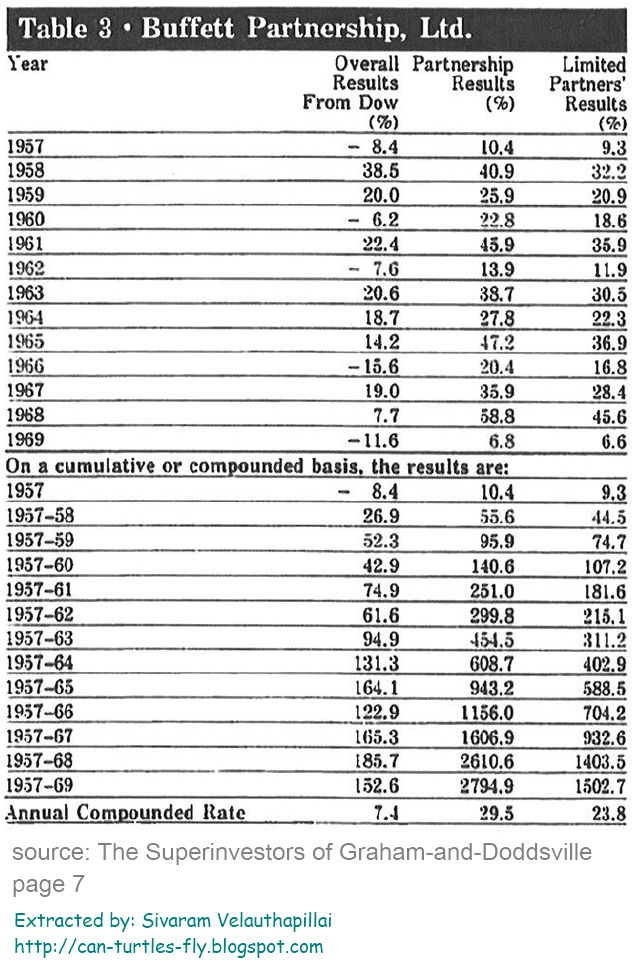 As you can see, Warren Buffett posted no losses, even when S&P 500 was down; and returned 23.8% for limited partners versus DJIA's annual return of 7.4%.

During the early days, Warren Buffett was essentially what I call a classic value investor. By this, I mean anyone who closely follows the Benjamin-Graham-style investing. Namely, this type of investing has the following characteristics in my opinion:
For, perhaps, the first 20 years of his investing life, Warren Buffett was a classic value investor (on top of dabbling in risk arbitrage and the like). Buffett generally bought companies trading way below intrinsic value (usually at 2/3 or 1/2 of their intrinsic value) and then sold them when price rose to intrinsic value.

Warren Buffett didn't diversify very much but many classic value investors diversify a lot because many of the firms they buy are dubious businesses. Even if a few blow up, you'll be fine if you have numerous holdings. If you buy a company trading at 50% of intrinsic value, and you sell it in 5 years when it reaches 100% of intrinsic value, you will earn a little under 20% per year (i.e. investment will double in 5 years).

(* I would say that Martin Whitman is mostly a classic value investor; however, a lot of his work involves tactics that resemble special situation investing such as restructurings or risk arbitrage).

I have to do some research to pin down the exact years but, roughly speaking, the second phase of Buffett's career spanned the 1970's, up to early 1990's. This is the phase I call Buffett Prime.

Although Warren Buffett had stronger percentage returns in phase I, I would say he created way more wealth in dollar terms, during phase II. The first phase made Warren Buffett a millionaire but the Buffett Prime stage is what put Buffett on the map. This is the phase when Warren Buffett bought large, dominant, companies like Washington Post, American Express, and Geico.

Buffett also started buying companies, not way-below intrinsic value, but close to intrinsic value. Instead of buying weak companies that are significantly undervalued, he started buying great companies at fair or slightly-below-fair-value prices. If you were able to get a great company for a fairly reasonable, albeit not extremely cheap, price, it also meant that you could hold on to them for a long period of time. Great companies have long lifespans and high return on equity so it didn't make sense to sell these golden geese just because they hit intrinsic value.

Since the Buffett-Prime style interests me, I could write a lot on this topic and may do so in the future. So I'm not going to go into a whole lot of detail here.

In my opinion, Warren Buffett's greatest period was his Buffett Prime period. There are very few investments in the history books that resemble some of his spectacular buys during this phase. His top investment of all time is Geico but his second-best may be Washington Post (or See's Candies too), whose chart is shown below: 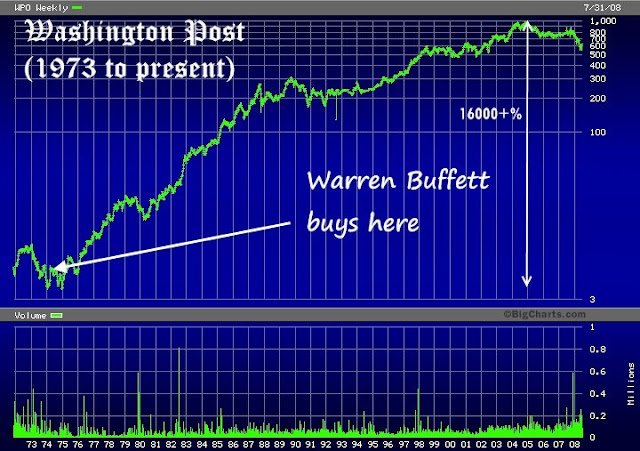 You could see the skill of Warren Buffett with this chart. The stock went up 16,000% in around 35 years (without even including dividends). Not just that, but it was a concentrated bet! Some people will end up with multi-baggers but they are never concentrated positions so their overall returns aren't spectacular. That isn't the case with Warren Buffett.

What most young investors, as well as newbies and the media, are familiar with is Warren Buffett's recent investment style. I term this period, stretching from the 90's to the present, Modern Buffett.

Warren Buffett started facing a problem in the 90's that only successful investors do. When you are successful, what happens is that your portfolio gets very large. Unlike many other activities in life, investment returns grow exponentially—that's why a continuous 1% gap makes a huge difference over the long run, and it's also why there is a huge gap between the successful and the rest—so you will end up with very large portfolios if you are successful. You see numerous hedge funds, mutual funds, and pension funds with large portfolios but that is largely due to investors adding capital. In the case of Buffett, his company grew organically without capital injections, and since it didn't return any money to shareholders through dividends or share buyback (except very recently), it grew very large.

On top of having an existing portfolio that is large, since Berkshire Hathaway and its stock investments are so good, they generate literally $1 billion every month that needs to be deployed (or returned to shareholders—historically Berkshire Hathaway didn't return money to shareholders).
When you become very large, your investment opportunities are few and far between. Warren Buffett's problems were:
Needless to say, the issues cited above have radically changed Warren Buffett over the last two decades. He has had to adjust his investment strategy and accept lower returns. His Modern Buffett investing resembles institutional investing rather than the pure stockpicking he used to do so well.

In particular, I think the Modern Buffett strategy is different from the prior two phases as follows:
I'm sure I'm missing a few other items but those are the thoughts that come to mind right now.

Overall, Modern Buffett is very different than Buffett Prime. Although Buffett is still a value investor and follows the same philosophy as always, the details are different. For instance, I honestly don't think the classic-investor-Buffett or the Buffett-Prime-Buffett would have purchased a capital-intensive low-return railroad like Burlington Northern Santa Fe. The former wouldn't have purchased BNSF because the price wasn't cheap; the latter would have skipped it because the underlying business characteristics aren't good.

The Modern Buffett's returns have deteriorated from the past: 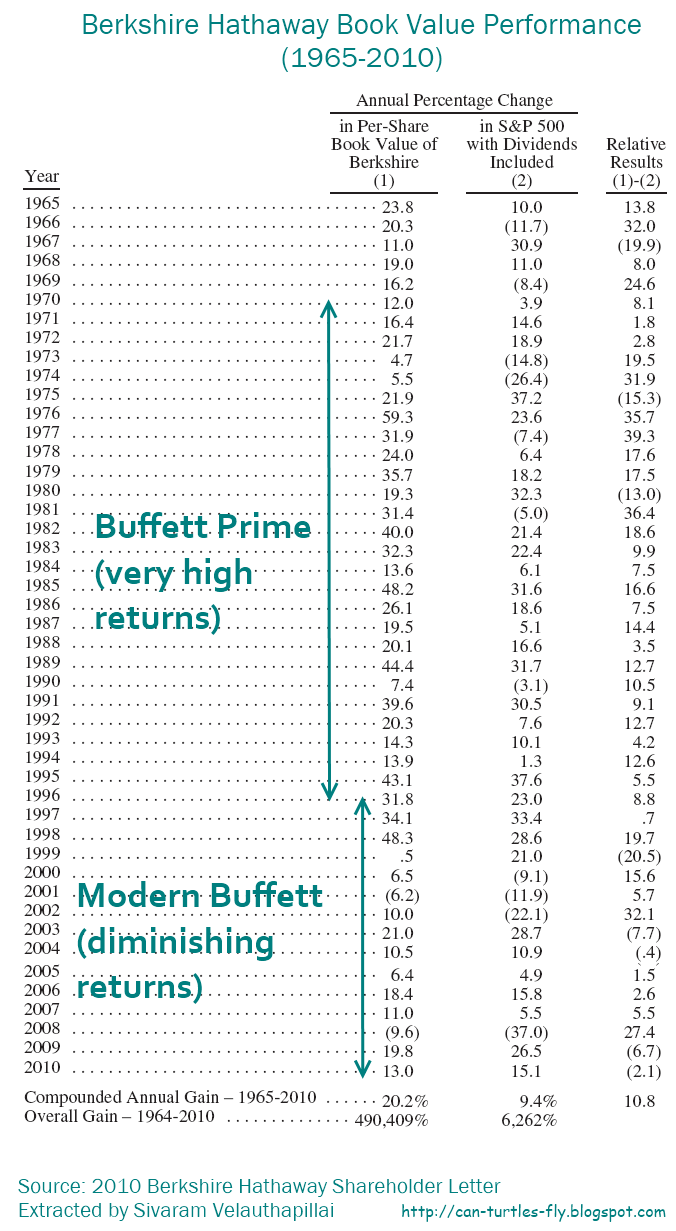 Although still impressive and better than what most will ever earn in their lives, Warren Buffett's returns, as measured by Berkshire Hathaway book value growth, hasn't been that great in the current phase.

As for examples of good Modern Buffett investors, I am not entirely sure. There aren't too many investors with the too-much-money problem. Many who appear to be successful and end up with a large capital base often blow up badly and never really get into the Modern Buffett phase (investors like Bill Miller and Bruce Berkowitz come to mind.)

My opinion, which others may dispute, is that Warren Buffett has gone through three phases. Each phase is significantly different, even though they all folow the value investing theory and framework. The classic value investing style is value-oriented; while the Buffett Prime style is growth-oriented; and the Modern Buffett style is institutional-investing-oriented.

If you are a newbie value investor, I would recommend that you choose the classic value investor style or the Buffett Prime style as your goal (assuming you are influenced by Buffett). I wouldn't recommend the Modern Buffett unless you had little time to pursue investing, can't handle too much risk and/or don't want to put in the effort.

Having said that, my impression is that the vast majority of so-called amateur value investors you see on message boards and the like are pursuing the Modern Buffett style. Another mistake I notice is that some amateurs pretend to be Buffett Prime investors but never do the due diligence or can ever explain the business model of the company.

I personally am aiming to be more of a Buffett Prime investor. I'm not a true value investor—I'm macro-oriented and that conflicts with value principles—but I hope to be as close to Buffett Prime as possible. This choice isn't because Buffett Prime is necessarily better; instead, it is just something that suits me. Some of you may be more suited to be classic value investors, especially if you like focusing on the balance sheet and thinking about asset values.


I haven't written many original articles this year—neither have I done any investing :(—but hope you enjoyed this blog post. Good luck with your investing!