America just held its 58th presidential election, which also coincides with the House and partial Senate and some State Governor elections. Although many were surprised by the results, it wasn't a huge surprise to me. Going into the election, polls consistently showed Hilary Clinton with a slim 3%-4% lead over Donald Trump. Clinton had a bigger 10%+ lead but it fell precipitously after the surprise big-news-turned-into-no-news FBI "bombshell" a week before the election (this clearly deflated a lot of Democrats and independents that were going to vote for Hilary). The fact that Hilary Clinton was already viewed negatively by many neutrals (for the corruption and Libya war and so on) didn't help matters. Results seem to suggest that Hilary's loss was due to supporters not turning up, rather than Trump attracting more. In the end, Clinton ends up with a majority of the votes by a slim margin (mostly due to high votes in populous states like California and New York) but doesn't garner enough electoral college votes which are influenced by states.

As clearly visible from the results below, Clinton lost some key states that Obama had secured. Trump won states such as Florida and Pennsylvania (large # of electoral votes) and others such as Wisconsin, Michigan and Ohio. I think the votes are representative of the struggles faced by many working class and middle class Americans. Many of these states represent the manufacturing heartland of America. For foreigners not familiar, when history books talk about manufacturing advances and developments over the last 100 years, many were in states such as Ohio (Wright brothers & flight), Michigan (Henry Ford & automobiles) and Pennsylvania (John D Rockefeller & oil). These industries have been declining for decades but may have reached the end of their "economic life" in the last few decades (obviously these industries are not going to end but the point is that they won't create jobs and won't increase wealth). Most of these states traditionally voted Democrat but clearly didn't feel that Clinton was going to help their cause. The rapid advances in technology also makes the situation worse for these displaced citizens so the Trump vote is probably a vote against technology as well.

Donald Trump is going to be wildly unpredictable and he is definitely discriminatory against certain segments of the population. It remains to be seen how this plays out. Those in Canada may remember Toronto mayor, Rob Ford, and Trump sort of reminds me of him: someone who is apparently very business savvy (but in reality is not), someone who says anything to get the public to support him (without thinking of long-term implications), and someone with questionable ethics.

The good thing about America is that it has a strong liberal/libertarian-leaning Constitution that is respected by citizens, and largely independent branches of the government (House, Senate, and Supreme Court). The US president has far less power than most people realize! In fact, the Canadian Prime Minister (equivalent to US President) or the British Prime Minister have way more power. Roughly speaking, the US President has less power over domestic activities but has tons of power over global affairs. So, when all is said and done, Trump will likely alter the shape of world politics more than what happens within USA.

The Republicans control the Senate and the House right now so the next few years of political decisions (which generally will impact the next 10 years or so) will be right-leaning. However, the House elections are held every 2 years, and part of the Senate is always up for election every 2 years so any crazy actions by the President usually results in control of Senate and House changing.

The Senate is going to an unusually important role right now because the upcoming Supreme Court judge is confirmed by them. Supreme Court judge rarely changes so this will have a multi-decade impact. On a different note, as the CBC News graphics I captured below point out, the House is the body that can impeach the president, not to mention control the budget. Trump has suggested huge capital expenditures, likely resulting in significant increase in budget deficits, so it'll be interesting to see what the House does. 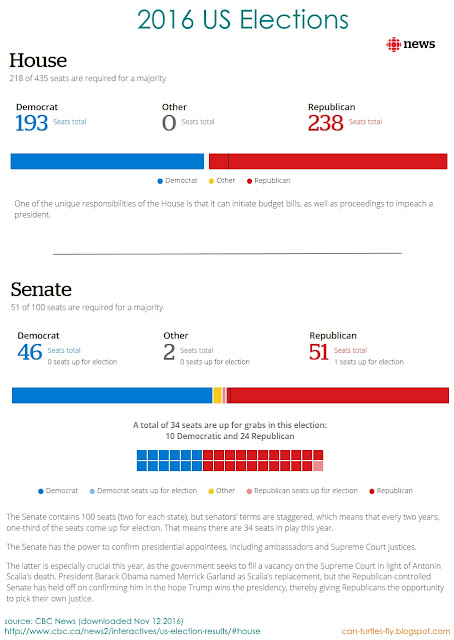