Berkshire Hathaway Bets on US Airlines

November 14, 2016 Berkshire Hathaway (BRK.A) cyclicals transportation Virgin America (VA)
Berkshire Hathaway just disclosed that it took stakes in major US airlines. Pretty sure it is not Warren Buffett, rather his co-CIOs, making these investments. Buffett joked that he wouldn't invest in airlines after his disastrous--disaster for him is exiting with a small gain ;)--bet on US Airways in the 90's and, although he can always change his mind, I doubt he did. Also, Buffett usually makes concentrated bets and this isn't one. What is interesting to me is that they seem to be making a sector or macro bet since they took stakes in multiple airlines--either that, or they are trying to obscure their true intention (the stock they want to own) but buying multiple ones.

It was only yesterday when I was commenting on Mohnish Pabri and his investment in Southwest Airlines (LUV). I wondered if the airline industry has changed from its money-losing ways. I wonder if the Berkshire investment managers are thinking the same thing. In an interview with CNBC Buffett confirmed that Berkshire also took a stake in Southwest Airlines (this happened after the end of the quarter which the 13F filing reflects). Really interesting to see Pabri take the same position.

One possibility is that the Berkshire CIOs are betting on airlines due to the decline in oil prices, which are a major cost for airlines. Although they may factor this in somewhat, I doubt this is the case since pure value investors don't generally speculate on future commodity prices.

In the Alaska Airlines-Virgin America merger presentation, the following slides were presented to illustrate how the American airline industry is supposed more profitable now. This document is likely biased (since it is there to sell the merger) but it is something to think about. Has the airline industry really changed? 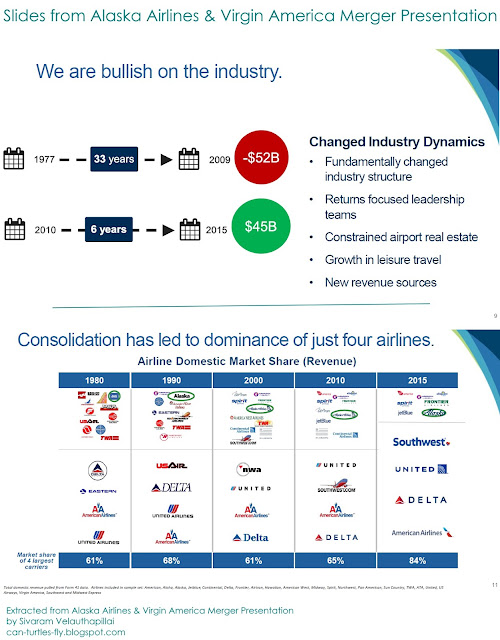 (source: "The Premier Airline for People on the West Coast," Alaska Airline and Virgin America. Flyingbettertogther.com)

The bottom slide clearly illustrates that the top 4 carriers have 84% of the market share, whereas as recently as 5 years ago, it was only 65%. Either economies of scale or pricing power could have led to improved operations for those top 4 carriers.

One thing going against an investment right now is that P/E ratios are very low right now. According to this Bloomberg article, TTM P/Es for the 4 largest US airlines are around 8, with American Airlines actually trading around 5. Cyclicals should generally be bought when P/Es are high (or infinite i.e. loss). I haven't done any research but one should be careful that they are not buying these companies near peak earnings, with high risk of markdowns during economic recessions--a recession and a stock market correction is way overdue and I think we will have one very soon.

Maybe it is worth investigating airlines as potential investments. This is certainly an industry that has historically been ignored by many amateur investors, for very good reasons.