November 21, 2016 hedge funds traders
Arguably the most successful hedge fund of all time is Renaissance Technologies' Medallion fund. I don't know much about hedge funds and don't have visibility into any of them, and furthermore, Renaissance is very secretive, so I'm just going by what others say. Since many people keep saying the same thing, I suspect Renaissance is indeed as good as it is.

Bloomberg Markets has a very good article on Renaissance Technologies, "Inside a Moneymaking Machine Like No Other." Given how the fund is secretive, there isn't much that is known but Katherine Burton, the primary author, does a good job with whatever is available. Even if you are not a quantitative investor, well worth a read for a markets history perspective.

Medallion is a quant fund and Renaissance employs numerous, highly educated and highly skilled, mathematicians and scientists. The founder of Medallion, Jim Simons, is a former mathematics professor.

Medallion's record is truly remarkable. It posts something like 50% per year on a $10 billion fund, including through bear markets. 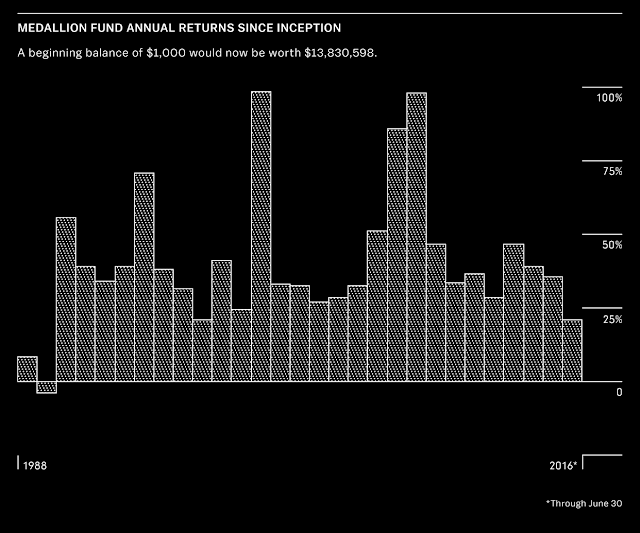 (source: "Inside a Moneymaking Machine Like No Other," Bloomberg Markets. Nov 21 2016)


Extremely skilled small investors may be able to generate 50% per year on a small portion of a few million but it is almost impossible for a $10 billion fund. Having said that, Renaissance doesn't retain its earnings so it prevents itself from getting bigger.

Of course, when you post very high returns, it can be fake/fraud/misleading-numbers or it can involve a lot of skill. Some will always argue it is fake or a fraud--just like how numerous people claim Warren Buffett is a fake and Berkshire Hathaway will go bankrupt when he isn't around--but I don't believe it is. I do think Renaissance is for real.


For outsiders, the mystery of mysteries is how Medallion has managed to pump out annualized returns of almost 80 percent a year, before fees. “Even after all these years they’ve managed to fend off copycats,” says Philippe Bonnefoy, a former Medallion investor who later co-founded Eleuthera Capital, a Switzerland-based quantitative macro firm. Competitors have identified some likely reasons for the fund’s success, though. Renaissance’s computers are some of the world’s most powerful, for one. Its employees have more—and better—data. They’ve found more signals on which to base their predictions and have better models for allocating capital. They also pay close attention to the cost of trades and to how their own trading moves the markets."

...
At their core, such models usually fall into one of two camps, trend-following or mean-reversion. Renaissance’s system had a foot in both.

...
How much money an employee has in Medallion depends on his overall contribution to the firm—and collaboration is key to getting a bigger piece of the pie. Employees are awarded an allocation of shares they can buy. In addition, a quarter of one’s pay is deferred and invested in Medallion, where it stays for four years. Employees must also pay fees of as much as “5 and 44.”

Simons determined, almost from the beginning, that the fund’s overall size can affect performance: Too much money destroys returns. Renaissance currently caps Medallion’s assets between $9 billion and $10 billion, about twice what it was a decade ago. Profits get distributed every six months.