November 17, 2016 Jeremy Grantham market valuation
I'm getting back into investing and one of my favourite big-picture thinkers is Jeremy Grantham of GMO. One of the things that makes this blog not much of a value investing blog--I don't necessarily consider myself a true value investor--is my incorporation of macro thinking. Grantham's latest 3Q 2016 letter is out and he devotes it to the high market valuation, which in my opinion is a bubble. He essentially suggests that valuations are high and will mean-revert, but doesn't think it will happen quickly as in most large bubbles. He thinks the most probable outcome is a drawn-out mean reversion.

I don't necessarily agree with Grantham on everything--for instance, I'm still not sold on his recent bullish call on (some) commodities and his thought that oil will hit $100 again (within a reasonable time period)--but he is an expert on bubbles and is one of the few that was bearish on the 2000 and 2008 bubbles (apparently also the 1989 Japanese bubble too but I wasn't investing back then ;) ). Although Grantham and his firm GMO isn't 100% perfect with their asset forecasts, they are mostly right than wrong. He is one of the few that I am aware of who treated timber as a major distinct asset class and was bullish long before anyone else (this wasn't an investable asset for small investors but it was valuable to pension funds and other large funds).

For macro-oriented investors, I highly recommend reading his 3Q 2016 piece, "Not with a Bang but a Whimper (and Other Stuff)," which is the 2nd letter in the document at GMO (main site here).

Click through for my full thoughts. Underlines are by the author but as is usually the case, bolds and square brackets are by me. I don't like quoting so much but I'm going to do it here since Grantham writes so well and his thoughts are very valuable for future reference.

Well, the US market today is not a classic bubble, not even close. The market is unlikely to go “bang” in the way those bubbles did. It is far more likely that the mean reversion will be slow and incomplete. The consequences are dismal for investors: we are likely to limp into the setting sun with very low returns. For bubble historians, though, it is heartbreaking for there will be no histrionics, no chance of being a real hero. Not this time.

Hidden by the great bubbles of 2000 and 2007, another, much slower-burning but perhaps even more powerful force, has been exerting itself: a 35-year downward move in rates (see Exhibit 1), which, with persistent help from the Fed over the last 20 years and a shift in the global economy, has led to a general drop in the discount rate applied to almost all assets. They now all return 2-2.5% less than they did in the 1955 to 1995 era (or, as far as we can tell from incomplete data, from 1900 to 1995).

Grantham generally considers a major bubble to be about 2 standard deviations from the norm. He identifies the key characteristics needed for bubbles:


1. Classic investment bubbles require abnormally favorable fundamentals in areas such as productivity, technology, employment, and capacity utilization. They usually require a favorable geo-political environment as well. But these very favorable factors alone are not enough.

2. Investment bubbles also require investor euphoria. This euphoria is typically represented by a willingness to extrapolate the abnormally favorable fundamental conditions into the distant future

3. The euphoric phases of these epic bull markets have tended to rise at an accelerating rate in the final two to three years and to fall even faster. Exhibit 2 shows four of my all-time favorites. True euphoric bubbles have no sound economic underpinning and so are particularly vulnerable to sudden bursting when some unexpected bad news occurs or when selling just starts… “comes in from the country” as they said in 1929. 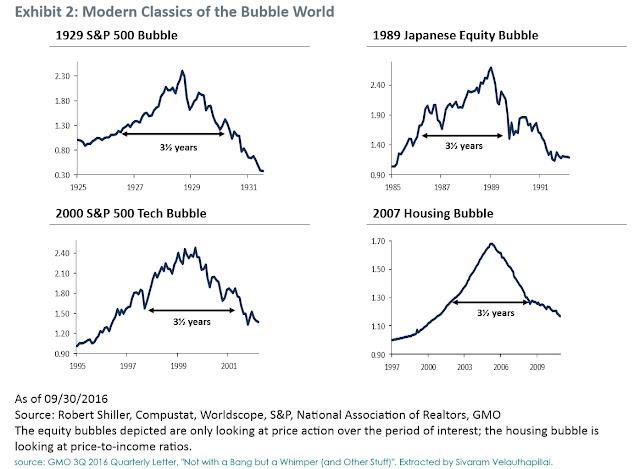 5. What did these four bubbles have in common? Lots of euphoria and unbelievable things that were widely believed: Yes, the land under the Emperor’s Palace really did equal the real estate value of California. The Japanese market was cheap at 65x said the hit squad from Solomon Bros. Their work proved that with their low bond rates, the P/E should have been 100. The US tech stocks were 65x. Internet stocks sold at many multiples of sales despite a collective loss and Greenspan (hiss) explained how the Internet would usher in a new golden age of growth, not the boom and bust of productivity that we actually experienced. And most institutional investment committees believed it or half believed it! And US house prices, said Bernanke in 2007, “had never declined,” meaning they never would, and everyone believed him. Indeed, the broad public during these four events, two in Japan and two in the US, appeared to believe most or all of it. As did the economic and financial establishments, especially for the two US bubbles. Certainly only mavericks spoke against them.

The Japanese bubble is likely the biggest in human history by any measure; just think about how a small plot of land, the Emperor's Palace, was valued more than all the real estate in California! Anyway, as Grantham explains later on, the reason the current state is not a classic bubble is because the investor euphoria is largely missing. Even though valuations are high, without the investor behavior typical of bubbles, a quick crash seems unlikely. (Of course, things could change if some "event" unfolds.) Grantham also goes to point out that recent bubbles have also coincided with a credit boom/bubble. Presently that doesn't appear to be the case. I think there is likely a big credit bubble in China but it doesn't seem to be the case in America or Europe. However, the present still resembles a bubble because of valuations:


11. The current market therefore is closer to an anti-bubble than a bubble. In every sense, that is, except one: Traditional measures of value score this market as extremely overpriced by historical standards.

So, the investor behavior doesn't meet the bubble standard but the valuations do imply one. Grantham believes this situation is caused by abnormally low, distorted, interest rates, which he blames is largely due to central banks (he mentions several other potential causes but believes central bank actions the primary cause). His analysis seems to imply that real returns are 2% lower across the board.

Grantham thinks it is more probably that valuations will mean-revert 2/3 of the way than all the way (as in most bubbles) and suggests that the process could be drawn out.

Currently GMO forecasts 7-yr returns as follows (refer to the first report by Ben Inker in the same document linked above). Note that these are real returns so you should add maybe 2-3% inflation to arrive at nominal returns: 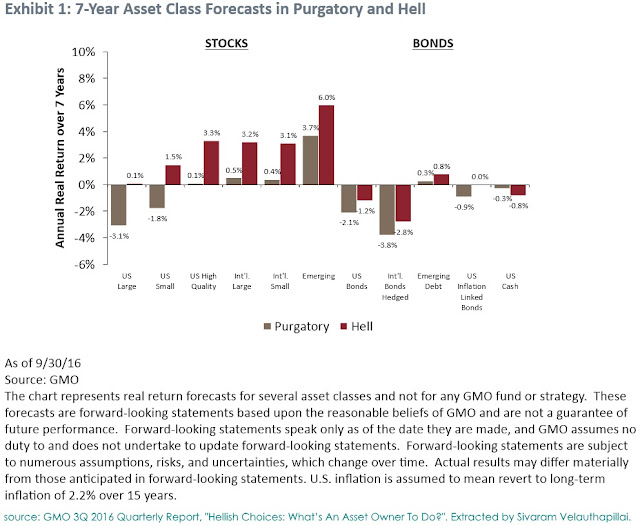 For just the S&P 500, Grantham expects returns to be as follows if it is drawn out: 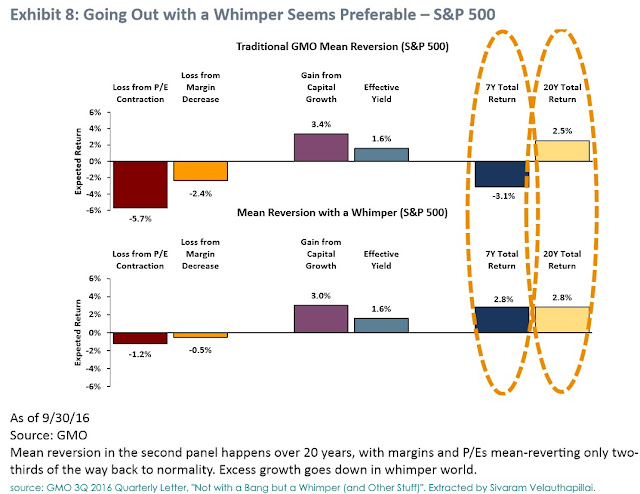 This lower-return scenario is not the end of the world for small investors. For us, it'll just mean we won't get as richer as in the past. We will probably earn less than anyone investing over the last century (except maybe those who were investing in the 60's and 70's when there was a severe decade-long bear market; I'm also ignoring the case of someone investing 100% of their assets at a point in time like the 1929 or 2000 peak).

The serious impact of low returns will be on pension funds, insurance companies, endowments, and the like. These investors have obligations and promises based on normal returns (say 10% for stocks) and they won't be able to meet those obligations. If bonds enter a bear market, which seems certain given their valuation, they will get hit by that as well and can't really "hide" in many places.

Another big element that is driving high valuations is high corporate profit margins, which Grantham says will be covered in a future report. This is a very complicated topic and I don't know how it is going to play out.

The problem with high valuations is that everyone, even conservative investors, end up reaching for yield or investing in weak assets. It's really hard to avoid it.