Netflix (NFLX) has been in the news lately, and given its steep fall in its stock price, I thought I would take a look at it. This is an early look, focused on its business model.

For those not familiar, Netflix is a US-based distributor of television and film content. It became the dominant DVD-by-mail rental service in the US, and has been transitioning into the online streaming business.

Netflix used to be a "growth story" over the last few years, and favoured by growth and momentum investors. It rose more than 900% within just the last 3 years but has had a spectacular fall this year: 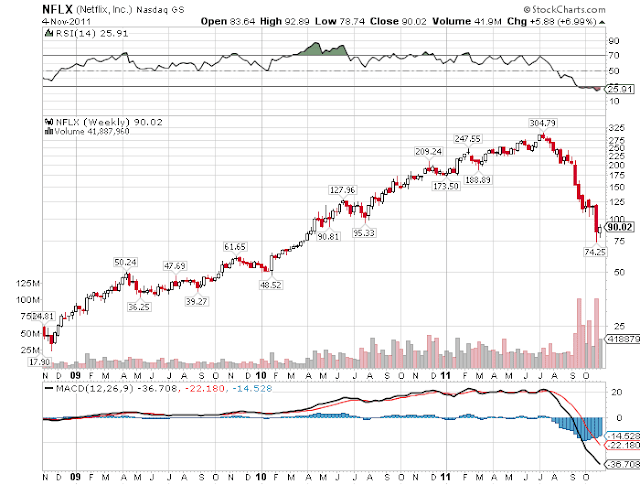 As a contrarian, I became interested given its steep fall. The stock is off given poor results and some strategic mistakes by management.

The stock still doesn't appear cheap (trailing P/E around 20; forward P/E around 63; P/Sales close to 1.7; P/Book of 12.5). Market cap is around $4.7 billion (enterprise value around $4.6B) and I think the company is probably attractive at $3 billion (say a stock price around $55, assuming share count stays the same).

Anyone doing valuation should be really careful because Netflix is switching from a mail-order DVD business to a streaming business, which will result in signficantly different business characteristics. For instance, profit margins on streaming will be significantly lower—with DVD you buy once and rent as many times as you want; with streaming, the price paid for conent will likely factor in volume—and the competitive marketplace is radically different.

Also, Netflix is expanding rapidly into Canada, Latin America, and UK & Ireland. Consequently, figuring out owner earnings based on existing numbers is very tricky. All the earnings and FCF numbers will be depressed and the investor needs to separate out sustaining capex from growth capex.

One negative against Netflix is that their capital allocation is questionable. Management and the board bought back stock at ridiculously overvalued prices in the last few years and they probably destroyed several hundread million dollars of shareholder wealth by doing that. They also issued debt to buy back shares and this has backfired given the fall in share prices. (To be fair, if you look at a longer period spanning 4 or 5 years, they did buyback shares are much lower prices than now. But I wonder how much of this is pure luck when the company was small versus skilled capital allocation.)

Who Does Netflix Compete Against?

Before investing in anything, one should figure out the competitive environment. Because online streaming of film and television content is a new delivery mechanism, the competitive environment is more complicated than it seems. There are many new entrants using all sorts of models, ranging from pay-per-view to subscription to advertising-supported free viewing. No one really knows which model is going work, or who is actually competing against whom.

I am going to spend some time quoting Netflix's views at length. I think they provide an insight into the marketplace. The following quote from the Q3'11 Top Investor Questions describes the competitive landscape (as usual any bolded text emphasis is by me):

Our largest competitor over time is likely to be an improved MVPD service offering more Internet video on-demand, and thus reducing the number of people who will be attracted by a supplementary service like Netflix. Our task is to consistently improve the quality of our service and stay two steps ahead, so that consumers will continue to enjoy Netflix

More fundamentally, our primary competitive advantage is our large and growing subscriber base which gives us tremendous operating efficiencies and, which we believe, drives the following virtuous cycles:

It appears that Netflix's strategy is to become the largest player so that a larger content library can be funded, which will create a synergistic cycle. I get the feeling that if Netflix is unable to grow, it will run into serious problems. It seems to be staking its business model on first-mover advantage.

The Threat from MVPD Providers

In the Q3 Investor Letter, Netflix elaborates on the threat from MVPD (I'm having problems quoting from the PDF so I thought I would paste in a screencap; click on image if it's not clear): 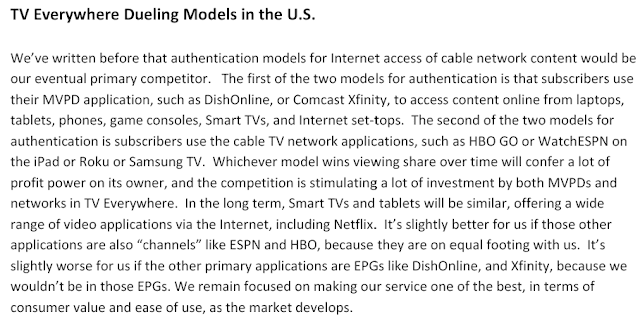 The question for investors is whether Netflix can compete against these MVPD providers. For example, if a cable television company offers through the Internet its programs to its subscribers for free or for a subscription fee, can Netflix ever compete?

Some bears argue that Netflix has no chance once some of these MVPD providers establish themselves. I don't share their view. The advantage of something like Netflix is that it can offer a one-stop-shop for customers. Netflix is content-neutral and as long as it offers a large enough content library, it will be more atractive, I think. In contrast, a cable company (or whomever) will have limited, specific, content. Netflix is more like a "news portal" rather than a newspaper.

In the long run, I believe one major threat to Netflix is the potential for bandwidth throttling by ISPs (Internet Service Providers) and/or Internet pricing based usage. Netflix has some options to tackle this threat, including increased compression of data (potentially reducing quality), but it's not clear how much this impacts customer perception.

In the Q1 2011 Investor Letter, Netflix described the bandwidth cap issue it encountered in Canada:

Below is a recent screen shot of Google’s home page in Canada [not shown here]. You can see that Rogers, a leading ISP and MVPD in Canada, intercepted the Google page, and inserted the Rogers’ data cap warning screen at its top. It stands to reason that Canadian consumers subjected to such data caps – and outrageously high overage charges of $1 or more per gigabyte – will have a less positive view of Internet use and online video in particular.

As a side note, data caps are actually a very poor way to manage demand and limit Internet congestion. All of the costs of supplying residential broadband are for supporting the peak loads, typically Sunday nights for residential customers. Bandwidth consumed off-peak is completely free; it literally has no marginal costs. If ISPs really wanted to limit their costs and congestion, they would limit speeds at peak times. But if their goal is instead to increase revenue, then making consumers pay $1 or more per gigabyte is an excellent strategy.

In the U.S., AT&T recently imposed caps of 250 gigabytes on U-verse fiber Internet subscribers, and 150 gigabytes on DSL subscribers, with a charge of approximately 20c per gigabyte over those limits. We’ll study how this affects consumer attitudes about Internet video, and take appropriate steps if needed. Comcast has had 250 gigabytes caps for years without overage charges and that hasn’t been a problem for Comcast customers or for us.

In the long run, data caps and bandwidth throttling can impact the profitability of online streaming of content. Right now, at least in Canada, you are seeing the battle between the ISPs (like Rogers) and the content distributors (like Netflix). It's not clear who will profit the most from increased Internet usage.

How Will Netflix Differentiate Itself?

Some have wondered how Netflix will differentiate itself from the competitors. I believe differentiation is not a concern in the streaming business if Netflix is able to have a sufficiently large content library. You are going to end up with differentiated products in the television/film streaming business because it inherently involves exclusive content distribution. Management thoughts on the differences between the radio and video business explains this. The following graphic is from the Q3 2011 Investor letter (click on image for larger one): 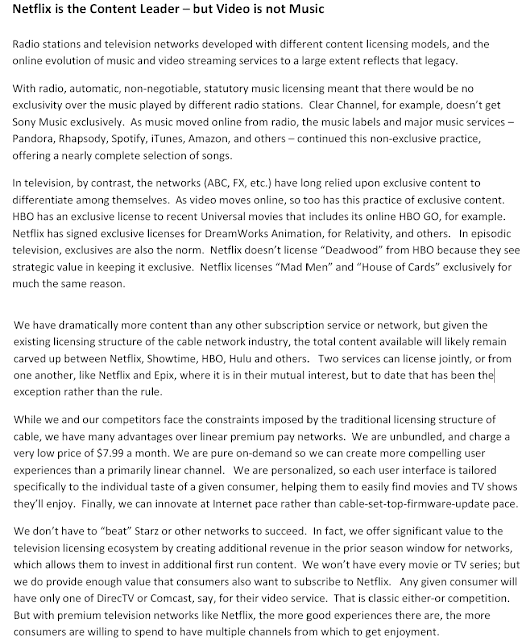 I wasn't familiar with the media industry but I never knew that radio involved statutory, non-negotiable, licensing. Thinking about it, it seems so obvious—all radio stations can play the same songs—but it is 180 degrees from the television and movie business, where exclusive deals are the norm. If online streaming follows the path of television, which it appears to, then content distributors will automatically be differentiated.

Some have misunderstood the Netflix's business and assumed that every company that enters the market will provide the exact same service but this appears to be incorrect. As with television channels over the last 50 years, there is going to be quite a bit of differentiation.

The key, which is what Netflix is attempting to do, is to sign exclusive deals and carry as much content as possible. Content costs are rising but if subscribers increase as well, this can create a moat for Netflix.

This post isn't very structured, on purpose; I wanted to look at the business Netflix is engaged in and tackle some of the views put forth by some. The main points I gathered from looking at Netflix's business model are:
The stock isn't cheap but if it falls a bit more, I'll take a look at valuation.