November 13, 2011 contrarian energy Jim Chanos
Many of you probably already saw Jim Chanos' presentation from Value Investing Congress in October but I just got around to checking it out. Contrarians should definitely check out the presentation embedded below (Thanks to Jacob Wolinsky for bringing this to my attention.)

I thought I would pick off some key concepts put forth by Jim Chanos. The presentation isn't long but it contains some nuggets so read on if you are interested in my thoughts.

Chanos starts off by listing some classic scenarios that portend to stock price declines: 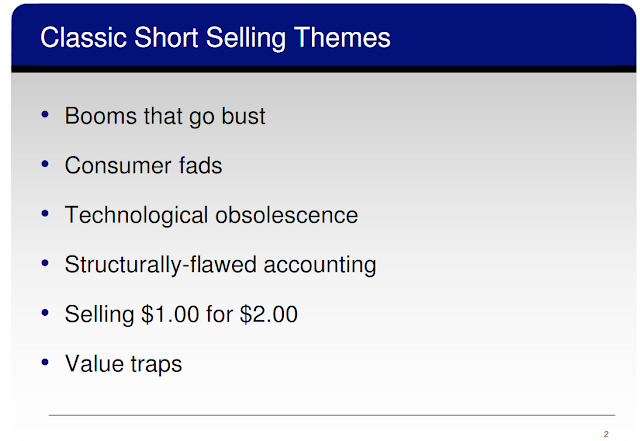 Value-investing-oriented investors are perhaps most vulnerable to technological obsolescence (or business model obsolescence) and value traps. If you are focused on valuation, it is a bit easier to avoid the others such as boom-to-bust scenarios or sexy fads.

Value traps are big problem for anyone that invests in "cheap" or distressed assets and Chanos highlights some characteristics that one should look out for: 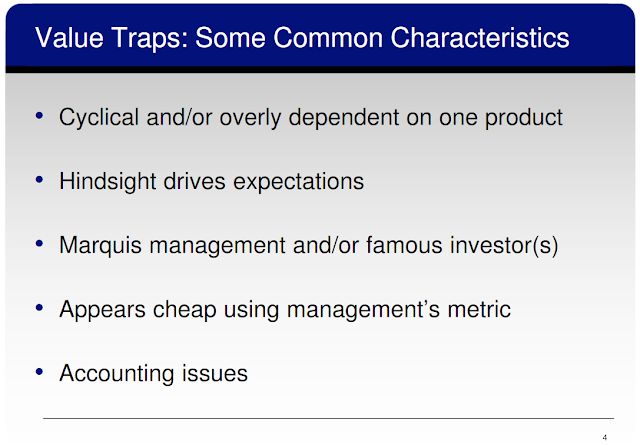 If you are a contrarian-type investor, it is always a good idea to see what the short-sellers are saying. I'm one that likes to always look at dissenting views and, often, you can learn quite a lot from short-sellers. They are not always right and some of them manipulate the media but they often do the homework. In this presentation, Jim Chanos lays out his bearish thesis in the following areas: 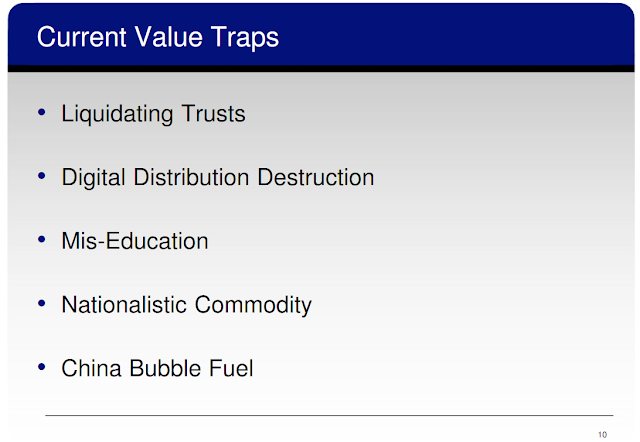 We have heared of most of these and I am not going to go into them—although the presentation does list some specific stocks that may not have been disclosed in the past—but the first one, "liquidating trusts," is something that I have been intrigued since Chanos brought it up an year and a half ago. By "liquidating trusts," Chanos is referring to oil & gas supermajors: 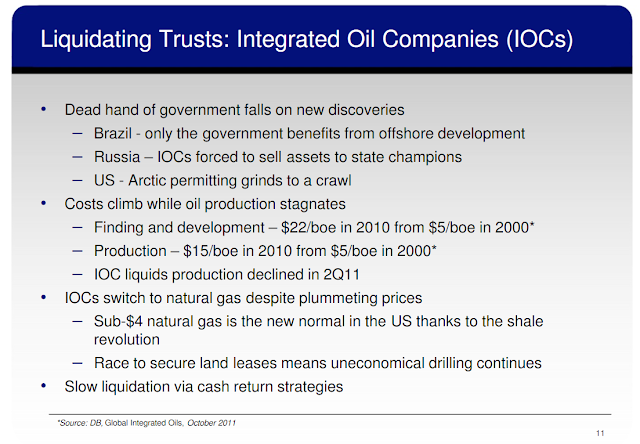 Chanos' suggestion is very provocative and I'm sure everyone in the oil patch would disagree with him. Nevertheless, he does make some interesting points. In particular, F&D costs have skyrocketed (mostly because it is harder to locate available oil resources) and production costs have risen as well. Chanos pegs a total cost of around $37/bbl for F&D and E&P, versus around $10/bbl back in 2000. I don't follow the oil market much anymore but, for reference, I believe total costs are around $50/bbl for Canada's oil sands.

The glut of natgas from shale gas is also a concern although it depends on if that can be exported or used to power natural-gas-powered power plants (especially as coal plants are retired and new electricity demand, potentially from electric vehicles and the like, drive demand).

When he originally brought it up, I didn't feel he was bearish on ExxonMobil (XOM) but I was wrong. Chanos comes out and lays out his reasons for his bearish call on ExxonMobil: 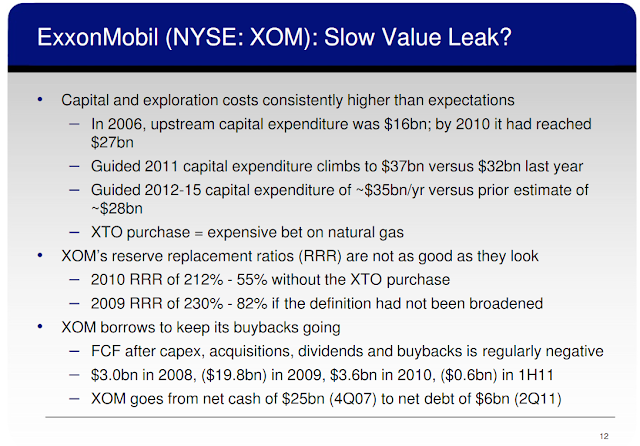 When Chanos first disclosed his bearishness on oil&gas supermajors—I believe it was a Bloomberg television interview—I was trying to get more details on his call. I wasn't unable to, but, finally, I get some details on why he is bearish.

Chanos is basically arguing that ExxonMobil's costs are rising while its reserve replacement is poor (if you ignore the reserves added through takeovers). I am not sure the situation is as bad as Chanos implies. I have to look into this deeply—I'm not going to, since I don't have any interest in this—but the reason cash flow may look bad is because ExxonMobil is making investments for the long-run. The real question to me is whether those investments will be profitable down the road. That, in my eyes, depends largely on the oil price. I'm not sure about oil at $100 but if it drops to around $60 for the long run, I think some of those investments may turn out to be expensive, or downright uneconomic.

So far, the stock market says Chanos is wrong: 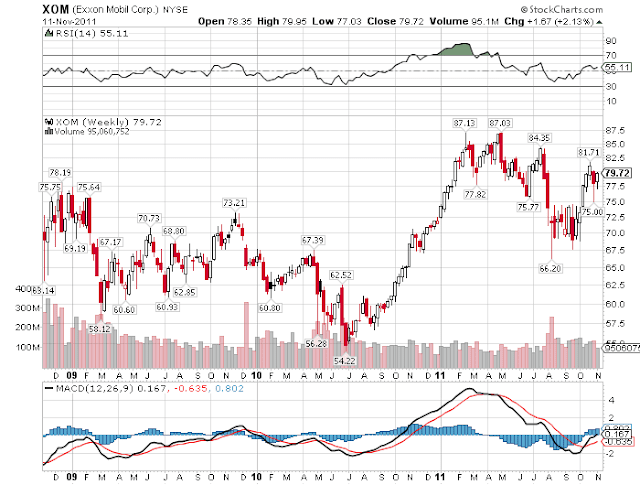 Who knows when Chanos initiated his position and whether he actually shorted the stock or is using some derivatives but whatever the case may be, the stock is up around 33% from the middle of last year. I suspect Chanos is down from his initial position on ExxonMobil.

I'm curious to see what comes of all this. For now, given my bearish stance on commodities, I'm avoiding any exposure and just watching.