How good was Bill Miller?

November 21, 2011 Bill Miller
In my prior post on Bill Miller, a reader, McMath, posted a link to a chart at Economicpicdata that appears to make Bill Miller look worse than he actually was. The author at that blog picked some time around 1986 as the starting point and I feel that it misrepresents Miller's career.

Since I'm probably the only remaining fan of Bill Miller ;), I thought I would post what I think is Bill Miller's lifetime performance. I am reproducing below, a Morningstar chart for the Value Trust mutual fund (LMVTX) since 1982. Morningstar is very good with their mutual fund data (unlike, say, Yahoo! Finance) and typically computes real returns properly.

I believe Bill Miller started managing the fund in 1982 but it is not clear how much of the stockpicking was solely up to him in the early days. I really don't know and am ascribing all the performance to Miller. Furthermore, I am not sure if the chart below includes expenses (MER). I suspect it does, since Morningstar is very good at including the proper elements, but I am not entirely sure. (If anyone has more correct data, please provide it so that I can use that.)

Finally, do note that the returns shown below are not necessarily the same as what a fund investor would have earned. Depending on how much you invest and at what time period, it will impact the actual return.

In any case, Bill Miller's lifetime performance, if you invested $10k in 1982 is as follows (do note that this is a log chart): 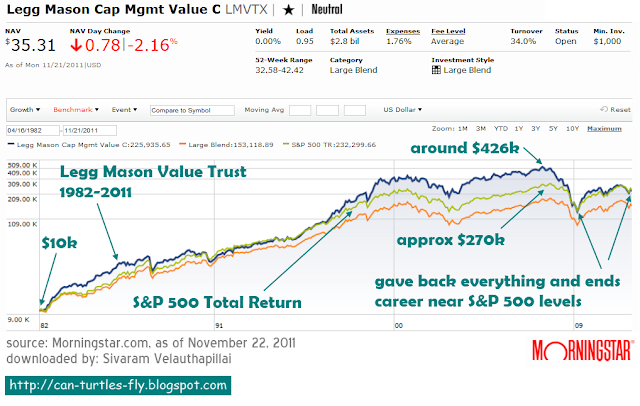 Miller significantly outperformed the S&P 500 until his catastrophic bets during the financial crisis. Near the peak, roughly around 2006, $10k invested in S&P 500 in 1982 would have a value of $270k. In contrast, Value Trust had a worth of around $426k.

So, near the widest gap, which was roughly when Miller's 15 year streak of outperforming the S&P 500 ended, you would have earned almost 1.6x what the market (S&P 500) would have produced.

Unfortunately for Miller, his disastrous bets on financials—many of the key bets went bankrupt or were heavily diluted by government capital injections down to zero—gave back all his outperformance. He ends his career barely beating the S&P 500.

Because of his blunder in 2008-2009, he will go down in history as just another mutual fund investor. But if he hadn't made such a catastrophic error, I honestly think he would have been at the lower-tier of the 'Investing Hall of Fame,' perhaps similar to John Neff or Peter Lynch. I personally treat him as a skilled investor.

If you strike out in the important game, you go home. Simple as that. Unfortunately, he struck out at the most important game in the last 40 years.