When will China's GDP surpass USA's?

When Goldman Sachs made its first forecasts for the BRIC economies (Brazil, Russia, India and China) in 2003, it predicted that China would overtake America in 2041. Now it says 2027. In November Standard Chartered forecast that it will happen by 2020. This partly reflects the impact of the financial crisis. In the third quarter of 2010 America’s real GDP was still below its level in December 2007; China’s GDP grew by 28% over the same period.

If real GDP in China and America continued to grow at the same annual average pace as over the past ten years (10.5% and 1.7% respectively) and nothing else changed, China’s GDP would overtake America’s in 2022. But crude extrapolation of the past is a poor predictor of the future: recall the forecasts in the mid-1980s that Japan was set to become the world’s largest economy. China’s growth rate is bound to slow in coming years as its working-age population starts to shrink and productivity growth declines.

The above, from an interesting article in The Economist, speculates about when China's GDP may surpass USA's GDP. The Economist continues,


Our best guess is that annual real GDP growth over the next decade averages 7.75% in China and 2.5% in America, inflation rates average 4% and 1.5%, and the yuan appreciates by 3% a year. If so, then China would overtake America in 2019 (see chart).

Two thousand and nineteen is not very far from now. It would be a spectacle and an historic point in world history when that happens, if the assumptions hold true.
There is an interactive chart that accompanies the article, where you can enter your economic assumptions, and it will produce a chart. With my assumptions, China overtakes USA in 2026 and the chart looks like this: 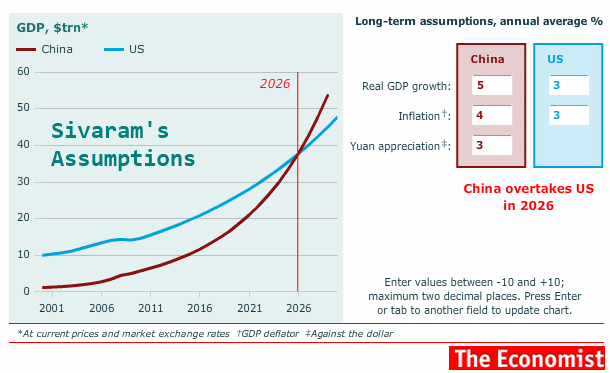 I am assuming USA's real GDP growth is 3% with an inflation of 3%. Both of these are the very-long-term averges USA has produced in the recent past and I think USA will grow at those rates unless something terrible happens in America.

For China, I think it will grow far less than most imagine (5% real GDP growth) and, as is normal for developing countries, inflation will be slightly higher than developed countries (I'm assuming 4% inflation). This means Chinese nominal GDP growth of 9% versus around 14% now (China's growth in the past few decades has been approximately 10% real GDP with around 4% inflation). I don't have a strong opinion on the currency and am assuming it will strengthen at 3% per year in the long run. Similar to USA, I am assuming something horrible doesn't derail China.

If you want to play around with the assumptions, you can do so in the interactive chart below:

On a related note, if the status quo is maintained, China will encounter poor demographic trends—aging population and declining population, partly due to unequal male-female gender distribution—in 40 or 50 years. Such a scenario will make it difficult for China to outperform in the near-distant future. However, I don't think the status quo will be maintained and China likely won't face the poor demographics as many demographers, economists, policymakers, investors, and businesspeople believe. Once China dismantles the so-called one-child policy—it has been quietly doing this in the background already—the demographics problem should be less problematic than it seems.... The biggest risk in China is their totalitarian government — it can implode any minute and without warning. The longer the authorities kick the can down the road and avoid democratizing their institutions, the riskier everything gets.