Is inflation imminent? I doubt it...

December 14, 2010 bonds and credit instruments deflation economics
It looks like my post on Keynes from a few days ago got picked up by FT Alphaville, setting a record for page hits on my blog... anyway...

Those following the markets closely may have noticed that US government bond yields have ticked up, while the US$ has sold off (the Canadian dollar index, which includes the US$ as a major component, has been somewhat flat and this leads me to believe the US$ isn't as weak as it appears). So the question is, are we seeing the beginning of the inflation that inflationists have bet on for years? Let's take a look.

Let's take a look at the US government bond yields, which have risen quite a bit in the last few months. But how do they look on a longer time frame?

The following chart is the 10 years bond yield, courtesy bigcharts.com: 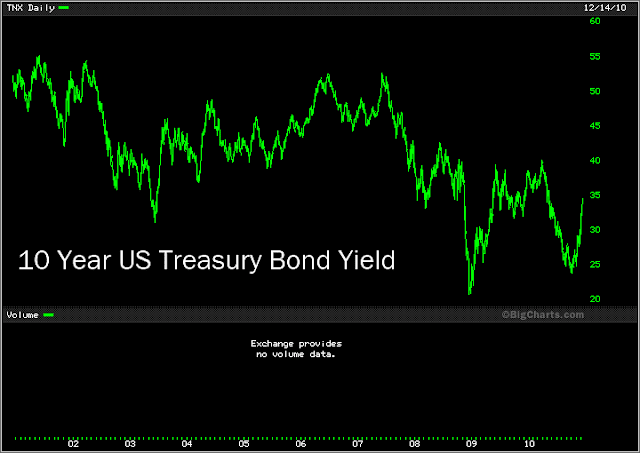 Right now, the yield is around 3.5% for the 10 year bond. Although the yield rally has been very strong, we are just back to where we were at the start of the year. The picture doesn't look too ominous from an inflation point of view.

How about the 30 year bond? 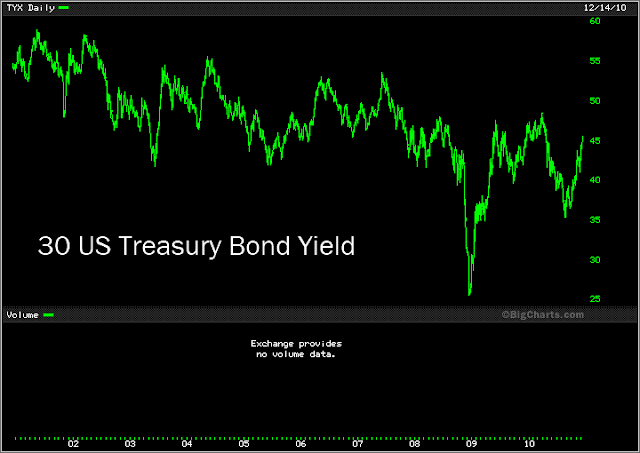 The 30 year bond is yielding a little over 4.5%. This puts it a little below the average over the last 10 years. Although some have started suggesting that yields have started a new, rising, trend, I remain skeptical about the inflation argument.

Let's look at the CRB index, which is a good proxy for commodity prices: 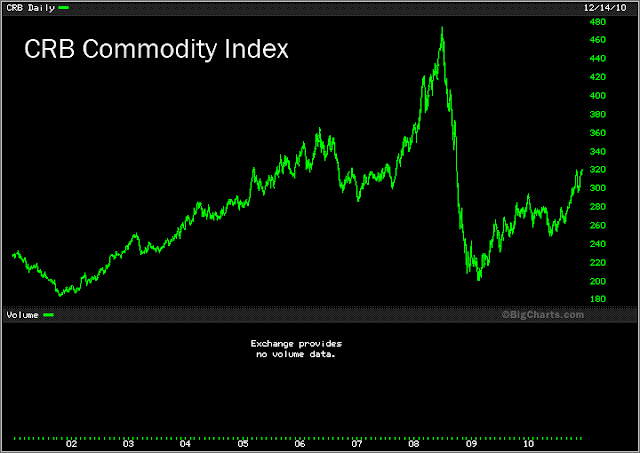 The CRB index is back to where it was in the 2005-2007 period. It's still way off from the 2008 peak (this is one reason I get the feeling that commodities may have entered a secular bear market). Does this picture indicate looming inflation? It's difficult to say. Since we didn't have high inflation even when the index was at higher values (back in 2007-2008), I doubt inflation is imminent.

Inflationists pay a lot of attention to commodity prices and currency values but deflationists tend to value other metrics. In particular, one of the big arguments by deflationists is that, even if central banks print money, it may not get out into the economy. If a central bank printed $1 million and gave it to you, and you buried it into the ground, there would be no inflationary impact on the economy. In fact, it would be as if nothing ever happened.

What is happening now, at least in America, is that banks are hoarding cash. The money created by the FedRes just isn't going into the economy (this is not the case in countries like China but that's an entirely different matter). Although someone with only a post-1940's understanding of history may be puzzled at what is happening, the present behaviour is quite normal. The same thing happened in the 1930's, when bank reserves skyrocketed.

If you believe inflation is caused by total credit in the system—not just price changes—the big metric to watch right now is excess bank reserves. I'm not an economist and don't entirely understand the details of it, but the following chart is an indicator of excess reserves held at US banks (I'm not sure if this is just the banks in the Federal Reserve system, or all banks, but details don't matter for our purposes.) 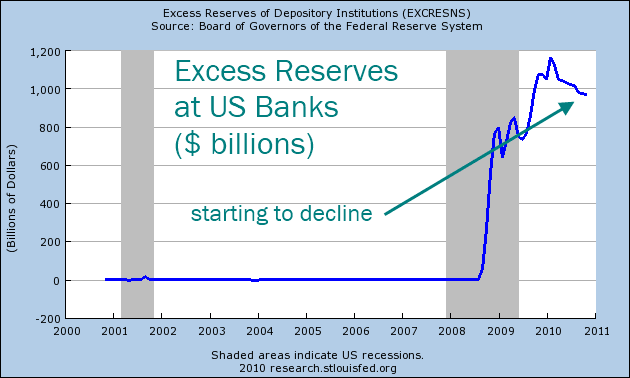 The chart above comes from the excellent St. Louis Federal Reserve website (FRED). It shows, in billions of dollars, the excess reserves held by American banks.

For those not familiar with what happened in the last few years, here's a quick recap. The FedRes printed a lot of money and injected into the banks. As to be expected during deflationary busts, when banks are deleveraing, as well as trying to sort out the good quality borrowers from the rest, the banks didn't loan out the money. The money just sat as excess reserves and you see this in the chart as the massive jump in the 2008-2009 period. The hyperinflation predicted by many inflationists didn't materialize because the money didn't enter the system—in some sense, the money wasn't really created.

Starting in 2010, you do see the reserves declining. The excess reserves may be declining because banks have increased lending—this means money enters the economy—or it may also be because banks are paying back the FedRes.

If the excess reserves are being lent out into the economy, it will definitely result in very high inflation (unless equivalent amount of cash and/or credit is destroyed). For instance, the excess reserves is roughly around $1 trillion right now, and if that line drops to zero tomorrow because banks are lending out the excess reserves, $1 trillion would enter the economy (I'm not an economist and don't really understand this but I think the impact will actually be much higher due to multiplier effect, wealth effect, and various other factors).

Although the excess reserves are declining, it's too early to say if inflation is likely (i.e. money printed by the FedRes two years ago will enter the economy).

Another way of looking at excess reserves is to look at percentage change. The following chart plots the same data above as compounded rate of change: 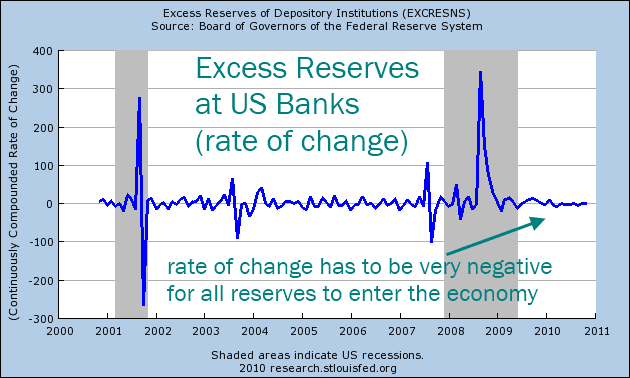 If we look at the rate of change, I don't see anything that implies inflation is likely. The rate of change, which used to be massively positive in 2008, when FedRes injected huge amounts into the banks, has basically dropped down to zero. My guess is that the rate of change has to be a large negative number for the excess reserves to enter the economy quickly. If that doesn't happen, I highly doubt there will be inflation.

Based on a quick look at various indicators, I doubt inflation is around the corner. Bond yields have risen, but they are just back to where they were early this year. The CRB index is up but nowhere near what it was in 2008. A key determinant of inflation will be all the money that was printed and there is nothing to indicate that it is entering the economy.

The only valid signal that indicates inflation is gold. I didn't cover it here because I don't see anything unusual in gold price movements in the last year, but the fact that it has been rising continuously may indicate something. However, as I have mentioned in the past, gold is not correlated with price inflation, or possibly any inflation at all, so it isn't a good asset to look at.