December 23, 2010 Dynegy (DYN) energy GenOn (GEN)
I'm bearish on commodities but the only commodity that I would consider is natural gas. Compared to the rest of the commodity complex, natural gas remains quite contrarian, with prices hovering near 7-year lows. Unfortunately for the bulls, nothing much has changed since I last wrote about it, about an year ago. The price is roughly what it was when I wrote that article: 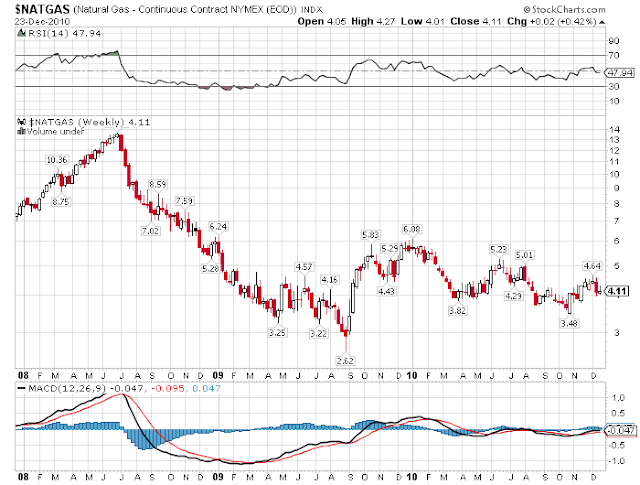 Encana, a bellwether—I believe the largest natgas E&P in North America—is just a tad bit above when I wrote my prior post: 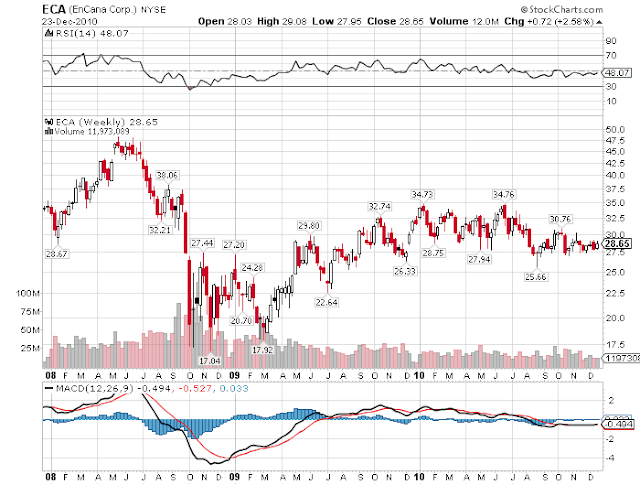 Note that just because prices are low doesn't mean it is a good contrarian opportunity. There is a good reason why natgas is trading where it is.

Unlike oil, natgas is localized and there has been massive production from unconventional sources (particularly shale gas). In fact, Big Oil has become gassy over the last few years—not sure if this is good or bad for the industry??—and it isn't shy to spend money on drilling for more gas. Believe it or not, many are drilling even if profitability is questionable. Apparently, as this Reuters article (picked up by the National Post) makes clear, the excessive drilling is due to drill-it-or-lose-it concessions signed by the E&Ps:

But the shale pioneers have become victims of their own success. The magnitude of the reserves unearthed by the likes of Chesapeake Energy and XTO, now a division of Exxon Mobil, has sent prices plunging -- even as an economic revival has perked up demand. Gas now trades at little more than a third the level of June 2008.

Yet instead of cutting back, the energy industry has intensified drilling. The number of rigs drilling shale has doubled since 2007 to over 500, according to Houston merchant bank Tudor, Pickering, Holt.

Part of the explanation for this perverse behaviour is the structure of leases for the land. Drill-it-or-lose-it leases often compel firms to pump gas or kiss goodbye to their claims -- which can cost up to $30,000 an acre in prime parts of Louisiana or Texas. Involuntary drilling of this kind will only start to die down towards the end of 2011.

Any natural brake on self-destructive activity has also been weakened by a spree of joint ventures. Eager to get a taste of North America's new energy bonanza, foreign energy firms are bankrolling drilling costs in exchange for a share of the spoils. In Monday's deal, for instance, South Africa-based Sasol agreed to pay 75% of Talisman's drilling costs in exchange for a 50% interest in some of its Canadian shale assets. It's easier to keep drilling when spending somebody else's money--even though as many as half of all new wells are uneconomical at current gas prices, according to Tudor, Pickering.

So far much of the pain of collapsing prices has been cushioned by hedging. But the prolonged decline in gas prices means this protection will start to slip away in early 2011.

Even so, natural gas supply is expected to climb another 5%. And if the gas price moves higher, there are an estimated 1,000 wells waiting to be completed.

Depressed prices would typically draw out more demand as gas displaces coal in electricity generation and, in time, motorists opt for natural gas vehicles. This should happen eventually. After all, while the price of a barrel of oil is hovering around US$91, natural gas is offering the same amount of energy for the bargain price of US$27. Even traditionally cheap coal is under threat from gas at current prices.

Pretty amazing to see natgas displace coal, which is extremely cheap (if no carbon taxes). The article doesn't paint a pretty picture for natgas, especially given how more production is ready come on-stream if prices move higher. Interestingly, as some of the oil-focused supermajors move into natural gas, some of the pure natgas E&Ps are trying to increase oil output from their shale assets:


And others will look to beef up on oil-producing shale assets, particularly in the Bakken region of North Dakota and the Eagle Ford shale in Texas. Gas specialist EOG Resources has already blazed a trail, boosting liquid output by around 43% against 2009. Chesapeake also has been shifting toward oil, and Sasol may be able to help Talisman do the same.

I don't know how competitive producing oil from shale assets is—do keep in mind that commodity producers are price-takers and compete in a perfect market without product differentiation (this is why most Buffett-like value investors avoid them like the plague)—or how big of a capital investment is required for these oil-from-shale schemes, but I don't have a good feeling about this. If oil prices drop, these companies are going to lose money on these investments (whereas pure oil companies or supermajors will be ok even if oil falls a bit).

Building on the contrarian natgas theme, one area I have been looking at are the independent power producers (IPP). These are utilities who sell into the wholesale electricty generation market and like the natgas commodity producers have no pricing power. Nearly all of them—there are only a few publicly traded ones around—are distressed, with some on the verge of bankruptcy, because of low electricity prices (due to bad economy) and/or low natgas prices (hurts natgas-fired power plants (due to thinner margins) and coal-powered plants (since cheap natgas is replacing  some coal)).

If natgas prices recover, some of the IPPs will rally strongly. However, they are not as leveraged to natgas as pure natgas E&P. A bet on an IPP is more of a bet on the company, with the potential benefit of recovering natural gas prices.

The IPPs would not be favoured by Buffett-type investors—I'm talking Buffett Prime, not the current Warren Buffett—because they are capital-intensive, sell a commodity, and have low and wildly fluctuating ROE. Contrarians, though, should be ok with it since the price looks low. I'm attracted to them because, if you can pick out the ones that aren't going to go bankrupt, they should be able to survive since electricty usage will likely rebound in 5 to 8 years. I would consider the IPPs as very high risk (do not confuse these utilities with regulated utilities or T&D (transmission and distribution) utilities—profits are not guaranteed for IPPs.)

A couple of ideas I'm investigating are Dynegy bonds (stock ticker: DYN) and shares of GenOn (GEN). I'm mostly looking at GenOn so if any of you have any thoughts, let me know. GenOn went through a merger recently so their financials are confusing and not what they seem. GenOn's debtload seems ok, while Dynegy is being bought out by Carl Icahn (shareholder vote required) and is on the verge of collapse, with bonds rated CCC last time I checked. The thing I don't like about GenOn is that their ROE has been horrible for most of the last decade — why invest in a company like this when, say, a Nokia with likely stronger long-term ROE? In any case, let's see how the natgas market pans out.