Opinion: Jamie Dimon, Last Man Standing... Still Not Out of the Woods 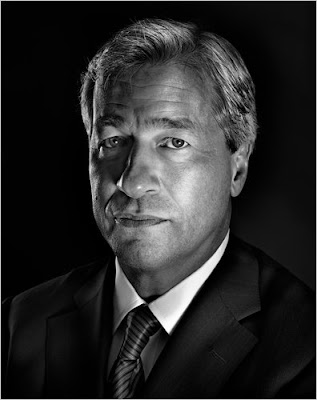 During the mortgage debacle, Dimon’s reputation for averting risk suffered a hit. Oddly, the executive who worried about 100-year storms failed to challenge the industry models on home defaults. Many banks, including Chase, issued “stated-income loans” on which applicants were not required to document their income. Some mortgage brokers clearly encouraged borrowers to lie. Dimon says he thought Chase had enough information, electronically, to police such loans. “We didn’t anticipate the lying,” Dimon says, harping on a familiar theme — that bankers were not the only ones at fault. The blame for lying may have been his customers’, but the responsibility is Dimon’s. As Warren Buffett once observed: every bank is offered bad loans; it is the banker’s job to reject them. At Bank One, Dimon had ceased buying mortgages from outside brokers because their performance was poor. At Chase, he bought them. When I asked why, Dimon said underlings convinced him they were exercising proper caution, adding, “It was a huge business, packaging and selling [the loans] to Fannie Mae.” Turning silent, Dimon rotated his palms face up — as if nothing could excuse his error. “I bought that crap,” he concluded.


...
Judy Dimon says the crisis took a toll on him. He used to stand up to bullies who threatened his smaller twin; now he felt as if he, and bankers in general, were being bullied. There is a picture in the Dimons’ Park Avenue home of James Dean in a sidelong pose and a leather jacket; it reminds Judy Dimon of the contrarian business-school student who also wore black leather and seemed, even as he raced up the corporate ladder, not quite establishment. Jamie Dimon, of course, is a rebel with a very pinstriped cause. I saw him entertaining corporate clients over dinner, rousing his guests to “fight for what you believe in” in Washington, meaning turning back the tide of what he regards as ill-considered regulation. During the Dodd-Frank debates, he argued with a U.S. senator, and later, during a family dinner at the Four Seasons restaurant, he spoiled the family’s night out by ripping into a politician who innocently wandered by his table. He seems to not quite connect the backlash against bankers to the deep recession that Wall Street did in fact trigger.

The recent financial crisis did something in America that would have been unthinkable by many: it turned the public against the banks, their executives, their shareholders, and their bondholders. The executives and bank employees have been at the forefront of the criticism. In fact, some critics even resurrected the 1930's term, bankster—a combination of banker & gangster—to refer to modern bankers. Who would have thought such a turn-about of events could happen in the capitalist of nations, United State of America.

To see the anger of the regular person on the street, one just needs to read the comments to the story quoted above. These are just the liberals. Then we have a whole contingent of conservative-types, including the so-called Tea Partiers, who are just as incensed with the actions of the bankers over the last decade.

Jamie Dimon is one of the good guys... I think! I have been supportive of him in the past while remaining cautious. As most long-time readers know, I can't give my full vote of confidence given the trillion dollars of derivatives exposure (admittedly gross exposure) held by JP Morgan. Most of it appears to be seemingly "low risk" interest rate derivatives but you just never know. Inexplicably, neither Jamie Dimon nor the media have really raised this issue. So far, it's the domain of superbears, goldbugs, and various others who expect serious, looming, problems around the corner.

Writing for The New York Times Magazine, the skilled author, Roger Lowenstein—Buffett fans may recall him as the author of Warren Buffett: The Making of an American Capitalist—writes a glowing article on Jamie Dimon, "Jamie Dimon: America’s Least-Hated Banker." Contrary to the critics, I think the article is fairly balanced.

Reading the article, you could see why some citizens have seen it fit to call bankers as banksters. I am a fan of Jamie Dimon but, unfortunately, like most of the senior banking executives, such as the behaviour of Richard Kovacevich of Wells Fargo and Stanley O'Neil of Morgan Stanley during the thick of the crisis in 2007-2008, Jamie Dimon comes out as someone arrogant and up in the clouds detached from the regular Joe on the street. In particular, Dimon's attempt to shift the blame from the banks to the regulators while resisting proposed government regulation is very disingenious. To make matters worse, quoting Jack Welch (former CEO of GE) doesn't make a convincing case in my eyes.

Jamie Dimon is just trying to make as much money for himself and his shareholders but when he claims that the banks should be allowed to become even larger, I have a feeling he doesn't realize the risk to the country. The problem isn't the present!! I have no problem with JP Morgan getting larger now. Really! I think Jamie Dimon is perhaps the best banking executive, with better risk management than peers, and nothing bad is likely to come (apart from the whole derivatives thing but that is a different matter.) The problem, one that Dimon has likely ignored completely, is that there is no guarantee that some future executive of JP Morgan, or a similar company, will be as good. It's the argument against totalitarian states: 'ok, so the current leadership in China is great but what happens if someone worse, a Stalin, shows up in a decade?' There is no recourse when that happens.

Regulators need to block the too-big-to-fail banks from becoming the too-big-to-save banks. Capitalists and senior executives will always attempt to turn their business into a monopoly or oligopoly but that doesn't always mean it is good for society. This is especially the case if the bankruptcy of such an institution results in automatic taxpayer bailouts, which is essentially the unwritten rule when it comes to banks.