Newbie Thoughts: The risk with warrants from buyouts

December 23, 2010 Newbie Thoughts
Anyone investing in junior miners would be familiar with warrants; they are a popular means to leverage returns. For those unfamiliar, warrants are derivatives that are identical to options except for some differences: warrants are issued by the company itself so they dilute shareholders (they are similar to employee stock options); and warrants tend to have long expiries, often as long as 5 years. Warrants are common in junior resource capital raisings but not so common elsewhere (mostly because they destroy shareholder wealth due to their dilution). There are some risks in using them and one of them is when the company is bought out.

M&A takeovers are a big problem for warrantholders.

Many who buy warrants do so for their long expiry date but, generally, these warrants are way-out-of-the-money—the hope is that the price will rally significantly over the years before the warrants expire. So, if a company is bought out, the buyout price may be below the strike price, rendering the warrant worthless. Such a scenario unfolded in the recent buyout of Gold Wheaton, a gold company, by Franco-Nevada. As the Financial Post reports,


Ever since Toronto-based Franco agreed to buy rival Gold Wheaton on Dec. 13 for $830-million in cash and stock, Gold Wheaton's warrantholders have been in an uproar. They have watched helplessly as the exchange-traded warrants have plunged nearly 70%.


...
According to the terms of the Franco-Nevada offer, Gold Wheaton's warrants will remain outstanding and can be exercised to acquire the same cash and stock consideration from Franco as Gold Wheaton's common shareholders.

That is a problem, because the publicly listed warrants have an exercise price of $10 per share and an expiry date of July 2013. Franco's offer is worth just $5.20 a share, meaning they are not "in the money." However, unlisted warrants are in the money.

Almost instantly following the deal announcement, the price of a single warrant started to fall. They dropped more than 50% in one day, to 26¢ from a high of 57¢ the day before. Since then, the warrants have traded as low as 15¢ and yesterday closed at 18¢.

"I've followed a lot of different mergers with companies that have warrants, and this is the worst situation that I have seen," said Dudley Pierce Baker, editor of Precious Metal Warrants, an investment publication in the United States.

Over the past week, he has received dozens of inquiries from angry Gold Wheaton warrantholders, many of whom want a class-action suit against the merging parties to be launched.

Warrants come with much higher risk than stocks, and sources suggested that Gold Wheaton's warrantholders did not understand all the risks of what they were buying.

"It was highly liquid, it was highly volatile, [retail investors] were having fun with it," said one analyst who did not want to be identified. "But you know, buyer beware. Look at the class of shares you're buying."

Here is a chart of their pain: 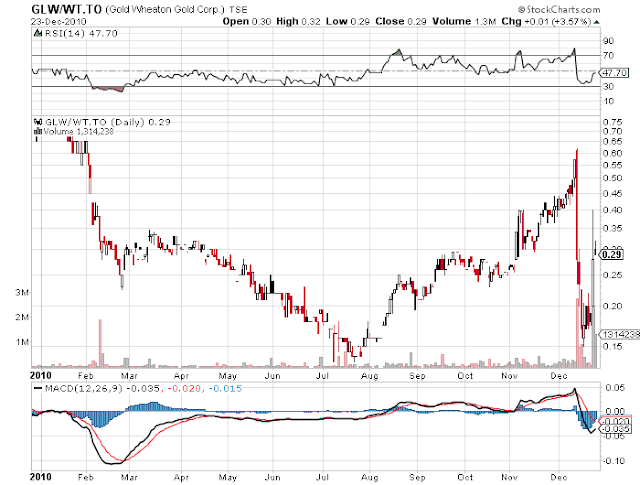 Here is the chart of Gold Wheaton shares, which rose on the buyout offer: 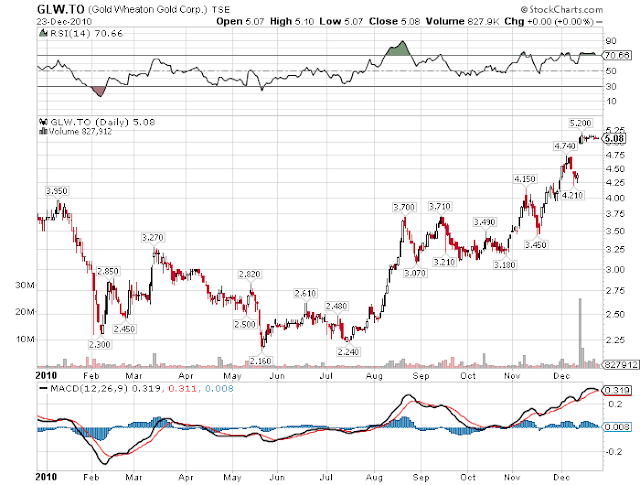 To make matters worse, the warrantholders don't have voting power so they are passive observers during M&A activity.