Historical Japanese Urban Land Prices and a note on Suruga

February 20, 2008 Japan real estate Suruga (1880)
I have been researching Japanese stocks and started looking at real estate more deeply. Japanese real estate stocks and REITs had a big run-up in 2005 (mostly on foreign investor demand) but have come tumbling down in the last year.

I have Suruga Corporation (TSE: 1880) on my watchlist and have been reading up on it. It's a small company so their website only has basic information in English (as a sidenote, for a tech-savvy society, Japan is weak when it comes to the Internet). Suruga's main business is real estate construction.

A company trading 20% below book, with a P/E around 5, and an ROE of around 15% should make me jump at the opportunity but it doesn't. The problem I have is that due to my inexperience I don't know how to judge cyclical companies. I'm not sure if this low P/E is an earnings peak or not. The fact that the stock has sold off and is near multi-year lows makes me think the P/E is not a cyclical peak but I don't understand real estate very well. I like Suruga because of its attractive ROE (for a Japanese company) but that is due to leverage. Suruga, although having good interest coverage and no immediate risk, is leveraged at around debt/equity ratio of 1.

With Suruga near the forefront of my research, I've been looking into Japanese real estate. I'll be posting as I collect information but let's start off with land prices.

A huge chunk of the value of a property is the land. Looking at land prices should give us some idea of the present landscape. As a side note, if the Japanese consumer is to recover, real estate may play a big role in that. Rising real estate prices will boost consumer confidence and allow an expansion of the consumer balance sheet. 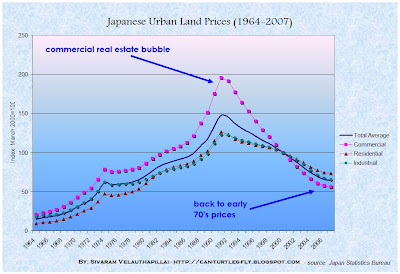 The above chart is urban land prices from 1964 to 1997 from the Japan Statistics Bureau. I simply picked urban land prices because I ran across the data (I suspect rural will show a similar pattern). The graph plots an index with a value of 100 in the year 2000. One thing I am not sure is whether this is adjusted for inflation (I suspect it is but need to confirm).

As you can tell easily from the chart, Japan had a huge commercial real estate bubble. It, along with the stock market, has been in a massive crash for more than a decade. The crash has been so bad that prices are back to what they were in the early 70's!!!

An interesting aside is that Japan had been going through a massive deflation and land prices kept falling along with it. I see some people arguing that real estate maintains value during a deflation but that hasn't been the case here (I believe US real estate also collapsed during the Great Depression--another deflationary episode). The only safe things during a deflation are cash and bonds (that don't default).

Let's look at the year-over-year change in urban land prices: 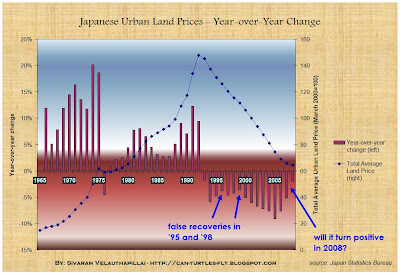 This chart plots the year-over-year change in overall average urban land price. Note that the labels for the year are staggered a bit to the left (the chart ends in 2007). This chart literally shows the history of modern Japan.

As is generally the case with any asset, the price appreciation in the early stages tends to be really high. In this case, Japanese land prices went up more in the late 60's and early 70's than during the bubble years in the 80's. In the earlier stage, the index went from around 10 to about 60, for a 6x move; whereas it only went from 60 to 150 during the boom years, for a 2.5x appreciation. Japan Inc. made the frontpages in the 80's but the country's key prosperous period was earlier. It pays to be early to the party--you can have the appetizers for yourself ;)

The prices hit a peak in 1991 and it has been falling ever since. It has been a disaster for anyone who bought anywhere the top. In fact anyone who bought since 1982 or thereabouts is underwater (of course, if the land were put to productive use, the yield on that (eg. rent) should compensate some of the loss). There have been some false recoveries along the way, burning anyone who ventured into real estate (this has been the case with stock market investors as well, with many getting burned on Japan over the years).

The decline has been slowing lately, and looks like it is about to turn positive. The question for real estate investors is whether there will price appreciation in 2008 (I should note that some other real-estate-related measures had prices turning positive for the first time in 2007). I want to do more research on valuations (Japan is still expensive relative to many other developed countries--although land is scarce there) before I form a strong opinion but if I had to guess right now, I would say that prices will appreciate within a few years. However, there are some risks in Japan.

One of the immediate risks is that Japan is heavily leveraged to exports, and with the US economy slowing down, any weakness in China may send Japan into a recession. My understanding is that Japan fell down after the Asian Flu back in 1997 so a similar risk is a threat.

So will prices rise for sure? The answer is tougher than for many other countries. One of the longer-term problems with Japan is that they have an aging population. Their population will start to contract sharply so housing and land demand will decline. So prices don't necessarily have to rise. However, given the steep drop and present valuation resembling the 70's, I think prices will start to rise. The question is when.


Next on my list are real estate prices (as opposed to land) and stock prices of companies engaged in the industry.