February 21, 2008 Ambac (ABK) MBIA (MBI)
Given MBIA's recent strategy of withdrawing from the bond insurer trade association, Association of Financial Guaranty Insurers, it looks like the big three (MBIA, Ambac, and FGIC) are going to split their muni bond business from the structured product business. Here is what MBIA had to say:

Jay Brown, Chairman and Chief Executive Officer of MBIA said, "It has become clear that MBIA and the other members of AFGI no longer share a common vision for the industry. For one thing, we believe that the industry must over time separate its business of insuring municipal bonds from the often riskier business of guaranteeing other types of securities, such as those linked to mortgages. Additionally, we disagree with AFGI's positions on the appropriateness of monoline financial guarantors insuring credit default swaps and the ability of U.S. financial guarantors to reinsure U.S. domestic financial guarantee insurance transactions with foreign affiliates without paying U.S. corporate tax rates."

When one of the founding members and the largest company in the industry leaves, it's pretty much the end of that trade group. If you recall, Ambac and FGIC already indicated that they are considering a split of some sort. So MBIA joins the rest (assuming I'm reading the CEO's message correctly). (It's interesting that MBIA brought back the original CEO who battled Bill Ackman all these years).

The real question is what the nature of a split will entail. As I have speculated before, if they get cover from the government, and if they re-capitalize and/or leave a big chunk of the capital with the structured product side, it may work out.

After running across this article by Tom Brown, I took a look at Ambac's mortgage and home equity exposure by originators. Tom Brown refers to a Moody's ranking of originators by underwriting quality and I am using that information in the table below. I am also not familiar with the mortgage lending universe so I am not sure if there are subsidiaries that I'm not marking with the proper colour. Only the lower rated assets (BBB+ or lower according to Ambac internal rating) are shown since those are the mostly likely to post losses. However, I should note--and this is important--what likely matters is ratings migration. If something was originally rated BBB then it is likely that Ambac wrote in more protection (or charged more) to compensate for the risk. The huge losses, in contrast, will come from those originally rated AAA but are now in the BBB segment.

I only have access to the publicly listed information on the website so, unfortunately, this excludes the CDOs and CDO-Squareds, which is where the real problems are (someone working in the industry may be able to use Bloomberg or some other service to look into the CDOs but I don't have access). 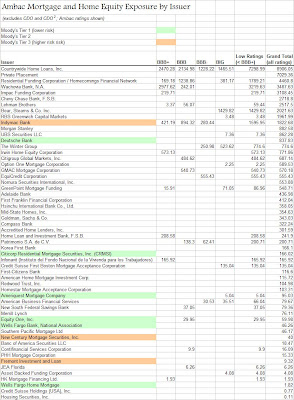 The table shows that most of Ambac's originators lie in the middle of the pack (or are unknown). Ambac has low exposure to most of the companies with good mortgage underwriting standards.

Ambac's problems are with CDOs and CDO-squareds more so than with RMBS so this information is simply another additional point to consider. The company where direct RMBS matters is MBIA (but I believe MBIA didn't publish this information).