February 29, 2008 commentary
I have never been one to accept the decoupling theory. In case you are not familiar, this is the theory that postulates that emerging markets do not depend on the US economy anymore. The thinking is that one can avoid market corrections by investing in foreign countries.

The first few months of this year has put that theory to test and it hasn't held up well so far. Plotted below are the US$ year-to-date returns for some key countries (using Dow Jones indexes). 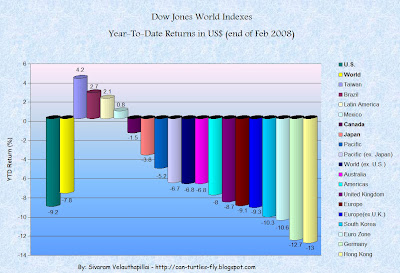 As things stand at the end of February, USA had a return of -9.2% versus -7.8% for the world (including USA). Most of the countries are posting negative returns. Canada is holding up well due to strong commodity prices but my guess is that it will fall when the US economic slowdown is certain and the effects of the 'Subprime Virus' works its way throughout the world. Japan--a market closely watched by me--is holding up well due to strengthening of the Yen.

Historically all the world's stock markets have been influenced by each other (except for small and/or obscure, undeveloped, countries). I think when all is said and done, the world will be no different now than it has been for the last century. Decoupling theory seems premature...