February 23, 2008 Ambac (ABK)
Sticking with the chess analogy I had been using for months, it looks like Ambac will make its final few moves soon. After the strategy being discussed below is executed, it will come down to waiting and seeing how subprime mortgage losses and recoveries. If things deteriorate much further, the company is done for (from a shareholder point of view). Sadly for me, I was investing with the view that Ambac would have raised around $1.5 billion a few months ago. Management made a huge mistake and we are now raising greater amount in worse market conditions. Anyway, we just have to play with what we have (it's a good lesson for investors I guess).

Originally reported by CNBC, bankers are close to finalizing the capital injection plan for Ambac. If rating agencies approve the plan, it will supposedly be unveiled Monday or Tuesday:

Under Ambac’s plan, one part of the company would guarantee relatively safe municipal bonds, while the other would insure more complex securities backed by mortgages and other debt.

The company also hopes to raise $2.5 billion through a rights offering to its existing shareholders; the sale will be backed by banks. Ambac also plans to raise roughly $500 million in new debt, according to the person who has seen the plan, who was not authorized to talk about it.

The banks, which include Citigroup and UBS, delivered a draft of the plan to Ambac and credit ratings agencies on Friday, and the company is expected to give its formal consent soon. Officials involved in drafting the plan hope the two new subsidiaries will both receive triple-A ratings, though the firm backing mortgage-related bonds could be rated slightly lower.

There are essentially two stages involved. One is to raise $3 billion. The other is to split the companies. I suspect the expectation is to keep the muni bond business rated AAA, while the structured product business is kept AA or higher.

Ambac's proposal seems to entail a $2.5 billion rights offering, along with $500 million in debt. Needless to say, this is going to involve massive dilution for shareholders but it will keep the muni bond business functioning. We don't know the details yet but let me speculate on a possibility.

In the example, I'm picking a case where they offer shares at $7.50 (a 25% discount). I'm not sure if that is too small of a discount (yes, the discount may need to be bigger :( ) but it seems somewhat reasonable. In that case, book value per share will drop to $14.33 from $22.41. Given the big discount in the stock price, it's hard to say how the stock price will behave.

This pretty much means that old investors will have a tough time making money unless (i) they participate in the offering in order to avoid dilution, or (ii) mark-to-market book value losses reverse in the future. The adjusted book value slightly higher but that still won't be enough overcome the dilutive effects.

Anyway, let's wait and see the terms before making a decision.

Splitting an insurance company can mean a lot of different things. For instance, if you split with one subsidiary reinsuring another, that's totally different from if a split results in diverse units with different ratings. As far as I know, it hasn't been executed by monoline insurers before. However, it has been pursued by other types of insurers such as P&C (property & casulty). I think the monoline split will be similar to the p&c splits of the past.

There were two big splits in the 90's in the p&c insurance sector. If one is interested, they should look up ITT Hartford's reorganization in 1992, and the Cigna split in 1996. The Cigna split, as you will see below, is somewhat similar to what the monolines are trying to carry out right now.

You can search for articles such as More Cigna Splits Unlikely, Raters Say (National Underwriter: Property & Casulty Risk & Benefits Management, July 22, 1996. vol 100 Issue 30, p7) at your library. Now that The New York Times has free access to its archives, I was able to dig up a couple of articles on the Cigna split.

Cigna was a property & casulty insurer who ran into big problems in the mid 1990's due to potential asbestos and tainted soil liabilities. It tried to split in order to contain the problems in one unit.

The Cigna plan calls for the creation of one group of weaker, inactive subsidiaries that would not sell new property and liability policies but would pay claims as they arose on old policies. The active, stronger company would issue new policies and would benefit, Cigna officials say, because it would have higher financial ratings once it was separated from the inactive unit...

Unlike other corporations, whose first loyalty is to their owners, or shareholders, insurance companies have long been regulated under the philosophy that their primary obligation is to policyholders.

(source: Market Place; Who would win in a split-up at Cigna? It depends who is asked. By MICHAEL QUINT. Published: December 8, 1995. The New York Times)

Unlike Ambac, Cigna was a bigger company with a stronger balance sheet so this split was accompanied with some support from the company:

To win approval from state regulators, Cigna agreed last week to cover losses in excess of $800 million at the unit with the largest claims, up from $500 million previously.

In addition, Cigna said that by 2001 it would add $500 million in new capital and financial support to the unit holding its discontinued asbestos and environmental businesses. In last year's third quarter, the company added $1.2 billion before taxes to its reserves to pay asbestos and pollution cleanup claims.

Cigna's decision to divide the businesses was done to allow the more profitable unit to win higher ratings on its ability to pay claims. That would allow it to sell policies to companies that only buy from high-rated insurers.

To sum up, Cigna seperated its asbestos and environmental clean-up liabilities from the rest of its business. The former unit was put into run-off right away. The main reason behind this strategy was to get a higher rating for its well-performing business. What the monolines are attempting to do now is the same thing! They are trying to keep a higher rating for the muni bond business, while the structured product business tries to survive with an indepedent rating. 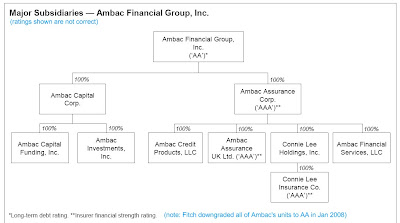 In the monoline case, without knowing any details or being a lawyer, I think the split shouldn't be too hard. The structured products are radically different from the muni bond insurance products so a split shouldn't be hard from an organizational point of view (i.e. should be easy to split the employees, collected premiums, loss reserves, etc). However, from a legal point of view, a split is likely complicated. Ambac will have to ensure that the claims-paying ability of the structured product insurance is still relatively the same as before the split. The buyers of the structured product insurance have a right to be certain that their claims will be paid.


So to sum up, next week will be big. I'll have a big decision on what to do with a rights offering...

(Non-Investment note: I changed the layout of this blog slightly. Hopefully it'll help rather than hurt the navigability. I replaced the text labels with a cloud add-on courtesy phydeaux3. If anyone has any suggestions to improve the blog let me know please. Thanks for the cool free add-on phydeaux3.)