April 03, 2010 bonds and credit instruments David Rosenberg Jim Grant
During Grant's 2010 Spring Conference, Jim Grant of Grant's Interest Rate Observer debated David Rosenberg of Gluskin Sheff + Associates  on the merits of buying US Treasury bonds. Grant is very bearish on the bond while Rosenberg took a bullish stance. For the video of the debate, click on the top video from this link.

Overall, anyone versed in the bull vs bear cases for US Treasuries wouldn't learn much from the debate. But if you want a refresh of the two sides, it is worth checking out.


I think one of the key points in favour of bond bulls—mentioned here by David Rosenberg but I have quoted Hugh Hendry and others saying the same thing—is that the American public is largely underweight long-term government bonds (pension funds, endowments, and others are also underweight bonds.) So, bears like Jim Grant may be correct in saying that bonds move in hard-to-decipher long cycles and it may have turned; but that is the case with stocks too. Stocks have been in favour for around 30 years now (note that I'm not talking about whether stock returns have been good or not; rather, I'm talking about the percentage of the portfolio that is allocated to stocks.)

I don't have much confidence in my stance but I am still leaning towards the bullish side for long bonds. The price chart over the last three years for the 30 year, 10 year, and 5 year bonds looks like the following: 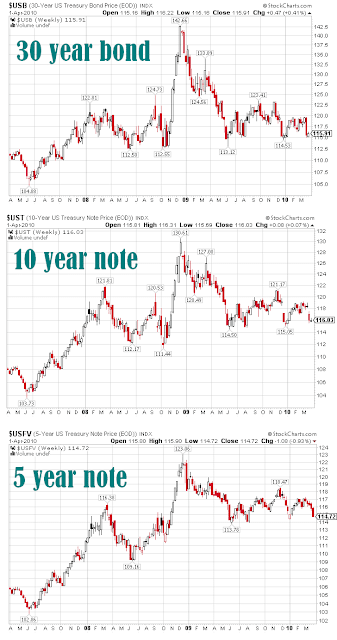