April 24, 2010 Great Depression market valuation
History books of the future may mark the stock market bottom set in April of 2009 as a major bottom. It may turn out to be a 100-year bottom in nominal terms. How does the picture look compared to the 1933 bottom?

The following graph illustrates the S&P Composite price performance (monthly data) from the 1933 and 2009 bottoms. I started the chart 6 months prior to the bottom and, in addition, the 1933 line is scaled so that the bottom aligns with the 2009 bottom. As usual, click on image for a bigger picture. 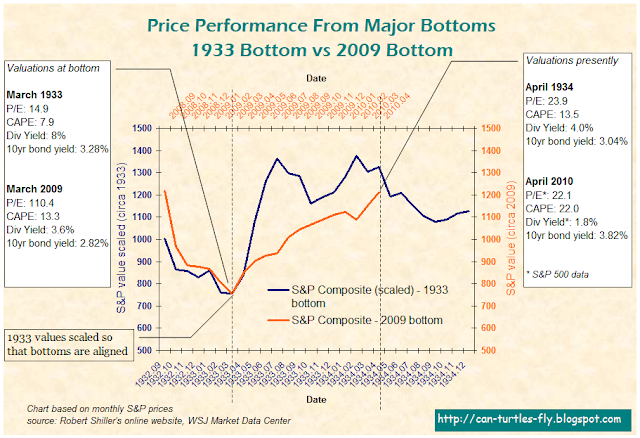 Thanks to Robert Shiller for freely providing most of the data; I also used the current P/E and dividend yield from WSJ Market Data Center (I can't find the current yields for the S&P Composite so I'm going with the S&P 500.)

The 1933 rally is considered to be the biggest stock market rally in (American) history (do note that the numbers can vary slightly if you use a different index, such as the DJIA.) As you can see, the current rally from the 2009 bottom is almost as powerful and ranks as the 2nd biggest rally in history. Interestingly, both, the 1933 bottom and the 2009 bottom, appear to be set in April.

The next question is valuation. Both rallies appear to be similar but it would make a big difference if one is off a lower valuation.

I marked my favourite metrics, such as the P/E ratio and long term bond yield, on the chart (note that CAPE is the cyclically adjusted 10 year P/E ratio, aka Graham-Dodd P/E ratio.) One set shows the valuations in 1933 and 2009 at the bottom; and another shows similar stats in the current month (i.e. after a rally of 1 year and 1 month from the bottom.) For reference purposes, I have reproduced them below:

Valuations at the bottom


Valuations after a rally of 1 year and 1 month


It's very difficult to say with certainty (since the bond yield was lower in 2009) but I think stocks were cheaper during the 1933 bottom, compared to 2009.

It's hard to interpret the 2009 P/E since it is very high. Very high P/Es or negative/undefined P/Es can indicate either overvaluation or undervaluation (depending on whether the market is cyclical and/or contains one-time charges.) Hence you cannot use such P/Es with a cursory glance and need to do a lot more work to figure out the structure of the stocks that compose the market. For instance, if the market was mostly cyclical (such as the stock markets in Russia or Brazil,) a high P/E is can actually be a good entry point.

Moving to the 10-year P/E ratio (CAPE,) it appears that stocks were much cheaper during the 1933 bottom. But it's hard to say for sure. The march 2009 CAPE was 13.3, which is somewhat cheap, when long term interest rates were much lower (2.82% in 2009 vs 3.28% in 1933.) When interest rates are low (i.e. opportunity cost or discount rate low,) higher valuations can be sustained. The 1933 P/E does look much lower so valuations were likely lower but probably not as much as it seems. If interest rates were comparable, the 2009 P/E would likely have been lower.

Having said all that, there is one indicator that clearly flags the fact that stocks were much cheaper in 1933: the dividend yield**. The 1933 dividend yield of 8% is way beyond the 3.6% stocks yielded last year.

So, overall, stocks were cheaper at the bottom in 1933 than in 2009. The 2009 bottom is very confusing given the huge bank write-offs—some of those losses may reverse—but it wasn't very cheap.


As for the present (i.e. a rally of approximately one year and one month from the bottom,) the results are more obvious. In my mind, there is no question that the current valuation is very high compared to the April 1934 valuation. With interest rates a little less than 1% higher now, the 1934 CAPE Of 13.5 is much lower than the current CAPE of 22. Similarly, the dividend yield in 1934 was 4% versus the present 1.8% for S&P 500 (I couldn't find the data for the S&P Composite but it should be similar.)

In fact, it appears that the current rally has been so great that stocks have become overvalued so quickly from a major bottom. It's amazing that the CAPE, which is a 10 year average and hence doesn't usually move much in an year, has gone from 13.3 to 22 in a little over an year.

Long-term P/E is around 15 so the present CAPE of 22 indicates overvaluation***. This is especially important given that the present interest rate of 3.82% is not low. If it were lower, I think a higher P/E can be sustained; but if rates stay around 3.8%, the market is overvalued in my opinion.

We have been witnessing the second biggest stock market rally in history (time to cue the violins for those who haven't participated in the rally, which includes yours truly  :( .) If the current rally continues for a bit longer, it will surpass the 1933 rally. Valuations looked low, although not exceptionally low, during the 2009 bottom but they have risen significantly in the last year. The increase in valuation contrasts with the 1933 rally, which didn't see valuations rise quite as much.

The current valuation appears to indicate that the market is nowhere near cheap. A CAPE of 22 is in the upper range of the historical data. Future returns are likely to be low unless earnings rebound. If earnings can rebound strongly from here, the situation wouldn't be so bad. Given how I'm expecting corporate taxes to go up and a greater share of economic profits to go to workers, I don't think we'll see significant increase in earnings. But there is one hope. That hope is that bank write-downs of questionable assets start reversing. If financial institutions can start writing up the assets they wrote down in the last couple of years, the situation would improve. So far, bonds, particularly junk bonds, have recovered strongly; but mortgage bonds and consumer loans still appear weak. The fact that investors such as John Paulson, who shorted mortgages earlier, are now long similar assets may indicate that the bottom has been hit for some of those assets.

* There was a surprise I came across when I was working with the data. I was expecting to see strong deflation in the 1933 period but that was not the case at all. In fact, inflation from the 1933 bottom to April 1934 was higher than from the 2009 bottom to April 2010. The rally from March 1933 to April 1934 posted a 75.3% nominal return and a 66.0% real return whereas the comparable 2009 rally posted a 60.0% nominal return ad a 55.8% real return. A full 9% of the 1933 rally was due to inflation while only 4.2% of the 2009 rally was due to inflation. Thinking more, I guess I shouldn't have been surprised. After all, the gold exchange standard was removed and that probably played the main role in jump starting the economy.

*** One can argue that the present numbers aren't that bad if you assume earnings are depressed, and that companies will pay out more dividends in the near future. There is some merit to that view on its own. However, if you are comparing to 1934 that clearly doesn't mean much, given how 1934 also had a poor economic environment with possibly low earnings and weak dividend payouts.