March 01, 2010 Berkshire Hathaway (BRK.A)
Can France win the World Cup this year? For those in America, I'm talking about soccer. You know, people kicking round balls ;) 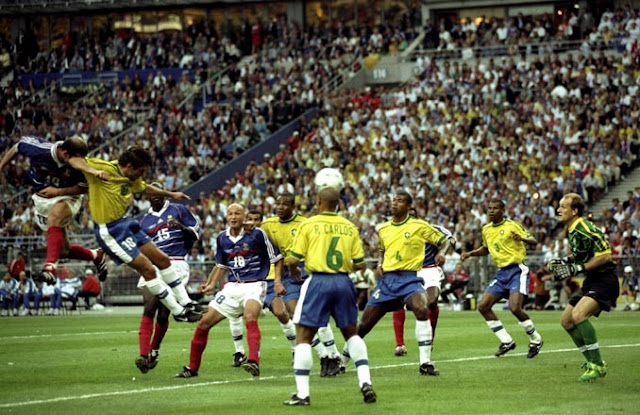 (Photographer unknown. Source: kickoff.com)
The last time France won, in 1998, the player above scored two key goals in the final (one of them is the picture above.) Of course, they don't have that guy anymore.

Well, lack of confidence is the last thing many in the Les Bleus camp need right now yet it seems one of Berkshire Hathaway's insurance divisions is apparently set to lose as much as $30 million if France wins. Marketwatch reports, "'If France wins the World Cup, I think we’re going to lose about 30 million bucks or something like that,' he [Warren Buffett] said on an early cable news show. 'We get all kinds of risks that come into Berkshire.'" Apparently the bet is the idea of Ajit Jain, the insurance genius at Berkshire Hathaway. The article provides no details but I suspect Berkshire is insuring one of the sponsors against a world-wide prize or contest of some sort.

MarketWatch also reports the odds: "France is a 12-1 underdog, according to paddypower.com, an Irish online betting site. The shortest odds are on Spain, 4-1 while the longest odds are on North Korea, 1,000 to 1." What?? I'm truly dissapointed that North Korea only has odds of 1000-to-1. Even the contrarians who bet on contrarianism-for-the-sake-of-contrarianism wouldn't bet on North Korea given the likely, lowly, payout of those odds ;)