Quick update on the markets

March 28, 2010 bonds and credit instruments commentary currencies
The following is a graph, courtesy stockcharts.com, of three key indicators I like to look at: stocks, US treasuries, and the US$. 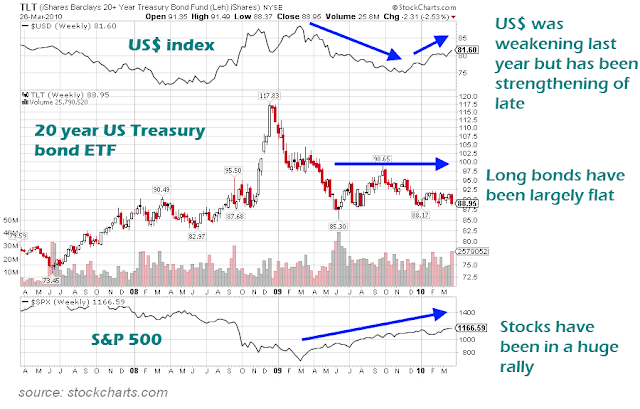 There aren't many surprises in the chart. As many would realize by now, the stock market has been in a major rally (haven't checked but probably the 2nd or 3rd biggest rally in the last 100 years); bonds have gone nowhere (a lot of stories of gloom and doom about USA possibly running into difficulties with debt financing but prices are basically what they were almost an year ago); but the US$ index chart is a surprise to me.

I haven't been following the markets that closely this year, and sitting in Canada and seeing the C$ strengthen, I was thinking the US$ was weakening considerably. But it looks like the US$ index has actually been strengthening. The cause is likely a weak Euro, the other major component in these currency baskets. (As a side note, if you are new to currencies, do keep in mind that there can be a big difference between a currency cross and a currency index. A currency index, such as the US dollar index is measured against a basket of currencies, while a currency exchange rate is against another specific currency.)

Usually a stronger currency is good for government bonds (or indeed any asset denominated in that currency) but that hasn't been the case with US Treasuries lately. US Treasuries have largely been flat (to slightly negative) while the US$ has been strengthening.

In the last decade, the C$ has also been inversely correlated with the US$ (most of the time) but that hasn't been the case lately: 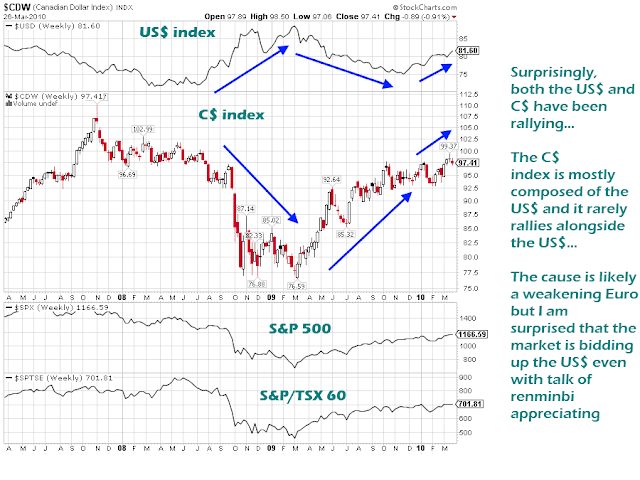 Maybe it's just a temporary blip but I can't remember the last time the C$ index appreciated along with the US$ index. The main factor driving all this is the weakening Euro. It remains to be seen what happens when the Greek problems are sorted out. Will we see the US$ start to weaken or will it continue to strengthen?

Another interesting thing is that market participants have been bidding up the US$, even though some claim that China is about to re-value its currency upwards. Instead of going into another currency or hoarding gold, investors still seem to be confident enough with the US$.

A strengthening US$ is usually bad news for the commodity complex but so far nothing significant has occurred. The CRB index (not shown) and WTIC crude oil (not shown) have been flat for several months now. It's way too early to say but I wonder if commodities are topping out. One of the big question marks for commodity bears like me is whether crude oil set a multi-decade peak in 2008. If crude oil doesn't break US$147 within a few years, it has likely entered a bear market. Crude oil should be strong in the next few months, as the summer driving demand keeps it up, but if it tops then it may indicate that commodities may have set a multi-decade peak in 2008.


For those keeping score, the C$ has appreciated against the US$ in the last 4 or 5 months so if you are a Canadian contrarian :) you should deploy more money into US$-denominated assets (assuming you don't expect the US$ to fall off a cliff into oblivion ;). But, I have been saying that for several years now and been completely and utterly wrong. So maybe it pays to not listen to anything I say ;)