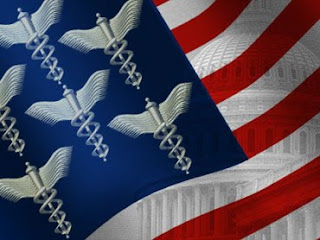 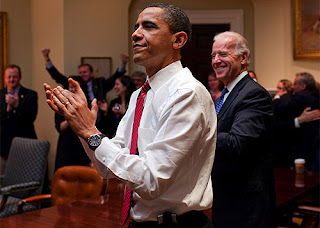 (source: Top image from CBS News; Bottom image from Esquire)
Today is a historic day in America. After many years of putting the problem aside, not to mention aborted attempts by previous administrations, the Obama administration has staked its legacy on reforing the US healthcare system. In what will go down in history as one of the largest government restructuring of an industry, the US government is finally attempting to tackle the spiralling healthcare cost problem. It is a huge gamble for Barack Obama—I would put the risk similar to that of George Bush's gamble on the Invasion of Iraq—and the pay-off can be an absolute disaster; or it can be one of the most important things the US government has carried out in several decades.

I am not a legal expert and haven't followed this issue closely but there is always a possibility of a future government undoing the proposed changes. However, given the highly-complex reform and the difficulty in getting many to agree on any point, I think the current law will largely remain for a long time—probably for my life.


America badly needed to reform its healthcare system. I don't know if I pointed it out before but worker wages have essentially been flat for more than a decade. However, compensation for workers have actually gone up in that time period. What has happened is that healthcare insurance costs sucked up nearly all the wage growth. The lack of socialized healthcare or any comprehensive system also creates a huge social cost. There are many stories of middle-class families ending up bankrupt because they lost their jobs and ran into health problems (for those not familiar, employers generally pay the healthcare insurance in America; furthermore, if you are poor or old, there is government healthcare assistance but if you are working class or middle class, you are on your own and pretty much have to spend all your savings.) The skyrocketing healthcare costs have also made many American industries uncompetitive (it's hard to compete when governments pay for healthcare in other countries while American corporations bear the full brunt of the costs in America—this actually wouldn't have been so bad if the private sector in America didn't end up paying more than the public sector in other countries.)

The following chart from the BBC shows how costs have skyrocketed in the last decade and a half:

Healthcare spending, which was under a trillion in the early 90's, has skyrocketed well past the $2 trillion mark. The growth is far above GDP growth, income growth, or any other relevant economic statistic. Most of the increase has been in private healthcare spending and this goes to show how the current system hasn't been very effective.

It is not clear to me how much of this explosion in health costs is due to the ageing population. I would expect healthcare costs to rise as the population ages. Nevertheless, my guess is that most of the increase is due to inefficient private sector insurance schemes rather than the ageing population (the ageing poulation is a very slow trend and likely won't cause a near-exponential cost increase like here.)

The following charts, also from the BBC story, illustrates how inefficient USA is compared to some developed countries:

USA spends way more than countries like France or Britain. But I will note that services in USA are probably better for those with health coverage. If you include the total population, including 15%+ who don't have any health coverage (and hence will be a health liability for the country in the future,) the numbers don't favour USA at all.


Barack Obama certainly made a gutsy move here with his healthcare reform. It was a key part of his presidential campaign and he is essentially betting the near-term future of the Democratic Party on this policy. It's a bold move, far beyond anything attempted by any other administrations in recent memory, and it remains to be seen if it was the right decision. Like long-term investing in stocks, the consequences won't be known for many years. Your kids are more likely to benefit or lose from what happened today than you are...