March 06, 2010 Amazon (AMZN) fundamental analysis Mega Brands (TSX: MB)
People who are lazy, like me, and rely on earnings numbers (such P/E ratios or EPS growth,) need to be always mindful that earnings may not accrue to the shareholder in the long run. This occurs when a company earns money (i.e. is highly profitable) but the money is squandered away in some manner.

Sometimes, it is not the fault of management per se (i.e. not entirely bad capital allocation); it can simply be the nature of the industry. One of the most common ways this can occur is if the profits need to be recycled into the business just to keep the business running.

What really matters for the long-term investor is something more along the lines of "owner earnings" or "free cash flow." Investors who lean more towards value investing tend to rely more on FCF (free cash flow) than on earnings. A good example of this is fund manager, Bruce Berkowitz, who appears to rely almost solely on FCF and rarely talks about EPS.

Like most on the Street, I primarily rely on EPS (earnings per share) but I do look at FCF if I'm contemplating a long-term investment. I have been evaluating Mega Brands (TSX: MB), a distressed toy company, and wanted to highlight how earnings can differ materially from FCF. I'll finish off by also presenting an example that is the opposite, where FCF is much higher than reported earnings.


Not As Profitable As It Seems

Mega Brands is a company that was posting profits that were much higher than FCF, and hence appears to have been less profitable than the profits indicate. The following spreadsheet shows the 10-year financials with some key metrics: 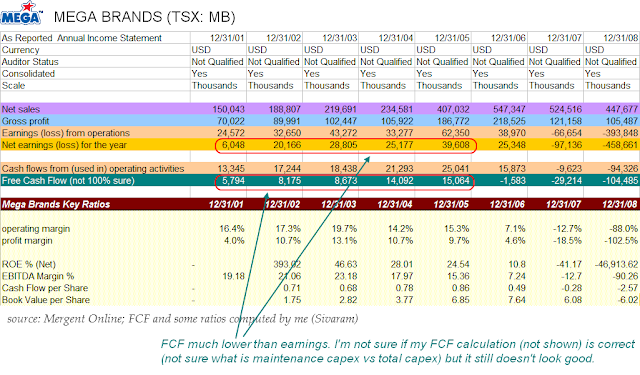 I am not sure if I computed the FCF properly—I simply subtracted capex from operating cash flow reported by the data provider (did not check official fiancial statements); it's also not clear to me how much of the reported capex is maintenance capex needed to sustain the business—but, nevertheless, it gives a good idea of the situation. Mega Brands has faced some life-threatening problems in the last few years so I'm only concentrating on the first few years (basically, I'm trying to figure out its long-term earnings power.)

As you can see from the highlighted portion, earnings has been far higher than FCF. Roughly speaking, earnings were around $24 million in the first 5 years of the millenium while free cash flow was only $10 million. Even if you assume only a portion of the capex I was subtracting (not shown) was maintenance capex (i.e. capex needed to sustain the business), the picture doesn't change much.

If you blindly used the $24m earnings figure, and attached some P/E multiple to the company, you would get widly different valuation from the true worth of this company to a shareholder. Assuming these numbers are correct, Mega Brands is only creating a wealth of $10m for the shareholder, even though the earnings number seems to indicate it can generate $25m in profit per year.

To sum up, Mega Brands is not as profitable for the owner as it seems. This doesn't necessarily mean it's not worth owning—depends on the price you can buy it at—but it does mean that blindly using the earnings numbers will probably generate a rosy valuation for this company.

How About A Company More Profitable Than It Seems?

I want to contrast the above scenario with a company that shows opposite numbers. Namely, a company with FCF much higher than earnings.

The example I'm going to use is Amazon, which also happens to be my favourite company in the world—one where I would put 100% of my net worth in (at the right price.) I picked off some relevant data from Morningstar below: 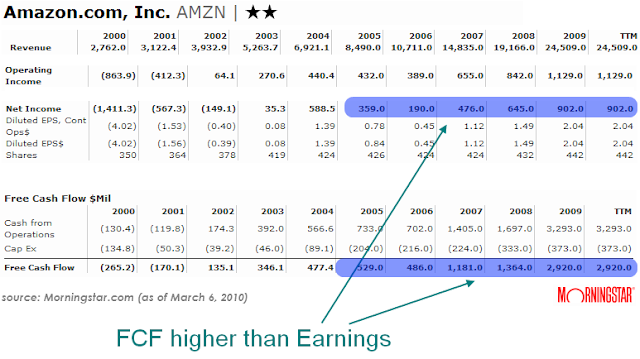 Assuming the numbers are correct, the data clearly shows how Amazon's profitability is far higher than what its earnings indicate. While earnings straddles just below the $1 billion mark, FCF has been well above $1 billion in the last 3 years. I don't know how sustainable the 2009 number is (could be a hard-to-sustain one-time boost from the Kindle,) its free cash flow in 2009 is 3x higher than income.

Overall, a company like Amazon is more attractive to own than one like Mega Brands (ignoring everything else and just looking at FCF vs earnings.) I suspect a situation like Amazon (but not Amazon for reasons mentioned below) may provide fundamental investors with an edge. Many on the Street appear to be neither long-term investors nor fundamental investors so they may ignore the "hidden" FCF picture.

So does Amazon contain hidden potential? Not anymore. As always, the price dictates the final decision. In the case of Amazon, everyone is aware of what I have described. Amazon's forward P/E is 37 (according to Morningstar) and it has been priced at very high P/E multiples for years. Clearly the reason people are tripping over themselves to buy Amazon stock at a P/E of 37 is because its true earnings potential is much higher than the earnings indicate. Judging by the FCF, I think Amazon's current P/E is actually around 20. That's still high, and that's one reason I haven't bough any shares, but the market is treating this like a growth stock (basically it's like a baby Wal-mart in the 90's.)

If you are a long-term investor and mostly concerned with the wealth that accrues to you (as opposed to shorter-term investors who are more concerned with whether the stock price is going up or down,) you need to be careful about using reported earnings. Usually earnings is close to free cash flow but, as shown above, it can deviate materially at times. For smaller companies that may not be followed as widely, a higher FCF than income may mask true profit potential. Such situations may be potential investment opportunities, depending on the price.