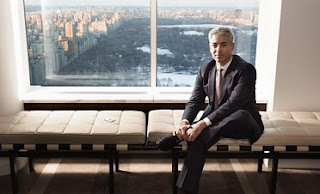 I have trouble saying 'MBA' without saying 'MBIA'
— William Ackman

I have the same problem as William Ackman when it comes to MBIA. I get it mixed up with MBA and, unlike Ackman, I also get it mixed up with MBNA. In The Optimist, Jesse Eisinger of Portfolio magazine presents an in-depth profile of William Ackman. For those not familiar, William Ackman is a hedge fund manager whose reputation for activist investing has risen rapidly in the last few years. This article has been making the rounds on the blogs but I thought I would highlight it in a separate post. It is only fitting given how I had mentioned some negative things about him in the past.

Long time readers of this blog may recall how I have been critical of William Ackman over the years. Part of it possibly arises due to opposite bets on the fate of the monoline bond insurers; but most of it is probably because he is not the type of investor that I hold in high regard. I'll bet if we were in the same room, our personalities will conflict. William Ackman is adament and persistent like me. But he is very arrogant, unlike me. I also think he is primarily a good salesperson. This is not to say that he doesn't do his homework but there is a lot of showmanship to his game, and this doesn't sit well with me.

Having said all that, I do think, as I remarked in my Turtle Awards post early this year, we need more people like him. He is an activist investor and he does push companies to make changes. Whether those changes are good or bad is another story, but at least he is doing something.

I also respect his major contrarian bet against the monolines. It was a spectacular call and possibly one of the best contrarian bets in the last 30 years. He basically shorted (through CDS) a AAA-rated company that everyone—regulators, rating agencies, counterparties, customers, investors—thought had a super-strong balance sheet. This was, back then, the equivalent to shorting the highest quality, safest, and dominant player in an industry with practically no visible problem.


I think Carl Icahan's mantle has been passed to William Ackman...but Ackman needs to lay off his super-high-leverage bets, usually using options or swaps. It has completely blown up with Target, and he also has swaps on Borders if I'm not mistaken, which likely will also blow up, if it already hasn't. Ironically, Ackman may have correctly pointed out the flaws of high leverage used by monolines, but he also got burned using leverage with Target, Borders, and other investments. Nevertheless, he posted (roughly) an impressive -12% last year with his main funds.