Supply & Demand isn't enough for commodities... Need to figure out price as well

JC: "If the supply of a commodity is falling and demand is rising, the price will rise."

Is the above quote by a commentator on FWallStreet blog true? Most would say yes. It's basic economics right?

The goal of this post is to prove that you can't bet on a commodity simply based on supply & demand. You also need to figure out if a commodity is overvalued or not! Let's look at the history of the oil market.


As value investors like to say, price is what ultimately matters. Well, the same concept holds true for commodities, even though it may not seem important at times. Certainly many macro investors, who are ones that tend to bet their fortunes on commodities, seem to ignore price. Perhaps it's proper for macro-oriented investors to do so, since they generally invest based on 'themes', 'trends', 'supercyles', 'fads', 'secular bull markets', and so forth. Others, however, should pay attention to price because if your macro call turns out to be wrong, you are floating on thin air...high above the land...without a parachute ;)

It is not sufficient to know how supply and demand stack up for a commodity. It is just as important to figure out what the price should be. By that, what I mean is that it is important to know if the price implies the commodity is overvalued or undervalued.

If, say, oil demand is higher than supply, isn't it fair to assume that prices will rise? If not this year then next year, or maybe the year after at worst. But certainly not 15 years from now, right?

I will plot a couple of charts of oil that goes to the end of 2007 (unfortunately it misses the 2008 peak.) The data is from the excellent BP Statistical Review of World Energy June 2008 (I highly recommend this free source for anyone that is interested in the oil&gas sector. You can access their extensive spreadsheet near the bottom-right on the page, or use their Java-based plotting tool for a quick visualization. It contains literally anything that you may want, including price/supply/demand/reserves for oil/natgas/coal/nuclear/electricty. Thanks to BP for making this available. Other useful sources for energy are the OECD-funded IEA and US-funded EIA.) There may be some discrepancies between different sources but they should be very similar.

The following chart plots world oil consumption and demand (in barrels) for the last 40 years. As usual click on the image for a larger picture. 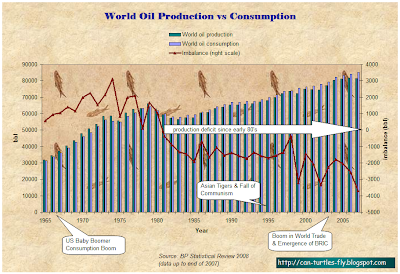 The bar charts represent demand and supply, while the solid line is the difference between the two. If the dark-red solid line is above zero, it means supply is greater than demand; and vice versa.

As you can see from the chart, apart for a few years in the early 80's, oil demand has been consistently rising. You will also note that production has kept up with demand for the most part.

According to these numbers, there has been a deficit since the early 80's.

The following chart plots the oil price (representing various benchmarks, with Brent crude being the latest) since 1861: 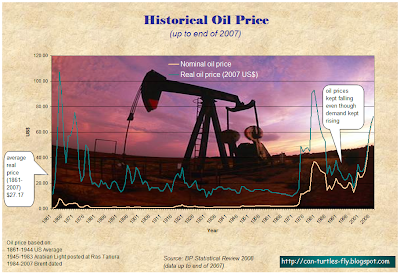 The tan line is the oil price in nominal terms while the teal line represent real price in 2007 US dollars. Unfortunately, the data doesn't capture 2008, which was a very important year because new highs in real and nominal terms were set last year.

I also want to point out that the (simple) average price of oil from 1861 to 2007 is $27.17 (in 2007 US$.) The price has been generally higher than the average in the last three decades but it's not clear if this is due to inflation issues or a change in fundamentals. Unless one believes the industry economics have permanently changed--a new era of a permanently high prices--a price near $28 is a good guess on the floor price of oil. Given how oil is a political commodity, it is influenced by OPEC (controls majority of cheap and high quality oil), America (controls House of Saud and influences world politics), Russia (owns huge swaths of potentially undiscovered oil resources and run by near-totalitarian government), and others, so the price can literally be "anything". However, a good guess for a low is around $28 in the long run.

The whole point of this post is to show how the price of oil kept falling all throughout the 80's and 90's even though supply/demand imbalance was bullish for oil. Flip back and forth between the two graphs and you'll see this to be the case. If someone just looked at production and supply, they would have been pretty sure that oil would never fall from around $25 in 1990, which is well off the bubbly peak in 1980, to around $8 in 1997. If you blindly bet on oil companies--say a macro bet where you buy two or three high-risk junior oil companies with actual production--you likely would have lost your shirt, and more. The oil bear market in the 90's, which started in the 80's, was so brutal that it almost (indirectly) bankrupted every single bank in Texas and severely hurt Alberta.

Although this is just one data point, it clearly illustrates how one can't bet on a commodity simply based on supply and demand. I am not arguing that one should not invest in oil or oil companies right now; I don't know. All I'm saying is that one needs to have a rough idea of whether oil is overvalued or not.

This applies to all commodities and other sectors as well. For instance, even if potash prices have fallen, you need to be sure that the current price does not imply overvaluation. Some commodity prices, including oil, are higher than at any point in the last 20 years (except during the bubbly peak near 1980. If you do invest at a higher price in the commodity, or the business (commodity businesses are heavily impacted by the underlying commodity price), you better be sure that the new era or 'this time it's different' argument actually has merit. You better be sure that it is indeed different this time. I'm sure the same was said about oil back in the 70's (otherwise it would haven't hit $36 ($93 in real terms) back in 1980.)

An unrelated point I want to make is that if you are stockpicker, bottom-up value investor, or even certain types of contrarian, you can still invest profitably in bear markets. In the case with oil, you can still make money even if the oil price goes down. The aforementioned investing strategies buy assets that are undervalued so you can still make money if the fundamentals are poor. Many do not know this but Martin Whitman's #1 investment of all time is Nabors Industries, which is an oil services company if I'm not mistaken. He supposedly invested in it when it was distressed in the early 90's, and when it was a terrible time for the oil&gas industry. Yet he ended up doing really well. I believe he invested in senior debt and seized control during bankruptcy so that's beyond small investors like me but it's still an idea. Someone who invested in Exxon before the merger with Mobil, or perhaps after the massive Valdez spill, would have done well as well.

But what I'm discussing here is completely different from making a macro-oriented bet on a commodity price. I think everyone should think about what they are doing:

Are you investing in an oil company on a thesis or trend (e.g. oil prices will be $125 because supply will go down for sure and demand from China will go up for sure)? In this case, you will likely lose your shirt if oil prices fall.

Or are you investing based on company-specific details (e.g. Suncor will perform well because, even though it's a high-cost oil sands producer, it has competitive advantages X, Y, Z, and can lower costs by doing A,B,C.) In this case, you may make money even if oil declines but you need to do fundamental analysis of the company in question.