Some articles for the week ending April 25 of 2009


Will this be the Worst Recession Since the War?


A New York Times article by Floyd Norris compares the current recession against those since the 60's using the coincident indicator. The following graphic summarizes the current state: 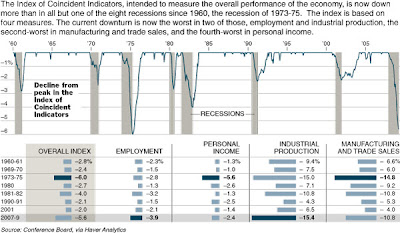 The question is will this be the worst? Generally the recession that started in 1973 is considered as the worst in the last few decades.

According to the graphic, the current recession is already the worst (since the 60's) based on employment and industrial production. It is possible that this may turn out to be the worst in terms of manufacturing and trade sales but I'm not sure if personal income will decline as much as in 1973-1975.

What is different about now, compared to all the other ones shown, is that we are genuinely facing a deflationary bust. Barring some hyperinflationists who dismiss deflation, we are in one of the rare periods where deflationary forces are stronger than the inflationary ones. In contrast, the two other severe recessions, 1973-1975 and 1981-1982, involved inflationary pressures. Right now, I personally don't think there is much inflationary pressure. In contrast, we have deflationary pressure all over the place—such as potential overcapacity in China; continuously available cheap labour force in developing countries; potentially still-unaccounted-for losses in commerical real estate, credit card loans, CLOs, corporate bonds; and so on. As a reminder, The Economist made the following comment about deflation this week:

The threat of deflation remains. German producer prices fell more quickly than expected in March. And the retail-price index in Britain fell by 0.4% year on year in March, its first drop since 1960.

Sure, the contraction in Britain, or the collaspe in Germany, or even in America, may be temporary. But it may also turn into something that lasts longer than the consensus expects.

I don't think many of us, either as citizens, investors, workers, management, or politicans, really know how to handle deflationary threats. That is what makes this episode more challenging in my eyes. This is also what makes the present investing world totally different from most of history.

The consensus—certainly in the last few months—and probably most readers of this blog probably don't share my concern for deflation. I suspect many are more worried about inflation. Even if that were the case, I do recommend that you keep an eye on deflation and perhaps read up on the Great Depression or Japan.

BusinessWeek has a very basic overview of the three bearish scenarios that can decimate investors' portfolios. There isn't much in the article but, since I lean more towards deflation, I found it interesting that Gary Shilling suggests that technology is an attractive area. This is the first time I have heard him say that (usually he suggests the long bond or cash.)

Although not as knowledgeable as Gary, I have also felt, for other reasons, that technology may be a good sector for the next decade. There are some obvious contrarian reasons for considering tech—such as the fact that many companies have been in a long bear market and have gone nowhere in the post-bubble period—but I also feel that many technology companies may handle deflationary periods better since they tend to operate in industries where end-user prices are continuously falling. Yet, I never considered what Gary has suggested here as a bullish reason for technology i.e. companies will consider technology purchases to increase productivity in a world where deflationary forces persist.

Gary's view makes a lot of sense, assuming we do end up in a slumping world with bouts of deflation everywhere. My, admittedly distant and ill-informed, impression of Japan, a country that is the classic case of modern deflation, is that it has endorsed technology in the last two decades to a greater degree than one would expect. Partly this is due to their culture; and partly it's because of their aging population. However, it is possible that it may also be driven by deflation. (Japanese stocks (even technology companies) haven't done too well but I believe that is due to poor corporate goverance, poor government policy, and severe overvaluation of stocks in the late 80's.)

Of course, even if one is bullish on tech, figuring out which companies actually improve productivity versus ones that don't, will not be easy. Gary Shilling mentioned semiconductors but that's an ugly industry with overcapacity and low profit margins. I'm thinking that the ideal one would be something that provides a tool or a service that clearly lowers the costs of the end product or of doing business. Anyway, this is a macro thesis for me to investigate and I'll keep everyone posted.


Some Thoughts on Mauldin's Essays

I agree with some of what Mauldin is saying but disagree with others. I share Mauldin's view that, contraray to the Austrian Economists' desire, 20%+ unemployment is far worse than 10% for a few years. Nevertheless, I think Mauldin is too critical of liberal policies while ignoring hundreads of billions thrown at the failing financial firms. This shouldn't be surprising, though, since Mauldin makes a living off hedge funds, institutional investors, and others who are dependent on these failing financial firms.

I think most of his description of what happened is correct. His description of the collapse of credit is how I, who isn't an economist, look at the world as well. This is also why I lean towards deflation more than inflation.

But although I have been critical of mark-to-market accounting, I think he puts too much emphasis on it. Some of the key implications, such as the impact of reduced consumption in USA on the rest of the world, is also not covered.

I am less concerned about inflation than Mauldin. However, there is a risk of high inflation if government chooses to pursue it. Mauldin suggests that the Democrats may replace Bernanke with someone who is more left-leaning and less of a fiscal conservative. That is a definite possibility that might shift the environment towards inflation. Recently it has also emerged that Ben Bernanke has made some questionable judgements in the Bank of America buyout of Merrill Lynch. He might be shown the door if this turns into a huge crisis and Obama isn't able to control it. It's too early but this could very well turn into a huge scandal. Henry Paulson seems to have shifted the blame onto Bernanke. I have been supportive of Bernanke in the past and think he is the ideal person to handle the current situation so I hope he is allowed to finish the job. Timothy Geithner may also come under attack if the Bank of America crisis isn't contained since he may have played a role at the New York Federal Reserve. The problem here is that the Federal Reserve and the US Treasury asked Ken Lewis, CEO of Bank of America, to do something to the save the country while hurting his own shareholders. It's not clear who is telling the truth but it seems to me that Ken Lewis almost bankrupted his $100+ billion company in order to follow orders from the Federal Reserve. It appears that Ken Lewis may have done something illegal by not disclosing material changes to shareholders. Whether this turns into a huge crisis will depend on what the SEC says and how the courts will rule on the likely shareholder lawsuits that will be filed. Interestingly, all this started with New York Attorney General, Andrew Cuomo, probing an unrelated issue relating to Merrill Lynch bonus payments, and it seems to have opened up a can of worms.

Going back to Mauldin, he thinks that Irving Fisher will win out in the end but my feeling—a possibly biased view :)— is that Keynes will probably win out. I have a feeling that theories and solutions of someone like Robert Shiller, who follows in the tradition of Keynes to some degree, will become the staple for the next few decades. In particular, Shiller's view of irrational behaviour driven by 'animal spirits', a concept originally popularized by Keynes, will likely gain great influence in economics. I suspect that psychology will be incorporated into mainstream economics that is taught and practiced. In the grand scheme of things, this makes a lot of sense to me because economics is a social science and hence shares more with psychology than the hard sciences or mathematics.