No, I'm not turning into a so-called anti-capitalist or an anarchist but I thought this pic captures the current state of affairs in London 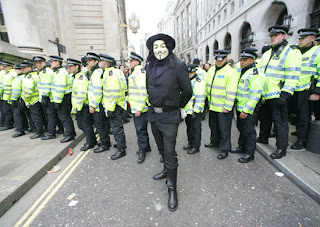 For those that don't get it, the masked protestor is dressed as Guy Fawkes, a controversial character that has remained popular in culture. Movie fans may have seen the rebel V being dressed as Guy Fawkes in V for Vendetta, the film dealing in an alternate dystopian world ruled by a totalitarian government.

I remember receiving an e-mail once from some reader who chose to never come to this site or read my writing after I blamed bankers and investors for being partly responsible for the whole financial crisis... not sure what anyone thinks after I post the above pic. I'm not endorsing anything that is happening over in London but thought it captures the essence of the situation. Just for the record, no, I haven't become an anarchist... at least not until the world is ruled by a totalitarian government ;)