December 21, 2008 energy
Crude oil is going to be a big story in 2009--for both investors as well as for the economy. I'm staying as far away from oil as possible but it is an interesting situation for investors.

One of the reasons the economy hasn't done as badly as some of the pessimistic forecasts from early in the year was because of the massive decline in crude oil. Calculated Risk estimates that the decline in oil provides around $20 billion per month in extra disposal income (compared to prior spending.) This is equivalent to almost 1/4 of the big stimulus package that is being proposed. If you add in the decline in other commodities, you can see how big of a stimulus this has provided in this recession.

The decline in oil (and other commodities) is, of course, bad for the oil industry (and related industries.) Roughly speaking, decline in oil is good for USA because it is a big user; but it is bad for the oil producers, whose economies are getting clobbered. One just needs to look at Russia and Brazil to see how the free market benefits some and hurts others. As for Canada, decline in oil is neutral in my opinion. Canada is a big producer of oil but almost half (or more) of the economy is manufacturing and services that are big users of oil. So it is a wash of sorts.

For investors, it has been a wild ride but the really volatile period could still be in front of them. So far oil has trended with it continuously going up for a while and then continuously declining of late. If I had to guess, I would say that oil will enter a volatile period where it goes up and down 20% every few months (this is similar to my view of the broad stock market as well.) Like most nasty bear markets, it is likely that both bears and bulls will either lose big or gain big (if they can time things properly.) Some investors are thinking of going long now and it's an interesting proposition.

From a contrarian point of view, if you are bullish, the analyst estimates are not in your favour. Analysts still seem to be too bullish as you can tell by the following chart from Bespoke Investment Group: 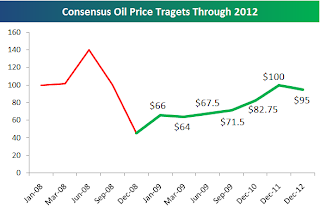 Analysts seem to think that oil will rebound to $60 by next year and hit $100 by 2011. The ideal contrarian position would be when analysts are bearish, as nearly all of them were 5 years ago, but it's too late for that. Oil, like most commodities, is very volatile and there is nothing to say it won't hit $60 but I find it unlikely. That's around a 100% gain from current levels and without a big macro bet, such as the China bet, it's hard to see anyone pushing up prices to that level.

If we leave the analysts, who always lag trends, and look at the market itself, we see the following futures curve, courtesy barchart.com: 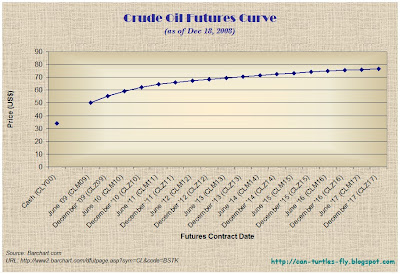 I only plotted a few months but you can get more data from barchart.com. Do keep in mind that a normal commodity market should be in contango (i.e. future price should be higher than current price to account for opportunity costs, storage costs, etc.) Right now, the futures prices are quite bullish, with a price in the $50's by next year, and $70 by 2013. Having said that, I don't think one should rely on the futures market very much.

There are a lot of people, including central bankers and other prominent individuals, who look at futures markets as some sort of predictor of the future. I am not in that camp. As far as I'm concerned, futures are almost next to useless and generally just extrapolate current views far into the future. If anyone looked at oil futures a few years ago you would have noticed that they were wildly off. Similarly, early this year, distant futures were pricing in very high prices (although if I recall, the futures price never hit the high spot prices around $147.)


So to sum up, it's easy for oil to rise significantly in a short period of time, but the market consensus is still too bullish in my eyes.