Opinion: Do the Flaws With Private Equity Need Fixing? 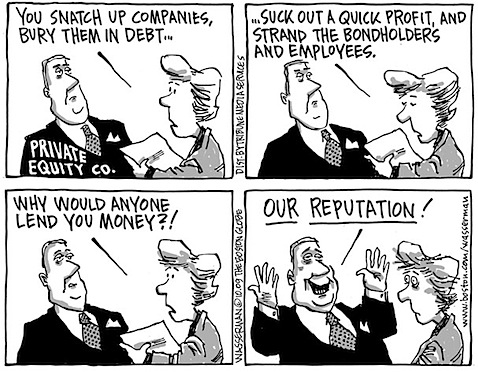 (Image by boston.com. Downloaded from jamieflinchbaugh.com)


In his latest for The New Yorker, James Surowiecki points out two major flaws with private equity as it currently operates. In particular, he raises the carried interest controversy and the notion that private equity uses debt to extract profits, while, at times, running the company into the ground. Should the government scrutinize how private equity is allowed to operate in America?

One criticism he raises is the 'carried interest' loophole, which allows private equity manager compensation to be taxed at the capital gains rate, rather than the higher, personal income rate. This has been debated to death but has been raised lately due to Mitt Romney's political campaign for presidency. In an opinion piece for The New York Times in 2007, Alan Blinder explained the problem with 'carried interest' and why it appears unfair:


They are normally compensated by the “2 and 20” formula, meaning that they earn 2 percent of assets plus 20 percent of the fund’s profits — the latter being called “carried interest,” or just “carry.” So, for example, a manager of a $2 billion fund that earns a 15 percent annual return collects a $40 million management fee, plus 20 percent of the fund’s $300 million profit, or another $60 million, in carry. The tax issue concerns the carry.

Suppose the whole $60 million consists of long-term capital gains. The tax bill is then 15 percent of $60 million, or $9 million. But if carry were considered earned income instead, the bill would be 35 percent in income taxes plus 2.9 percent in payroll taxes, for a total of $22.74 million. You can see why the industry loves its current tax treatment.

But is the low 15 percent tax rate justified? For better or, as I will argue shortly, worse, capital gains are taxed far more lightly than wages. Since carry stems mostly from capital gains, defenders of the status quo argue that it deserves the low tax rate. Critics, however, object that carry looks and feels like payments for managing money, that is, like earnings.

Who’s right? It’s true that carry is mostly derived from gains on capital — but it’s mostly someone else’s capital. Which is presumably why former Treasury Secretary Robert E. Rubin said at a conference last month, “I think what they’re doing is getting paid a fee for running other people’s money.”

Sounds right to me. This judgment does not dispute the fact that fund managers’ compensation is risky. But so are the incomes of movie actors, the royalties of authors and the prize winnings of golfers — none of which is treated as capital gains.

The thing I never understand about the private equity carried interest defenders is how they can argue that a manager should be paying capital gains taxes when they are using capital that doesn't belong to them. Mutual fund managers' pay isn't taxed at the capital gains tax rate, and neither are, as Blinder alludes to, movie actors or book authors. So how can anyone possibly defend the low tax rate for private equity managers?

As far as I'm concerned, this is an issue that needs fixing and the sooner America and others do it, the better. Private equity investments aren't as popular in other countries so this problem isn't as prevalent in other countries.

James Surowiecki also points out to a seemingly flawed outcome whereby private equity extracts profit by overloading companies with debt (bolds by me):

Having already piled companies high with debt in order to buy them, many private-equity funds had their companies borrow even more, and then used that money to pay themselves huge “special dividends.” This allowed them to recoup their initial investment while keeping the same ownership stake. Before 2000, big special dividends were not that common. But between 2003 and 2007 private-equity funds took more than seventy billion dollars out of their companies. These dividends created no economic value—they just redistributed money from the company to the private-equity investors.

As a result, private-equity firms are increasingly able to profit even if the companies they run go under—an outcome made much likelier by all the extra borrowing—and many companies have been getting picked clean. In 2004, for instance, Wasserstein & Company bought the thriving mail-order fruit retailer Harry and David. The following year, Wasserstein and other investors took out more than a hundred million in dividends, paid for with borrowed money—covering their original investment plus a twenty-three per cent profit—and charged Harry and David millions in “management fees.” Last year, Harry and David defaulted on its debt and dumped its pension obligations. In other words, Wasserstein failed to improve the company’s performance, failed to meet its obligations to creditors, screwed its workers, and still made a profit. That’s not exactly how capitalism is supposed to work.

I think it's important to raise this issue, but I don't think there is anything wrong with the system here. Yes, this is an undesirable outcome and we definitely don't want private equity issuing debt and extracting that money for themselves, and then letting the companies suffer. However, I think this situation is unusual and possibly an outlier.

After all, in a free market, why are the creditors lending to the private-equity-owned company if the company can't handle the debtload? I think the onus is on the creditors to price debt and lend as it seems fit. If they are making a mistake, it will get corrected eventually. This is especially true if government doesn't come and bail out the creditors (this is not what happened with the creditors who lent to the banks that invested in toxic assets, but is not common in other industries—some still argue the bailout of bank creditors was a mistake).

I admit that workers and the taxpayers (via the pension failures) are being hurt when companies are overloaded with debt, but that is a debt load mistake and can happen even without private equity involvement. Instead, the flaw here is occuring with the creditors who are willing to loan money to the private-equity-owned companies. Such mistakes by creditors, in my opinion, are part and parcel of capitalism and isn't a concern in the long-run.

I think the carried interest issue, whereby private equity managers pay a lower tax rate, is something that should be fixed. It is a big flaw in the system and punishes workers in other professions, and consequently distorts the free market.

On the other hand, the fact that some private equity firms overload their companies with debt and take out the money as "profit" and "service fees" is not a problem in the system. Rather, it is a mistake by creditors and if the free market is working properly, the market should punish the bondholders for making the mistake.