January 29, 2012 contrarian global
One of the biggest bubbles over the last decade was the shipping bubble. Driven by the trade boom with China and other emerging markets, large investments were made in ships. Companies mortgaged their future and purchased a large number of ships, with the assumption of good times continuing forever. Long-time readers may recall when I wondered about the industry (from a contrarian point of view) back in 2009 in this post and this one. Time flies but even then, it seems like the shipping industry is still working through its overcapacity problem. It's interesting to note that they are still having problems—this, without China entering any slump, yet. Marketwatch reports,


The warning signs being flashed by the collapsing Baltic Dry Index (BDI), a leading global economic indicator, may reflect the folly of misguided expectations during the prior global economic boom, according to Hong Kong-based shipping analysts.

New super-sized ships ordered up during the era of cheap credit and surging global trade could explain the index’s 57% plunge in the last three weeks, according to Macquarie Research, which described this month’s BDI drop as “relentless” and “extreme.”


***
Shipping companies appear to have jinxed their own industry by ordering up too many grand ships when conditions looked very favorable before 2008.

Meanwhile, further new capacity, equivalent to 22.7% of the existing fleet, is due to be delivered this year, according to Macquarie calculations.

The Baltic Dry Index (BDI) hit a low back in late-2008/early-2009 and I didn't think it would decline back to that level again, but it appears to have happened. The following chart from stockcharts.com illustrates how the BDI has collapsed lately. 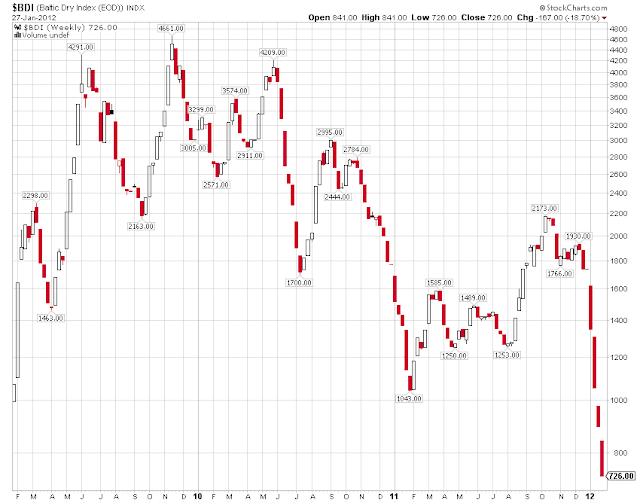 The index is very volatile but the move in the last month has been spectacular, with it down almost 70% within one month. From a long-term point of view, the index is approaching the multi-decade low set in 2009.

The following chart from InvestTools.com—yes, colours could be better—shows the long-term chart of BDI. The BDI line is blue one in the top chart while the others are moving averages.

I, as well as many others, place greater weight on BDI than many other measures because it is a commodity price index. That is, it is actually an index of shipping prices for dry goods (do note that there are other indexes that track the cost of shipping other items such as crude oil). If you are a free market guy like me, you tend to pay more attention to the price of goods or services set by the market than to security prices. It's kind of like comparing crude oil prices (commodity) to the share price of an oil company (security). The fact that shipping companies are seeing very low prices could mean one of two things.

There was a boom in shipbuilding and the price collapse may be due to severe overcapacity. As the Marketwatch article mentions, a large number of ships are to be delivered. This may account for the collapse in the BDI index. I'm sure this plays a big role but can it account for the entire collapse?

Another possibility, one that isn't covered much in the media, is the possibility of weakening global trade. There is the looming threat of a global economic slowdown due to problems in China and Europe. People always talk about that but I wonder if the BDI index may be detecting a real slowdown.

An Investment Worth Investigating?

Back in 2009, I wondered if the shipping companies were worth investigating from a contrarian point of view. I thought it was an area worth checking out but didn't feel they were attractive enough to invest. How about now?

The following is a chart of the Philadelphia Marine Shipping Index (SHX): 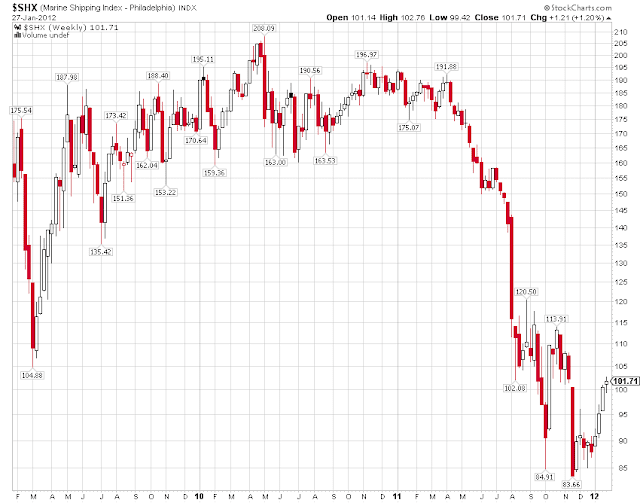 This index consists of leading shipping companies that trade on the US exchanges. It includes popular companies such as Frontline (FRO), Dryships (DRYS), Eagle Bulk Shipping (EGLE), and so on.

As you can see, the shares are off 50% in the last year. Interestingly, this index started falling in the middle of last year, whereas the BDI index started collapsing late last year. However, do keep in mind that the SHX index consists of shipping companies that are engaged in activities other than dry bulk shipping, and hence will be driven by other factors. The shipping companies also tend to pay out most of their income as dividends so there will be huge dividends that won't be captured properly on stock charts like the one above.

Back in 2009, I wrote how Mohnish Pabri, a value investor, successfully invested in a distressed shipping company, Frontline, but felt the situation at that time (2009) wasn't anywhere near what Pabri faced. Quoting my post from before,

There are some cases where value investors have invested in these companies. Mohnish Pabrai invested in Frontline 5 or so years ago. The shipping industry was, like now, struggling back then and Pabrai bet that Frontline will survive while others go bankrupt. I haven't read Pabrai's books so I'm not sure what gave him the confidence but I suspect it was the potential liquidation value. Right now, however, it would be extremely difficult to pull off the same tactic. Back then, the shipping companies weren't coming off a boom where thousands of ships entered the market.

I think the current situation, from a contrarian investment perspective, has improved since my comment from 3 years ago. I think the excess capacity is being worked off, and we are probably closer to a so-called "bottom" now. So, anyone interested in a contrarian bet on a distressed sector may want to look at these companies.

However, as I remarked in my post from a few years ago, the shipping companies are really more suited for macro investors or those making a largely contrarian bet, than value investors:


Sometimes people wonder how investments would differ between a macro investor and a value investor. Well, the shipping companies are a good example of investments that a macro investor would make but nearly all value investors would avoid (except in some special cases.) Shipping companies are good for macro investors because they are a pure-play bet on world trade, China, commodities, or whatever else one deems critical. The fact that they pay out most of their earnings right away means that you can realize profits easily. In contrast, if you bet on, say a copper mining company, it is possible that the company may waste profits (assuming your macro case is right) on buying out other companies, investing in dubious other schemes, and so on. In the latter case, the only way you can make money is if the market bids up the price of your stock.

A value investor would be hard pressed to buy these companies. Nearly all of them are commodity businesses that have zero pricing power. All it takes is for some dumb competitor to increase capacity (i.e. buy too many ships at the wrong time) and you can go bankrupt when the tide turns. These are also companies that likely have asset values that can decline precipitously right when you want to get rid of ships. When there is too much capacity, no one wants a ship--even at cheap prices (you literally have to scrap them.) In contrast, most other industries can recoup some value for their factories, equipment, or real estate even during recessions.

So, my feeling is that these aren't what a buy & hold, Buffett-Prime, investor would pursue. But, classic value investors, who are good at competitive industry analysis and determining liquidation value of companies, may contemplate them. Ultimately, though, these are contrarian investments.

Speaking as someone who still maintains his bearish stance on China and world trade in general—yes, a terrible call that has been wrong for years—I think the shipping situation could deteriorate further. There seems to be a cyclical bottom in the first quarter of every year, so the dry bulk prices may rise from here. But I don't have any confidence the situation is anywhere near being resolved. If you are interested in this industry, I would start tracking and study them but I wouldn't really plunge in without a good understanding of worst-case scenarios.