How Much of a Threat are Technology Companies to Netflix? How About UltraViolet?

January 11, 2012 media Netflix (NFLX) technology
You're using Internet Explorer 7, upgrade to a faster browser.
Show me how
I'm stuck using IE7, please don't show this again
Remind me later
One the claims by some Netflix bears is that technology companies like Microsoft and Apple will be a huge threat. Although things can change, technology companies are unlikely to compete successfully in fixed price video streaming services (they can, however, do fine in pay-for-download or pay-per-view digital content businesses). You get a feel for this with the following Reuters story via The Globe & Mail on Microsoft:

Microsoft Corp has put its talks with media companies about an online subscription service for TV shows and movies on hold, according to people familiar with the discussions.

The technology giant had been in intense talks with potential programming partners for over a year and was hoping to roll out the service in the next few months. But it pulled back after deciding that the licensing costs were too high for the business model Microsoft envisaged, according to these people.

“They built Microsoft TV, they demoed it for us, they asked for rate cards but then said ‘ooh ah, that’s expensive,’ ” said one senior media executive who had been involved in the talks.


I suspect this story will play out numerous times with other technology companies.


The reality is that, it is very expensive to purchase film and television streaming rights. As Reed Hastings has repeated several times, until someone is willing to spend, say, $1 billion, they are not even in the game. Microsoft is actually cash-flow positive and has low cost of capital yet it can't get into the streaming (or some sort of subscription) business. Even YouTube, with at least 100 million unique American viewers, and as much as 500 million global viewers, and backed by cash-rich Google, is unable or unwilling to ink anything totalling $1 billion per year (in the long run, unlike Microsoft or Apple or Amazon, I think YouTube will become a viable, highly profitable, Internet TV service).

As long as Netflix can maintain its subscriber based and earn around $2 billion in revenue—say 20 million subscribers x $8/month x 12 months—and spend as much as $1.3 billion on content every year, its moat is getting stronger and stronger. As recently as two years ago, you could have been in the streaming game with a spending level around $200 million per year. Right now, you need around $1 billion to compete against Netflix.

The number of potential competitors will decline if Netflix is able to raise its subscribers and pay more for content. Short-term-oriented investors, who appear to be the main shareholders of Netflix right now—just look at the ridiculous run-up in the stock in the last few weeks—will be concerned with near-term rising content costs. Yet, from a long-term perspective, as long as the company isn't wasting money, it is building a moat that will get harder and harder to penetrate. It's kind of like how Amazon's costs were rising in the early 2000's as it was building warehouses and building out the Internet infrastructure, but by mid-2000's, very few companies could afford to spend money to keep up. Netflix isn't building any physical infrastructure, but by raising the cost of content (while hopefully attracting and increasing customer loyalty), it blocks potential competitors from entering the business.

Ultraviolet is a system being rolled by a consortium of content creators, distributors and consumer device manufacturers. According to wikipedia,

UltraViolet (UV) is a digital rights authentication and cloud-based licensing system that allows consumers of digital home entertainment content to stream and download purchased content to multiple platforms and devices. UltraViolet adheres to a 'buy once, play anywhere' approach that allows users to store digital proof-of-purchases under one account to enable playback of content that is platform- and point-of-sale-agnostic.

UltraViolet is developed and deployed by the 70-plus members of the Digital Entertainment Content Ecosystem consortium, which includes film studios, retailers, consumer electronics manufacturers, cable companies, ISPs, network hosting vendors, and other Internet systems and security vendors. Apple including both iTunes and the various popular devices such as the iPad and iPhone do not support any integration with the UltraViolet platform at this time and Disney is developing its own competing Keychest format.

From the official site, here is a diagram of how it works: 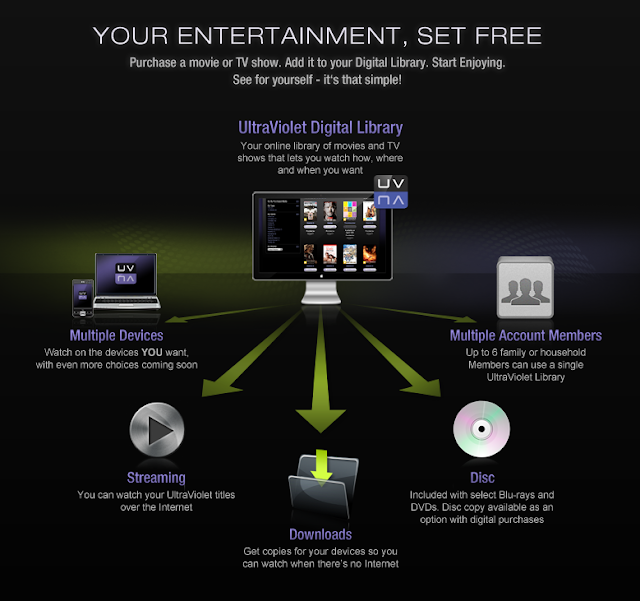 Basically, the UVVU (aka Ultraviolet) service allows you to purchase digital content and then share it with numerous supported devices. The interesting thing about Ultraviolet is that it lets you purchase from numerous retail locations while authenticating from one central source, and share it by either downloading it from the cloud or streaming it.

The streaming part is the area that might be an emerging threat to Netflix. It's too early to say how well the streaming aspect will work. There will be two issues.

First of all, everything will come down to price. Purchasing content is more expensive, and the studios would prefer that you do it. Streaming content via fixed-fee services like Netflix is cheap but the studios don't like it, which means Netflix will neither have as much content nor will it be new same-season releases. If Ultraviolet purchase remains somewhat expensive, it probably won't take off.

The second issue is the quality of streaming. Ultraviolet's cloud doesn't store the digital content and stream it to the customer. Instead, it appears that UVVU authenticates but the customer ultimately streams from the retail point of purchase (say, Amazon or Best Buy). So, the retailer has to provide the streaming infrastructure.

I suspect the fact that the streaming depends on the retailer probably gives an advantage to companies like Netflix. Although some customers complain about Netflix—mostly due to their connection by the ISP which has little to do with Netflix—it is generally thought by many that Netflix has superior streaming technology. It's doubtful that many online retailers, other than a select few like Amazon, will ever develop advanced streaming technology. For instance, from what little I know (I could be wrong), Netflix uses Amazon clould to a small degree, and, to a greater degree, uses content delivery networks (CDNs) from Akamai and Level 3 Networks. I'm not sure if an online retailer will be spending as much money as Netflix does on those CDNs.

So to sum up, Ultraviolet doesn't appear to be a big threat to Netflix (or similar competitors) at the present. However, if the price of content purchase declines materially—say $1 per film—then Netflix's business could be threatened.