Opinion: A parallel to the Great Depression & Other thoughts on Unemployment

August 10, 2010 economics opinion
One of the shocking things I encountered when reading up on the Great Depression was how wages actually went up. Yet, huge swaths of the population were unemployed and suffering. One of the things, perhaps the key one, that was driving that scenario was the fact that productivity gains were accruing to those who had jobs while those without jobs barely could find a decent job. Maybe I'm an egalitarian at heart—my egalitarian side and my capitalist side often fight deep inside me—but there's almost something cruel about that.

I hate to say it but a similar thing appears to have unfolding right now in America. The New York Times reports on the similarity to the Great Depression:


In the deep economic slump of the mid-1970s, the average hourly pay of rank-and-file workers — who make up four-fifths of the work force — fell 6 percent, adjusted for inflation. In the early 1980s, the average wage fell 3 percent. Even in the mild 1990-91 recession, it fell almost 2 percent.

But since this recent recession began in December 2007, real average hourly pay has risen nearly 5 percent. Some employers, especially state and local governments, have cut wages. But many more employers have continued to increase pay.

Something similar happened during the Great Depression, notes Bruce Judson of the Yale School of Management. Falling prices meant that workers who held their jobs received a surprisingly strong effective pay raise.

This time around, nominal wages — the numbers people see in their paychecks — have risen throughout the slump, as companies have passed along some of the impressive productivity to their (remaining) workers. Meanwhile, inflation has been almost non-existent, except for parts of last year, when real wages did briefly fall.

Stock market investors probably wouldn't be surprised by this observation since they would have seen their companies post strong profit growth, mostly by cutting labour. Nevertheless, when you sit back and think about it, it's pretty amazing—in a bad way!

As the writer, David Leonhardt at The New York Times, points out, real wages have fallen in all major recessions in the 70's, 80's and 90's. The only one that sticks out like a sore thumb is the Great Depression, when real wages rose. (I haven't looked at the numbers for the recessions in the 40's, 50's, and 60's, and am not sure if real wages rose but many, including me, do not consider any recession during those periods, except the 1948 one, to be significant.)

The current situation is starting to resemble the 30's.

Part of the problem is that America is going through a structural change. Again, it's very similar to the Great Depression. A lot of people don't know this, or wouldn't agree with me, but one of the reasons the Great Depression was terrible was because of the end of agriculture as a main industry in America. The economy was shedding huge numbers of agricultural workers (and others dependent on those industries) and, arguably, those who suffered the most were on the farms and not in the cities, which were becoming more manufacturing-oriented.

Similarly, we are witnessing the end of manufacturing in America. What produced all that wealth and made America wealthy will be no more in a decade.

The other cause of recent job losses has to do with the collapse of real estate and related industries. This, although employing a huge number of people, should be cyclical so I'm not too worried about it. It's bad for anyone caught up in it but it's no different than, say, the oil & gas industry laying off people after oil prices falls (and stays there.)

We don't know what's going to happen with the structural changes (namely, the loss of manufacturing jobs.) The author suggests that a highly educated workforce will be innovative, just like they were a hundread years ago. I have no idea if that's just wishful thinking or not, but I do agree with the author's conclusion (not quoted above): the current safety-nets are antiquated and America, and other developed countries, probably need to come up with something better. The government is spending billions on solving problems that are suited for a manufacturing age that is slowly leaving us, or at least those of us in developed countries.

Most people are starting to call it the Great Recesion but I'm still thinking the Long Recession, in light of the Long Depression of the late 1800's, may end up being a better description. In any case, some of you may have already seen this but the following chart from Calculated Risk shows how the present is unlike anything in the post-war period. 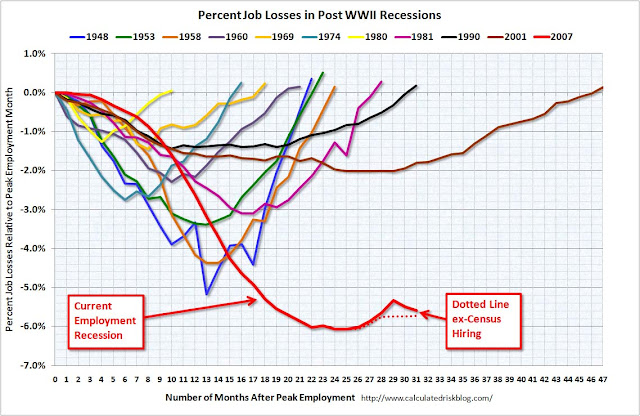 There are a lot of unemployment charts floating around and everyone has their favourite and I'm quite partial to this one. This one is quite unique in illustrating percent job loss from peak. Most people, though, appear to prefer charts showing actual number of jobs losses (in millions), unemployment rate, or year-over-year change in employment.

You can see how much worse this recession has been, at least in terms of job losses, compared to anything since the 30's. All this with massive fiscal stimuls and huge monetary stimulus! Imagine if the government and the central bank didn't funnel so much money into the economy.

Although not shown on the chart, the current situation, as bad as it is, is nowhere near the job losses during the Great Depression. That line would be off the chart.

An interesting behaviour about the recent recessions, this one and the one in 2001, is how they seem to just drag on. Even the 2001 recession, which was mild and primarily impacted select industries such as the computer and Internet industries, took a long time to recover. In fact, many call the 2001 recover a 'jobless recovery.'

We may be seeing these slow, drag-on, recoveries due to the structural change in the economy (i.e. end of manufacturing.) At least that's my guess. Whatever the cause, the nature of these recoveries lends credence to my view that the Long Recession may be a more appropriate description.