From her leafy, 11th-floor rooftop terrace at the headquarters of Soho China Ltd., billionaire Zhang Xin scans the relentlessly expanding Beijing skyline she helped create. Zhang’s avant-garde buildings -- some sleek as chopsticks, others stepped like rice terraces -- became part of the hottest real estate market on Earth in 2010.

Zhang says she’s well aware of the chorus of investors and economists who predict that China’s property boom is about to go bust, taking the global economy down with it. The doomsday scenarios don’t intimidate Zhang, a onetime penniless sweatshop worker who ascended to Wall Street by defying the odds. She hopes to prove skeptics wrong again this year by betting hundreds of millions of dollars on new buildings in Beijing and Shanghai, Bloomberg Markets magazine reports in its September issue.

“I don’t see any bubbles,” says Zhang, dressed in a white V-neck zippered top, black slacks and red heels. “The next few months will be a fantastic time to buy.”

Bloomberg Markets magazine has a nice profile of Zhang Xin, arguably the most successful real estate developer in China, which dovetails nicely into the theme on the minds of many macro-oriented investors. Namely, is there a real estate bubble in China?

The article does a good job of presenting the views of some bears and bulls and I thought I would quote some of their views. Anyone interested in this story should definitely read the full article.


“This is a serious bubble,” Xie says. “The alarm bells are ringing.”

That's Andy Xie for anyone not familiar. He has a habit of saying controversial things and is often wrong, at least initially, with his views.


Kenneth Rogoff, a Harvard University professor and co- author of “This Time Is Different,” (Princeton University Press, 2009), a book that examines financial crises during the past 800 years, already sees signs of turmoil in China’s housing market.

“Property prices are starting to collapse,” he says.

Economists aren't generally very good investors but I do find some of them to be pretty prescient when it comes to macro calls (Robert Shiller's and Paul Krugman's correct real estate bubble calls from 5 years ago comes to mind; I also remember Stephen Roach warning about global imbalances several years ago when no one cared about that topic.)


Sell side analysts aren't generally known for making correct calls on bubbles (usually because they profit from them and don't like to harm their business) but two analysts come out with a bearish call:


Barclays Capital and Standard Chartered Plc analysts forecast a falloff of as much as 30 percent in China’s big cities in the second half of 2010 compared with those of mid- April.

Since Mark Mobius' fund seems like the largest investor in Soho China (HK: 0410) I put him in the bull camp:


“They focus on sectors which hold long-term promise,” says Mark Mobius, Singapore-based executive chairman of Templeton Asset Management Ltd., which is Soho China’s largest institutional investor, with a 4 percent stake, according to data compiled by Bloomberg. “They have high sensitivity and a great sense of style.”

It's not clear what Mobius' view is regarding Chinese real estate but I suspect he is bullish since he owns such a big stake.


Zhang is now expanding her empire again, dismissing the China bears. In June, she paid 2.25 billion yuan for a 22,500- square-meter plot of vacant land on the Bund, Shanghai’s stately colonial-era waterfront strip, where buildings resemble those of 19th-century Europe. Two weeks later in Beijing, she started marketing a futuristic 485,000-square-meter commercial, retail and entertainment complex that’s shaped like interlinked cocoons.


As housing prices fall, bad loans will surge and hurt the state-owned banks, says Michael Pettis, a professor of finance at Peking University. “I would stay clear of property developers and banks,” says Marc Faber, who oversees $300 million at his own firm and has managed money in Hong Kong for the past 37 years.

Back to the first bear:

Now called the Exchange-Soho, the development is a prime example of the real estate bubble in China, economist Xie says. Soho China paid Morgan Stanley 2.45 billion yuan for the building -- the equivalent of 34,000 yuan per square meter. In the first quarter of 2010, Zhang says, she was selling office space in the building for an average 61,500 yuan per square meter, almost doubling her money. That works out to $843 per square foot -- more than twice the $381 per square foot that HSBC made when it sold its New York headquarters on Fifth Ave. in October.

“It’s a micro bubble, not a macro bubble,” he says.

Roach says the drop in the high-end market will slow economic growth, which he estimates will fall to between 8 percent and 9 percent by the end of the year.

“This would be a much more sustainable growth rate for China -- especially in light of the recent uptick in inflation,” he says. Inflation reached 3.1 percent in May, the fastest growth in 19 months, before falling back to 2.9 percent in June.

For what it's worth, the stock market is in Zhang's corner. Share price of Soho is up for the year while the Hong Kong index, as well most of the other world indices, are down for the year. 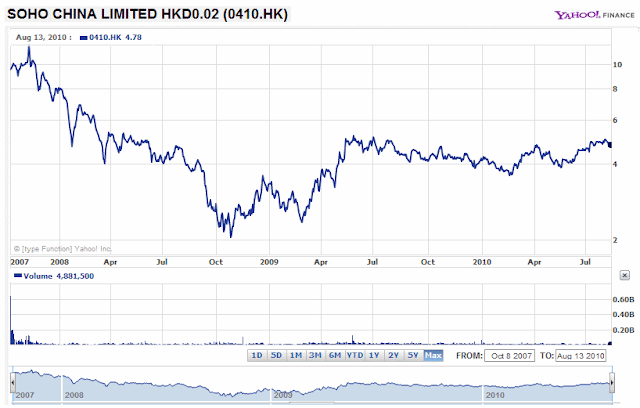 Remains to be seen what comes of all this...