August 14, 2010 investment strategy Newbie Thoughts
I ran across a report illustrating the returns that accrues to investors after all expenses, taxes, etc have been paid and I thought some of you may, especially those who are new to investing, may find it useful. The report is by Thornburg Investment Management—I thought Thornburg, which dealth with prime real estate mortages, went bust but looks like this survived—and was brought to my attention by Morningstar.

The following chart, excerpted from the Thornburg report, illustrates what remains after taking out various expenses. It covers the period from 1979 to 2009. As usual on my blog, click on the image for a larger picture (sometimes not available.) 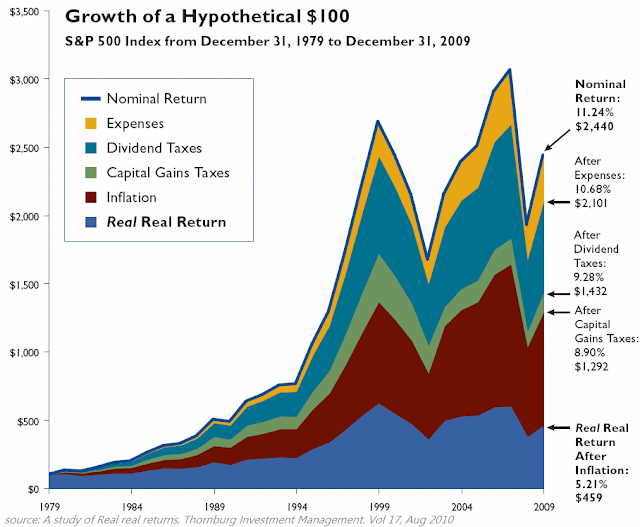 As always, it's important to keep in mind that there are long macroeconomic shifts that cause results to differ over time. In this case, the period covers the 30 years from 1979 to 2009 and my guess is that inflation may be lower in the next decade or two. The chart above also displays the S&P 500 and hence may or may not be representative of other asset classes or foreign markets.

As one can see from the chart, a nominal annual return of 11.24% ends up being 8.9% after taxes and expenses. Most of the taxes come from dividend taxes but the amount can vary over the long run, depending on whether capital gains or dividends are contributing to most of the returns.

The biggest "outlay" goes to inflation, which causes the final return an investor sees during their life to 5.21%. Technically you won't see the return you see on your account statement reduced by the amount of inflation. However, inflation is very important and everyone should factor that into their forward-looking expectations.

The returns over the last 30 years have been spectacular—even with the last decade included. I have to look up the numbers but it isn't common to see stocks posting more than 10% nominal and 5% real over a 30 year period. I think the returns over the future 30 years won't come anywhere near the current numbers (except possibly a short-lived return near the peak of any future bubble.)

Looking at the actual returns of different asset categories is interesting and shows why people are macro investors. The following chart from the aforementioned report shows some of the popular assets and their actual returns. 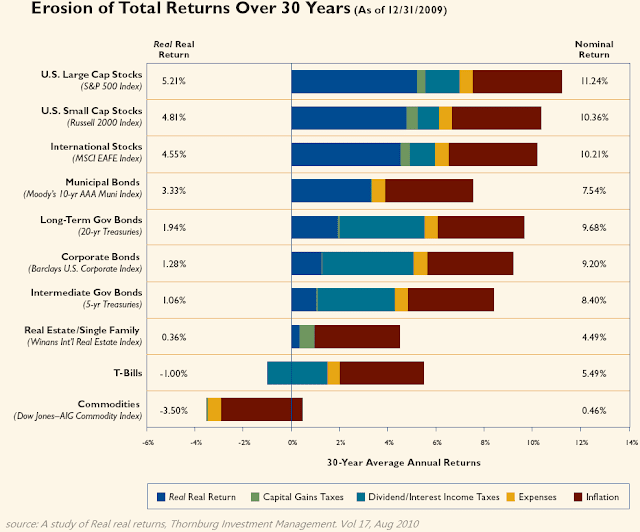 Again, I must emphasize that the numbers may differ based on the time period. There may be trends that can make particular assets look good or bad. There are quite a few assets impacted by macro trends IMO.

The chart above shows how the outlays can vary significantly based on the asset. The first line, for S&P 500, is the same chart that was plotted in the prior section. The interesting part relate to bonds.

You'll notice that nominal return of municipal bonds is lower than long-term US government bonds, corporate bonds, and medium-term US bonds, yet its actual return that accrues to investors is higher than the other three. In America, you don't pay taxes on municipal bonds and that makes a huge difference for taxable investors. Muni bonds may or may not be a good investment going forward (since there is a huge cloud of uncertainty over many municipalities and their solvency) but they have been great in the past.

Another interesting observation is that US long-term Treasuries have actually beaten corporate bonds in the last 30 years. I kind of knew this already but it's still impressive when one thinks about it. After all, Treasuries have much lower default risk yet they have beaten corporates. Having said that, all bonds have been riding a massive bull market in bonds and I would be cautious investing in any bonds (unless you are making a macro bet or something.) It's quite possible that the bull market in bonds may end in 5 to 10 years. My feeling is that it will end once we work through the deflationary problems. The government bond bull market would have probably ended near the late-1930's if it weren't for the war and I think a similar thing will happen now i.e. end around 5 to10 years after initial bust, which occurred in 2000.

This is well-known by investors but you'll also notice that the actual returns that accrue to stock market investors is far higher than what accures to bond investors. The tax on interest income from bonds pretty much wipes out most of the gains while that isn't so for stock investors (who pay capital gains or dividend taxes.) For instance, the International EAFE index started with a nominal return of 10.21% and ended up with an actual return of 4.55%; while the long-term US Treasury had a nominal return of 9.68% and a final, actual, return of only 1.94%. That is a huge difference!

The actual return on cash (i.e. T-bills) ends up being -1% and needless to say, not recommended for long-term investors. I'm surprised T-bills had a nominal yield of 5.49% over the last 30 years. I think we'll be lucky if we end up with a nominal return of even 3% over the next decade.

An asset favoured by some, commodities, ends up the worst on the list with a disastrous annual actual return of -3.5% over 30 years, while the nominal return was 0.46%. For all intensive purposes, anyone buying and holding commodities ended up bankrupt if you adjust for inflation; if you ignore inflation you still ended up with a fragment of your original investment.

Now, I am more into macro investing and macro investors love assets like commodities. The reason is because they go through long cycles and various "themes" (e.g. commodity supercycle thesis, China-to-da-moon, Oil-to-US$200, no-more-uranium-left, water-is-the-next-big-thing, etc.) Commodities show a terrible record because they were wildly overvalued in the late 70's and early 80's. People who are traders, macro investors, can time the market well, etc, do fairly well with commodities. Everyone else, though, should stay away from commodities.

The ironic thing about commodities is that many treat them as inflation hedges but they actually posted a negative real return because inflation was around 3% for 30 years. It just goes to show how popular views don't matter and the only thing that matters is price. Anyone who overloaded on commodities in the early 2000's is rich; anyone going heavily into them in 2007 or 2008 probably wishes they never even heard of them.

A key asset, gold, is unfortunately not shown on the chart. Gold typically holds its purchasing power but I think it would have posted around -1% to 0% actual annual return during the last 30 years since it was wildly overvalued in 1979/1980.

It's kind of complicated when you are actually making individual investments but one should always think about the actual return that will accrue to them. Generally speaking, stocks are better than bonds because tax rates are lower. Companies that do not pay dividends tend to be better than those that do (assuming the two companies are somewhat similar) because capital gains taxes tend to be lower. Furthermore, some assets may be more attractive to taxable investors than non-taxable investors (e.g. 401K, RRSP, etc investors.)

I have a habit of making predictions and ending up completely wrong so take this for what it's worth but going forward, I think US corporate bonds will probably beat government bonds—this goes counter to the chart data of the last 30 years. Some prominent investors are forecasting fairly high returns for US large-cap stocks whereas I haven't formed my opinion on which style and market-cap size will do well. If we end up in a deflationary slump of sorts, I think growth stocks will do better than so-called value stocks. As for commodities, I maintain my bearish view and would be really careful.