Innovative ideas are rare... Is that really so?

July 26, 2009 Malcolm Gladwell Miscellaneous
(This post has nothing to do with investing; if you are interested in science, do check out the fascinating essay.) 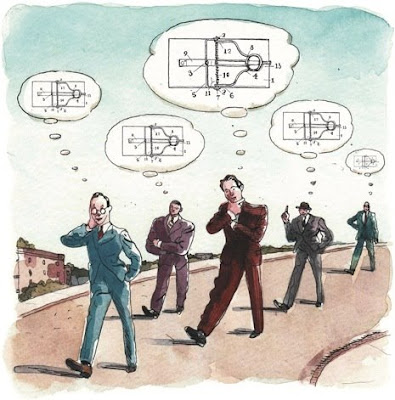 (Illustration by Barry Blitt for The New Yorker)
In mid-2008, writing for The New Yorker, Malcolm Gladwell, arguably one of the top writers in America, wrote an essay that questioned the commonly held view that innovation is rare. Titled In the Air, it is a fascinating piece that, as is usually the case with any of his works, happens to be provocative and somewhat controversial. Skeptics of Gladwell always accuse him of extrapolating small observations into large, all-encompassing, hypotheses. I am a big fan of Gladwell—I actually haven't read any of his books yet; I find his essasys in The New Yorker or other publications to be more interesting—and admit that Gladwell has a habit of painting with a broad brush. What I love about his writing is how he turns over stones and shines the light on seemingly minor issues that society ignores. He tries to connect the dots in ways that others simply don't even think about. So, whether one agrees with his final opinion or not, I find that one can learn quite a bit in the journey that he charters us on.

The main subject of In the Air is innovation and scientific discoveries. I, like the rest of the population, had always felt that innovation and scientific discoveries were rare. But is that really so? Malcolm Gladwell goes on a fascinating journey, starting with dinosaur hunters in Montana to the invention of the telephone, and concludes that scientific advances are far less rare than they appear. We, as a society, bestow great fame, and sometimes fortune, on the the inventors of new technology—Alexander Bell and the telephone for instance—but Gladwell almost argues that many technologies would have been developed eventually. He argues that as great a scientist or inventor as one may be, it is not quite like a unique artist.

People weren’t finding dinosaur bones, and they assumed that it was because they were rare. But—and almost everything that Myhrvold has been up to during the past half decade follows from this fact—it was our fault. We didn’t look hard enough.

Myhrvold gave the skeleton to the Smithsonian. It’s called the N. rex. “Our expeditions have found more T. rex than anyone else in the world,” Myhrvold said. “From 1909 to 1999, the world found eighteen T. rex specimens. From 1999 until now, we’ve found nine more.”

This phenomenon of simultaneous discovery—what science historians call “multiples”—turns out to be extremely common. One of the first comprehensive lists of multiples was put together by William Ogburn and Dorothy Thomas, in 1922, and they found a hundred and forty-eight major scientific discoveries that fit the multiple pattern. Newton and Leibniz both discovered calculus. Charles Darwin and Alfred Russel Wallace both discovered evolution. Three mathematicians “invented” decimal fractions. Oxygen was discovered by Joseph Priestley, in Wiltshire, in 1774, and by Carl Wilhelm Scheele, in Uppsala, a year earlier. Color photography was invented at the same time by Charles Cros and by Louis Ducos du Hauron, in France. Logarithms were invented by John Napier and Henry Briggs in Britain, and by Joost Bürgi in Switzerland.

“There were four independent discoveries of sunspots, all in 1611; namely, by Galileo in Italy, Scheiner in Germany, Fabricius in Holland and Harriott in England,” Ogburn and Thomas note...

For Ogburn and Thomas, the sheer number of multiples could mean only one thing: scientific discoveries must, in some sense, be inevitable. They must be in the air, products of the intellectual climate of a specific time and place.

You can’t pool the talents of a dozen Salieris and get Mozart’s Requiem. You can’t put together a committee of really talented art students and get Matisse’s “La Danse.” A work of artistic genius is singular, and all the arguments over calculus, the accusations back and forth between the Bell and the Gray camps, and our persistent inability to come to terms with the existence of multiples are the result of our misplaced desire to impose the paradigm of artistic invention on a world where it doesn’t belong. Shakespeare owned Hamlet because he created him, as none other before or since could. Alexander Graham Bell owned the telephone only because his patent application landed on the examiner’s desk a few hours before Gray’s. The first kind of creation was sui generis; the second could be re-created in a warehouse outside Seattle.