What were the housing bubble areas in the US?

November 12, 2008 real estate
Want to know which parts of the US had a housing bubble? Well, one needs to look no further than the percent of homes underwater: 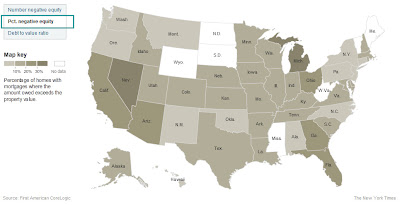 The above chart from The New York Times (accompanying article here) plots the percentage negative equity. The bubble areas had high speculation (Nevada for example) and/or homes being bought by people who clearly couldn't afford to. So those individuals (speculators/investors and those who were nowhere near the affordability point) have already defaulted or given up. Such areas would show up as large price declines (because the high price was an unsustainble "bogus" price.) Although this isn't a perfect measure of a bubble, my feeling is that it is a good estimate. The usual suspects--coastal areas, California, Nevada, Florida--shows up in darker shades that is indicative of a higher percentage of homes that are underwater.

I see some people assuming that a house is not worth paying for if the debt is greater than the equity value but that is not really true in my opinion. If you think of houses as investments--strictly speaking they are consumption goods, not investment, but in practice they are close to productive investments--what matters is the intrinsic value of the home. Just like with stocks, it is quite possible for the quoted value to be lower than the intrinsic value. If you are a long-term investor or a value investor, what matters is the intrinsic value of the home. If you are pretty confident that your house is worth $300,000 but the market is quoting a price of $250,000, it doesn't mean that you should sell out at $250,000. Similarly, this is why many borrowers would still be willing to pay off the full debt even if the house value seems to be lower than the debt. One should also keep in mind that, unlike a bond where one simply cares about the monetary value, a house's intrinsic value may include asthetic or lifestyle elements that are hard to duplicate. For example, if someone is paying down a house in a location close to work in a highly populated area (say in the city), it may be difficult to similar house.

I'm not saying there won't be big losses in real estate but, those extrapolating he negative equity into the future with the assumption that everyone will walk may end up being completely wrong.