Largest US Bankruptcy On Tap

November 20, 2008 commentary
It looks like the US government will not be bailing out GM. Republicans are strongly against any bailout and they have blocking power in the Senate. As for my opinion, I think a successful bailout is nearly impossible so any money spent directly on the automakers will be wasted. I would prefer if the government helped the workers with re-training, unemployment, welfare, and similar programs.

My guess is that GM will declare bankruptcy and the other two will follow suit a bit afterwards. Chrysler is rumoured to be in the worst state (it's private so we don't have access to their financials) and should go down first but it likely won't. Since Chrysler is controlled by Cerberus, they would not want to lose their multi-billion dollar investment and will play hard against the bondholders, UAW, and others. Whereas GM probably doesn't care too much about its public shareholders right now. Ford will probably declare bankrupty in 6 months to 2 years from now. It looks to be able to survive but if GM re-emerges from bankruptcy with lower production costs, Ford will get killed. If GM can easily take away most of the market share in Ford's strong areas: trucks and SUVs. 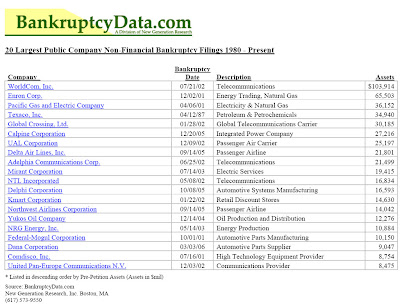 GM had total assets of $136 billion in June and, assuming assets at bankruptcy is similar, it would be much greater than Worldcom. GM has negative book value so I'm not really sure how this plays into reported assets upon bankruptcy.

(On another note, GMAC is converting to a bank and this should help it significantly. Martin Whitman took positions in GMAC bonds and, with borrowings from the government at low rates, it is unlikely that GMAC will default any time soon.)