September 26, 2007 insightful Louis-Vincent Gave
In my opinion, the best articles to read are those that (i) challenge your view, or (ii) look at the world from a unique point of view. I am always impressed by the thoughts emanating from Louis-Vincent Gave, Charles Gave, and Anatole Kaletsky of GaveKal. The fact that these ex-European (whatever that means :) ) are located in Hong Kong gives us a fresh perspective to those of us in Canada or USA. Unfortunately for small investors like me, it's hard to get free information from outfits like GaveKal.

John Mauldin, who also writes interesting articles, has posted GaveKal's latest commmentary on his website (you can also subscribe to John's free commentary). This article, titled Do Not Forget About Changes in Velocity, is very timely and one of the most interesting I have read in the last few months.

GaveKal basically questions whether a credit contraction can still occur. Right now, the market is pricing things as if there is an inflationary boom in front of us. One just needs to look at sectors that benefit from inflation, such as commodities and gold, in the last few weeks. Gold, for instance, has been on a tear but are these investors right? GaveKal isn't predicting anything just yet but they point out that any decline in the velocity of money is non-inflationary even if central banks print money.

The article also goes on to talk about how the Federal Reserve has done a pretty good job in the last 30 years or so, how China is facing some big problems, and what can derail the oil bull scenario. I'll quote some things I found insightful.

(all edits (bold, italics, etc) are mine)

Velocity of Money May Decline

...let us offer up a mistake that we made in the past and which, we fear, a number of people are making again today: forgetting that the velocity of money is not a constant...

Following the recent central bank actions in the US, Europe and the UK, most commentators seem to expect a sharp acceleration of either inflation, economic activity, or asset prices (or all three). As a result, gold is making new highs, the US$ is plunging to new depths, etc.... But aren't the recent buyers of gold focusing solely on likely changes in the money supply (M), while forgetting why central banks are set to dump money into the system in the first place? Isn't the reason behind the loosening of monetary policies the fact that the velocity of money (V) has been plummeting?

The crux of the problem is essentialy whether the velocity of money will continuously decline? As GaveKal points out, this is what happened in 2001-2003.

As in 2001, the question investors should thus ask themselves is whether velocity is set to rebound? If it is, then investors are right to position themselves for an ample liquidity environment (long gold, long commodities, long deep cyclicals). But if it isn't, then the investment environment could start getting a lot trickier.

It's pretty obvious that cyclicals and commodities will do well if there is inflation. The commodity bulls are still going heavily into that area but I think there is massive risk right now. Unlike 2004, the so-called fundamental arguments are already priced into the securities in my opinion (practically everyone has heard that oil is in short supply, that few major gold discoveries have been made, etc). The main thing that is driving prices right now in my opinion is speculation. Right now the speculation rests mainly on the liquidity view. I think the Federal Reserve may have initiated an easing cycle so rates may keep declining. But as GaveKal points out, if velocity declines, you can still see asset price declines.


The Crux of China's Problem

If anyone wants to know why China is facing the problems it is, the following words pretty much sum them up:

As we never tire of pointing out, there are three things that a central bank can control: the growth rate of its money supply, its interest rate, or the value of its currency. Unfortunately, as the Chinese central bankers are now discovering, it cannot control all three at the same time.

I think China is going to be the next big economic power but it is going to face a whole hoard of issues in the near future. My belief is that there are bubbles in manufacturing, real estate, and stocks, in China. It is going to be difficult to prevent a massive deflationary collapse in some of these sectors.

And with the Fed now engaged in a new easing cycle, which the PBoC simply cannot afford to follow, it is rapidly becoming crunch time for the RMB. Either the RMB will have to rise a lot in the near future, or the Chinese authorities will have to find some clever way of exporting massive amounts of excess capital. Either way, it is pretty good news for our favourite market: Hong Kong.

GaveKal is very bullish on Hong Kong but I'm not confident that HK will do well if there are sell-offs elsewhere in the world. If you look at the chart of the HK, China, and S&P 500 ETFs during the correction in August, HK actually gave up nearly all its gains. 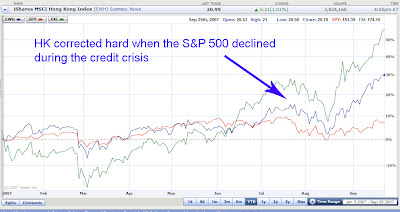 I think the same thing may happen regardless of what China does. I think a worldwide sell-off will reduce the capital flow into China. That alone should take some pressure off China, although they still won't be able to escape their monetary policy problems.

Here is a very good radio interview of Louis-Vincent Gave by Jim Puplava of Financialsense.com (download the MP3 version and listen to it when you have some free time).

A lot of what is mentioned is different from conventional thinking. For example, Louis-Vincent Gave has been one of those who downplay the impact of the US current account deficit. He also points out how service industry is superior to the manufacturing industry, just like how manufacturing is superior to the agricultural industry. A lot of people criticize the fact that USA, Canada, and others, have been losing their manufacturing industries but these individuals rarely have any evidence to show that it is indeed the case. I don't have time to transcribe some of the key points so you'll have to check out the audio interview if these topics sound useful to you.