5-Year Industry Performance and My Ideas

If you are looking at 10-year underperformance, you need to be really careful with industries that are becoming obsolete and possibly on their way to a zero. Something like the newspaper industry is a good example of one that has done horribly over 10 years. Having said that, if you are into deep-value investing, distressed investing, or something along those lines, 10 year lows are a good place to look.

Given how the current bull market has lasted almost 8 years--2009 to almost 2017--I think 3 to 5 years is a good time period to look. Depending on what you are trying to do, you don't want to use starting points at the trough of a bear market or a peak of a bull market (for instance, I would avoid any period that started in 2008 or 2009).

In the past, I often looked at the 5-year top and bottom industry performers from the WSJ website. This uses the Dow Jones industry classification and I had no specific reason for using it other than the fact that it was freely available and detailed. You can use alternate indexes and time periods as you see fit. The data can be influenced by the starting point so you should just use this as a rough guide to what has risen and fallen. Here are the best & worst 5 year performers (figures are cumulative % return): 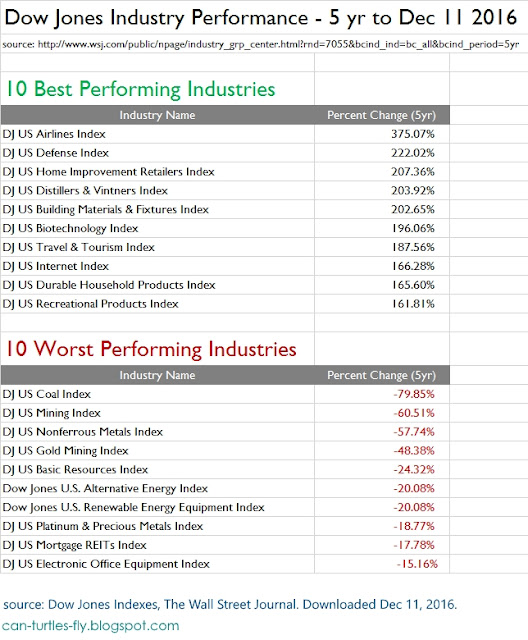 The airlines index has done the best over 5 years (375% over 5 years, which is 60-70% per year), which makes me wonder if those betting on airlines recently, like Mohnish Pabri and one of the investment managers (not Warren Buffett) at Berkshire Hathaway, are picking stocks near a peak. Airlines (at least in America) have gone through some major changes (due to M&A that has significantly reduced the number of major airlines, limited availability of gate slots at airports, ability to charge more fees such as fuel surcharge or checked luggage) so it's hard to say if they have entered a long-term outperformance phase. If you are a contrarian, I would avoid airlines unless specific stocks are attractive for some reason.

Because the US economy has been growing over the last 5 years--not great but not terrible like some European countries either--so consumer disposable spending has been good. So, it shouldn't be a surprise to see that some of the best performing industries are airlines, distillers/vinters, travel/tourism, recreational products, and durable goods industries (such as building materials & fixtures and durable household products). We will probably have a US recession within a few years and these industries will likely get hit hard. So, you should invest carefully in these industries right now.

Just because something has run up a lot doesn't mean it is less attractive, especially if it is a growth industry. For instance, in the above list, biotechnology and internet has done really well in 5 years but I wouldn't necessarily be as bearish as the durable goods ones or leisure ones. Biotechnology and internet has long-term secular growth so they will likely post strong results for the next 10 years. However, these two industries tend to have high valuations so you need to be careful that you buy at reasonable valuation.

Worst index over 5 years is the coal index and regardless of what Trump administration does, it probably won't change the long-term outcome for these companies. Even if Trump makes things favourable for coal, there is no guarantee someone else won't penalize them in another 4 years or whatever. Distressed investors, especially debt investors, might do well but otherwise, the coal industry is really a minefield.

The commodity supercycle has burst and needless to say, most of the worst performing sectors are related to commodities. I was bullish on commodities many years ago but then turned bearish, admittedly way too early, so the collapse in the commodity complex is not surprising to me. Even now, I think oil prices will likely fall further since (i) they are being kept artificially high by OPEC (and I get the impression that the cartel is slowly losing its relevance) and (ii) we haven't seen a recession in USA for over 8 years and haven't seen any correction in China (I still remain bearish on China).

With all that in mind, as a contrarian, I think the commodity complex is worth looking at and I took a brief look but didn't like anything I saw. The big problem I see is that there is overcapacity in most of the commodities. Many base metals are forecast to have increasing production, even as prices fall, since many big mines started construction during the boom years and are just about to enter production. Similarly, the amount of oil that can be produced is huge. I remember arguing against Peak Oil theorists many years ago and it is clearly evident now that there is no such thing. If anything, supply of oil is not constrained at all (except the cost limits the possibilities). This also extends to related businesses such as shipping (you wouldn't believe how many ships have been ordered and yet to enter the industry).

Finally, many commodity-related companies are overleveraged since they took on a lot of debt when times were good (it's easy to borrow money when you are making a lot during boom times). Many mining, shipping and oil & gas companies also have high operating leverage (since fixed costs are high). So, you have a situation where many companies have high operating leverage and high financial leverage on top of that, so many of these companies are super-leveraged. Even a small change in commodity price has massive impact on the net worth of the firm. For example, Freeport McMoran (FCX), one of the largest copper producers in the world, has seen its share price fall to $4 early this year but then rally to $15 now, with its market cap going from around $4 billion to $22 billion with very little going on. If you think about how hard it is to create $15 billion in wealth or how many companies even hit that valuation, you will see how crazy this is. But extreme leverage cuts both ways and you could lose everything very quickly as well.

One "commodity" that is an exception is gold. According to the table above, it looks like gold mining index has dropped about 50% in 5 years. I don't think of gold as a commodity, and instead treat it as a quasi-currency. Supply & demand has very little impact on the gold price. Gold is not consumed and nearly all that was produced is still available, and the amount of supply mined in one year is small compared to total gold. Contrary to what some people think, gold is also not correlated directly to inflation. In my opinion, gold is mostly influenced by the value of US$ and the market's confidence in it. Most value investors do not invest in gold (since it can't be valued properly and mining companies generally trade way above book value and net asset value, and have no pricing power--hence why many consider them speculative). But I'm not really a value investor and if gold sells off significantly, some gold mining companies or gold itself may be worth considering. If you are a high net worth investor, or even a retiree with fairly high savings, you may want to consider some gold--you won't make any money on it (it just preserves value) but it is one of the rare assets with negative correlation to stocks so is a hedge against market meltdown.

Contrary to popular opinion, companies don't all collapse to zero even if the industry falls apart; some companies successfully adapt and pursue new business, others may have a strong balance sheet (basically no debt and limited liabilities) or hidden assets that will keep them alive. If falling businesses can stabilize their business and generate consistent positive profits/cash flow, they may be good investments. They key is that they have to stabilize their business!

Right now, I'm researching a few companies that have been suffering for a long time (sometime more than a decade) but haven't yet stabilized themselves (if I feel more confident in their turnaround, I'll write it more). Some such businesses I'm looking at right now are:

(* However, do note that studies tend to show that two approaches work when it comes to long-term investing: value and momentum. If you are a momentum-oriented investor, you should avoid underperforming sectors.)