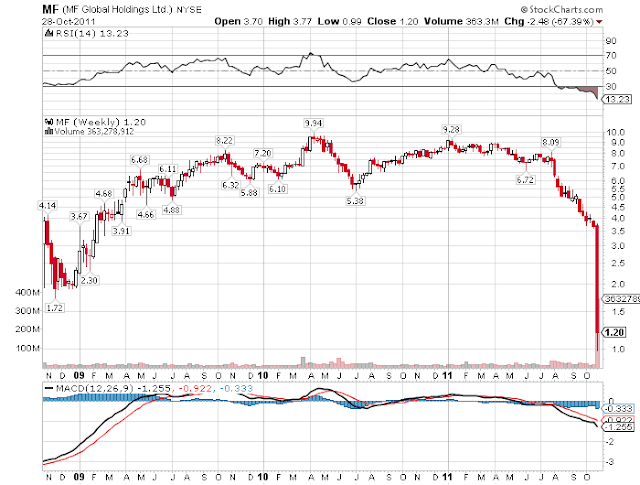 MF Global is a mid-sized brokerage firm—at the end of 2010, its market cap was around $1 billion, book value hovered around $1.5 billion, and had assets totalling roughly $40 billion—that is being sold off by the market. Investors are clearly heading for the exits and, as many market followers would know by now, loss of confidence in a financial firm often results in its end.

I don't know much about the company but it appears to be mostly focused on commodity brokerage operations. There was a commodities broker, Refco, that failed during the financial crisis era a few years ago but the problems faced by MF Global are different and may signal what may unfold in Europe.

MF Global is collapsing, not because of its commodities derivatives business, but because it appears to have made outsized bets on European sovereign debt of some questionable countries. The firm is run by a former CEO of Goldman Sachs, who was also the governor of New Jersey at one point, and he seems to have bet the fate of the firm on some dubious European bonds. As reported by Bloomberg,


Corzine, the former co-chief executive officer of Goldman Sachs Group Inc., began adding sovereign debt about a year ago, according to a company presentation. The positions accounted for 16 percent and 12 percent of net revenue in the quarters ended in March and June, MF Global said.

The firm, which has a market value of $198 million, holds $6.3 billion of sovereign debt from Italy, Spain, Belgium, Portugal and Ireland that it’s using in repurchase agreement trades with customers.

“The tactical decision to assume this outsized proprietary position highlights the core profitability challenges faced by MF Global and the scope of the re-engineering challenge facing the firm’s management,” Al Bush, a Moody’s analyst wrote in yesterday’s report.

So, basically, the company has large exposure to bonds from the PIIGS (excluding Greece) and Belgium. The reason I wanted to highlight this story is due to the fact that the company hasn't lost money yet — at least not anything catastrophic (it did post a loss last week). What is interesting is that investors in America are not willing to hang around. They are selling off this company due to its European exposure without even waiting to see what happens.

MF Global may be a precursor to what happens to some of the exposed financial institutions in Europe. Already the market has sold off several French and Belgian banks but the market hasn't lost total confidence. However, with MF Global, it does appear that the market is very bearish on any positive resolution in Europe (at least from a debtholder's point of view).