February 20, 2011 insightful
Jason Zweig wrote an interesting article for his Intelligent Investor column at The Wall Street Journal a few weeks ago. The topic dealt with two pertinent, intertwined, issues that have been raised of late. The first issue has to do with whether the recent popularity of short-term trading (high-frequency trading for instance) is something unique in history. The other issue is whether the stock exchanges favour those high-frequency traders (or others like them). If this topic interests you, I recommend that you read his full article instead of my select quotations below.

This doesn't apply to long-term investors but some in the short-term trading community have expressed their displeasure with the fact that privileged investors—those with money—get superior treatment from stock exchanges. As Zweig points out, this is nothing new. If anything, amateur investors appear to have a lack of understanding of how stock exchanges work and what drives their profitability.

The big exchanges make much of their money nowadays by providing market data to traders who move at blinding speed—not just in stocks but, increasingly, in futures, options and other "derivatives."

"Exchanges are no longer places where you primarily trade equities," says Robert Schwartz, a finance professor at Baruch College at the City University of New York. The firms that run stock markets "are fundamentally technology companies now," says James Angel, an economist at Georgetown University and a director of the Direct Edge stock exchange.

Yet these forces have been building for a century or longer. Yes, the markets are driven by short-term traders, but they always have been. And complaints that exchanges are catering to these people date back at least to the mid-19th century.

Around the time of the Civil War, the New York Stock & Exchange Board, predecessor to today's New York Stock Exchange, charged outside brokers up to $100 for the right to put their ears up to a keyhole where they could eavesdrop on the trading activity going on behind the door.

By 1873, brokers were leasing private telegraph lines to provide customers—and, presumably, themselves—with faster information and trading. Between 1889 and 1892, according to research by economic historian Alexander J. Field, the New York exchange denied telegraph access to any outsiders who didn't route orders through a network owned by the exchange. By 1913, Western Union was paying the NYSE $100,000 annually, more than $2 million in today's money, to collect and disseminate data.

These were the direct ancestors of the "co-location" and "direct data feeds" that have enabled high-frequency traders to get first crack at market prices on today's stock exchanges.

I find some of this kind of funny. Paying for the privilege of listening through keyhole? LOL I guess it goes to show how ingenious the capitalists of yesteryear were.

A key lesson for amateur investors from all this should be that, exchanges don't cater to small investors. They never did; they never do; and they never will. Don't try to pursue an investment strategy that depends on you gaining information advantage (in terms of timeliness) over the professionals with millions of dollars in operating budgets. Perhaps this skewed advantage for the professionals may be one reason short-term trading doesn't typically work for amateur investors.

History may not repeat exactly but it sure does rhyme.

It is popular for many to complain that the stock market is very short-term-oriented these days. After all, as the charts below indicate (thanks to topforeignstocks.com for the info), the average holding period for stocks has fallen below one year. 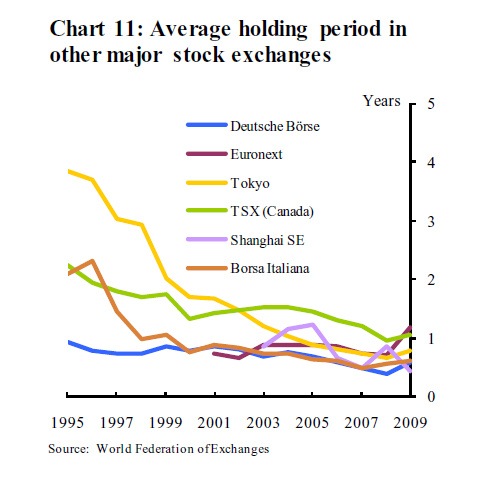 
High-frequency trading isn't new, either. By 1887, the telegraph enabled an investor in most cities in the U.S. to send an order to New York and receive confirmation of the trade within 90 seconds. Even a trans-Atlantic trade took under four minutes by the early 1890s.

As trading speed accelerated, investors' time horizons shrank. In 1901, trading turnover hit 319% on the NYSE, implying that the typical trader held onto a stock for barely 16 weeks; in 1905, turnover still ran at 240%, or the equivalent of a five-month holding period.

Only after World War I did American investors get the ants out of their pants and begin holding stocks for more than a year at a time.

After the panic of 1907, New York Gov. Charles Evans Hughes appointed a commission to investigate Wall Street; a report summarizing its findings attributed at least 75% of total NYSE volume to speculators "of the gambling type."

The NYSE holding period of around 4 months in 1901 makes the current holding period of around one year look long-term. It's kind of amazing, if you think about it, to realize that the holding period was so low in the early 1900's (However do note that the stock exchanges weren't well developed and resembled gambling dens, similar to present day Chinese markets. Insiders basically controlled everything and the SEC, or any sort of securities policing, didn't exist.)

So what does all this mean? Well, I think one lesson that can be taken away is that amateur investors pursuing short-term trading (if it's based on a strategy where timeliness of information matters) is a difficult game to play. Those with budgets—present high-frequency traders but it can be someone else in the future—get a big advantage. Secondly, I think Jason Zweig's article presents badly needed historical context on how the markets go through cycles. Sometimes market participants are very short-term-oriented; sometimes they are not. It would not surprise me if the holding period started to increase and continuously increased for the next few decades.